Today was the date for an annual gathering of portrait people at a Trait Carré gallery.  This is a nice area on the north side of Charlebourg and north of where I live.  I hopped on a bus to head there, knowing that it was likely that it would rain.  And sure enough, no more than a minute after I got off the bus, the rain started to fall, and fall, and fall. 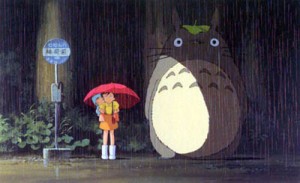 I put on my rain gear and like the silly sketcher that I am, I was still hopeful that I’d meet a bunch of other likewise crazy people and that we’d sketch together.  Did I mention that the event was to be outside?  I’m slow on the uptake but it didn’t take long for me to figure out that we weren’t going to be sketching outdoors on this day.  I think the street turning into a river gave it away.  So, I wandered back to the bus stop, thinking that I’d just grab the next bus and head home.

The truth is, I don’t know what to say when people say this.  I’ve been passionate about a lot of things in my life and none of them have been as easy to accommodate in terms of time than is sketching.  There’s ALWAYS time to sketch.  Maybe if you’re a Systine Chapel ceiling painter you’d have to budget your time but not to sketch. 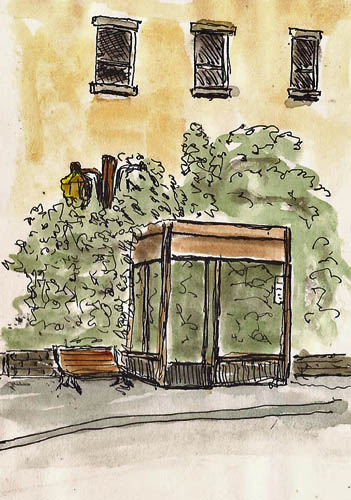 What’s that got to do with me standing at a bus stop in the rain?  Well, I knew I was going to be there for at least ten minutes so I got out my cheap 3×5 sketchbook, a pen and started looking around for something to draw.  I admit that the subject matter was somewhat limited but here are two simple sketches I did.  I quickly added a bit of color when I got home but the cheap paper is not water-friendly.  The two sketches were fun to do.  They were good practice for when I have more time.  They made my wait time pass quickly and made me regretful when the bus arrived.  No time for sketching?  That’s a good one. 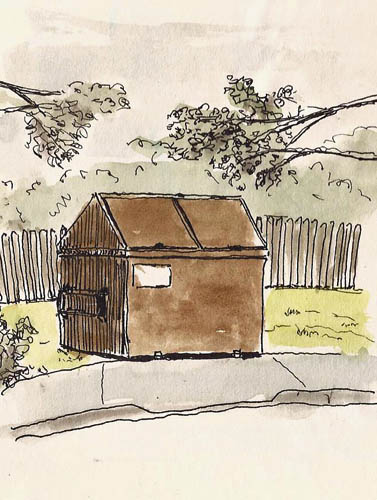 One Response to “There’s Always Time To Sketch”