Many artists never do their art on location.  They’re happy sitting in a studio, laying out drawings, tracing the layout onto their watercolor paper, and then painting from a photo, or some such approach.  For me, sketching is all about the chase.  I have to go somewhere.  It might be just down the street or even into my backyard but I’ve got to actually ‘discover’ my subject.

There are compromises in this approach.  Anyone who does it knows them.  Time, weather, interruptions and sitting on a tripod stool balancing your sketchbook are among them.   Some times are better than others, however, and I’d like to share a couple “oops” sketches with you.

The first is a train engine.  I’ve wanted to sketch this small switch engine for a long time.  It’s tied to our large grainery and is responsible for moving the grain cars around.  I saw an opportunity to draw it and sat down to draw.  It was going pretty well until…well…it drove away.  I could follow its tracks (pun intended) and did, which allowed me to complete, sort of, the engine but the mood was broken.  I became disinterested in completing the sketch by including some entourage behind and in front of it.  So here it is, as is. 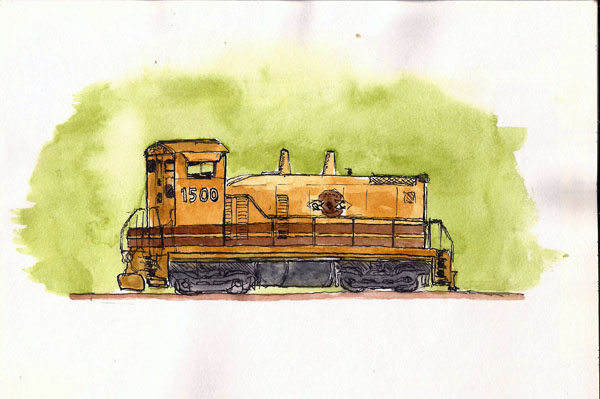 Last week we were supposed to meet on the Plains of Abraham for a group session.  Only three of us showed up because it was raining.  We ended up huddled under the overhang of a building with only a single subject, the realty business across the street. So we drew it.  It was cold and I had a hard time keeping my mind on drawing and I worked fast – too fast.  Sometimes urban sketching isn’t what it’s cracked up to be 🙂 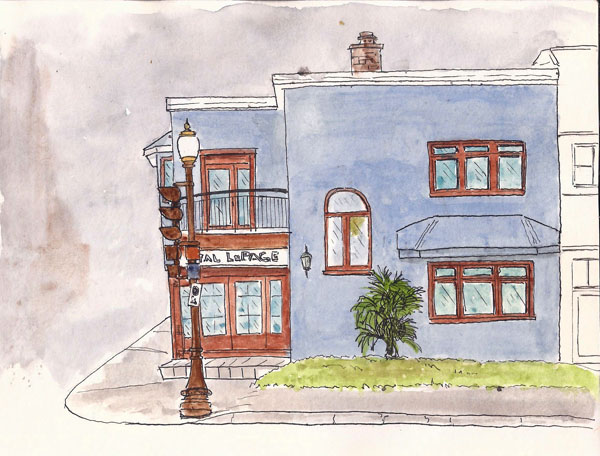 Editor’s note:  I’m getting behind in my posting.  I apologize for that and hope to get a bunch of sketches posted in the upcoming week.

6 Responses to “The Trials Of Creating An Urban Sketch”