How did people learn to draw/sketch/paint before the internet?  The availability of so much informatoin and access to so many great artists and their art has certainly changed things.  I think, for those willing to take advantage of these riches, it’s significantly eased the learning curve.  I’ve certainly benefited.

But the effects of internet sketcher interactions goes far beyond any discussions of art.  Through the sketching groups we get to visit other countries, wander their city streets, learn things about their cultures and perspectives.  Maybe more important, we learn that we’re all more alike than we are different.  It’s truly amazing.

I to tell you about a particular impact that sketches have had on my life that have nothing to do with sketching.  I call it the Liz Steel Effect.

Liz Steel is an Australian architect who happens to be a sketcher extraordinaire and a tea drinker.  I first came to admire Liz because of her great building sketches but her other favorite subject is the British style tea cup.

Until Liz, I never owned one of these beauties.  Until recently I had no idea what ‘bone china’ was.  Nor did I care.  But there were her sketches, a steady stream of wonderful tea cup sketches.

When I finally saw a tea cup and held it in my hands, I just had to buy it.  Then I bought another, and another.  At this point, my growing collection only numbers six, but I’m enjoying them thoroughly.  I’m convinced the tea tastes better. 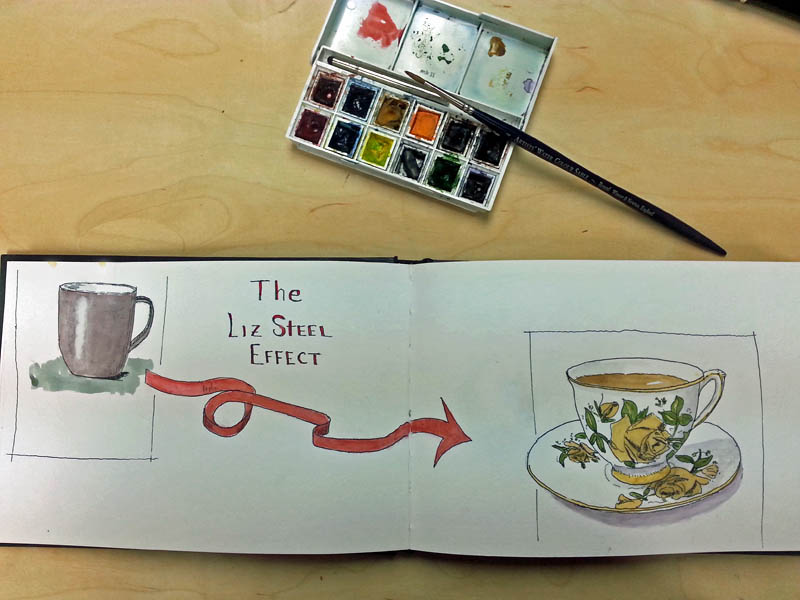 And so, when Liz’s part of Sketchbook Skool came up, I had a tea cup to draw when she showed us how.  I could even choose from among four (I’ve since bought two more) which I would draw.  In creating this sketch I learned something else, that’s probably obvious to everyone else.  It’s a whole lot easier to draw something like this when your sketchbook is laying flat on a table than it is with the sketchbook balanced on your knees like more normal method of sketching.  I might have to do it more often (grin). 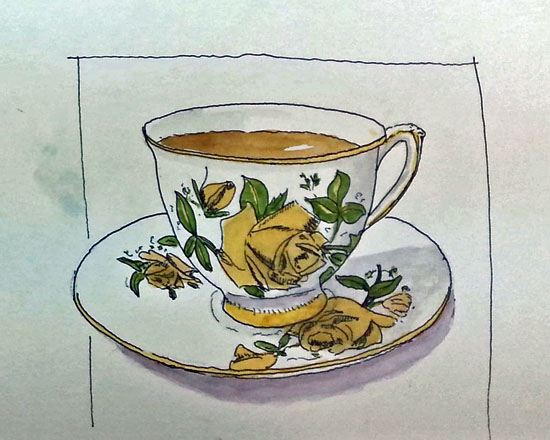 3 Responses to “The Liz Steel Effect”