I wrote earlier about the best writer procrastination tool in the world: remodeling.  It’s occurred to me, however, that lessons from our remodeling project say much about a wannabe novelist approaching their first novel.  So, I thought I’d share my thoughts with you.  Besides, I needed a break and felt compelled to write some words. I hope I don’t get too much drywall dust on my computer as I type. Oops…too late.

In many ways this is what a wannabe writer does when he/she decides to write a novel. They get an idea, then realize they need some characters, a location, and some way to develop the idea into a story. They’re not sure how it all works, often will say things like “I’m not so good with grammar” as they launch themselves into the project but, undaunted, they proceed.

We were that way with our remodeling project but said, “How hard could it be?” 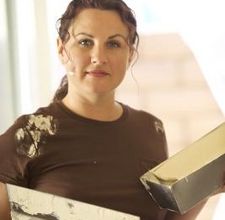 Beyond the sawzall, hammer, and belt sander required for the structural changes, drywalling amounts to mounting sheets of paper-covered plaster, covering the seams with tape, and then plastering the surface smooth. Easy peasy. How hard could it be?

The tools required are few. A knife is required to cut the drywall and a screwdriver is used to attach it to the wall. Then, simple trowels and sanding materials are required to create a smooth wall surface. Heck the tools just get rubbed on the wall until you’re done. How hard could it be?

Writing a novel is the same way, requiring only a laptop or pen and paper. You just write a bunch of sentences, run a spell check and you’ve got a novel. The budding novelist has already done the hard part – they have an idea. How hard could it be?

In both cases the simplicity of the tool set, however, is deceptive and fools the gullible remodeler/writer into a false sense of security. As it turns out, tools have nothing to do the creative process. It’s true that War and Peace would be shorter if Tolstoy had to write it on stone tablets but otherwise, tools don’t matter.

We took to the task like ducks to water. I am somewhat skilled in woodworking so cutting and mounting drywall was easy for me. Neither my wife or I knew much about drywall “mudding” but she had done some before so she was the expert, until she wasn’t. So we had to stop and read about how to do it. The reading helped considerably but there was still the problem of execution. First we had to undo all the wrong that we’d done. If not for the resultant aching muscles from the work, I’d chalk this up to practice. Then we had to try to do it properly but found that our skills were lacking. It’s hard to understand how it can be hard to make plaster smooth with a trowel but I can’t do it. I need a lot more practice.

This is the same problem a budding novelist faces. It seems like it should be simple enough. Other people do it. You just write a sequence of 50 or so scenes and you’re done. You write the proverbial beginning, middle and end of the novel. That’s all there is too it. But, just like drywalling, developing skills on the fly sounds easier than it is and results are often less than stellar, which leads to…

We found that fixing our screw ups took far longer than anything else. We also learned that the last 10% of the job required 50% of the time. We learned that getting the little details right was the hardest and that unless we got them right, nothing looked good.

And sadly, this is the hardest thing for a wannabe novel writer to realize. So many poor stories could be great ones if new writers would simply understand that the details are the most important part of writing. Getting down the bones, as some describe writing a first draft, is a breeze relative to the work involved to get the details right, having characters to come alive, and writing descriptions that stimulate a reader’s imagination. Putting the polish on the execution is the most time-consuming part of novel writing. And just like drywalling, these stages require the greatest skill and knowledge.

Damn, this is taking forever

We learned that because our drywalling skills were limited and because we were constantly repairing mistakes, this job took us twice as long as we thought it would. A professional could have done the job in one long day, maybe two if he took long lunches. It has taken the two of us a week to accomplish. Our lack of skill has been the single cause for our slow progress. Still, we did accomplish it. Next time it’ll be easier.

If one reads what writers write to other writers, one sees this same thing in their words. Seasoned writers talk of being fast, efficient, and writing thousands of words a day. New writers struggle to generate a few hundred. They claim they’re ‘blocked’ and attribute this to some ethereal being rather than the grim reality that they’re bumping up against their skill limitations. These new writers haven’t yet learned the skills that permit their ideas to flow smoothly from brain to paper. But with practice, just like creating smooth walls, a novel will come together with a healthy dose of perseverance. You just might have to read a bit and practice your skills to make it happen

Why we do it

As we stood in the room, looking at our smooth walls and crisp, plastered edges, we could have hurt ourselves trying to pat ourselves on the back, but we were simply too tired to do so. Instead we just smiled at each other and thought about our initial thought. “How hard can it be?”

And this is true for novel writing as well. When you hold your novel in your hand, or load it up on your Kindle, the feeling is awesome. And when you get to that point you’ll also know just how hard it can be. 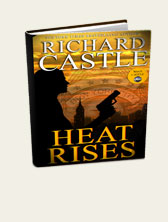 My favorite TV show is Castle.  I mean, what’s not to like?  A bestselling mystery writer following around a good-looking female homicide cop?  It doesn’t get any better, particularly if you’re a mystery novel geek like I am.

The interesting ‘twist’ from this show is that there are actual mystery novels being written under the name of the lead character, Rick Castle.  Recently a new Rick Castle website has been launched to promote the book series, including the upcoming release of the third book in the series, Heat Rises.

While the whole notion of fictional characters writing real books is appealing to me, what really caught my eye was a small section where Rick Castle answers questions and he’s asked:

What do you do when you have writer’s block?

Castle’s answer: “I don’t believe in writer’s block. I believe in writer’s embarrassment. That’s when you’re so embarrassed by the horrendous drivel you’re writing that you can’t bear to see it on the page. After all, you can always write something. I’ve discovered that giving yourself permission to write poorly is the gateway to writing well.”

Personally I’ve never believed in writer’s block, muses, and the rest of the mythology associated with writing.  And I think Rick Castle (whoever the actual author is) is right on the money.  If you realize that your delete key is a powerful tool, you can bypass all the writer’s block nonsense and get on with the writing.  Do you allow yourself writer’s embarrassment?