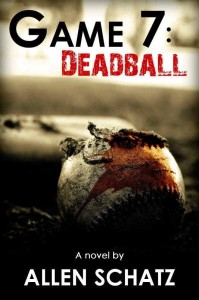 I love baseball.  Here in Quebec most people are hockey fans but I prefer to more deliberate nature of baseball.  The rhythm of the game is as relaxing as home runs and double plays are exciting.  And, right now, it’s the baseball season.  What better time to read a baseball book so when I came across Allen Schatz’s Game 7: Deadball, I had to click the ‘buy me’ button.

Secrets, lies, and revenge provide the sparks that ignite a fiery collision between past and present…

A puzzle takes shape as baseball’s World Series unfolds, but the pieces don’t fit: a string of missing women, strange threats, gambling problems, kidnappings, and relationships long dormant are all somehow connected, but Marshall Connors–major league umpire–may run out of time before he can solve the mystery.

Marshall’s season has ended and he is looking forward to post-season plans that include time in Florida, first helping his mentor teach an umpire training class, followed by a lot of sun. Those plans are cut short when Marshall is given a surprise assignment to work the World Series as crew chief, but the real reason is not discovered until he is neck-deep in trouble.

As the Series plays out, so does the truth behind long-buried O’Hara family secrets and Marshall is caught in a storm that threatens to destroy him and those he loves. With the help of his best friend, Thomas Hillsborough–ex-CIA spy–Marshall fights to solve the puzzle before the Series reaches its climax in GAME 7: DEAD BALL, the ultimate contest of survival.

The author uses the 2008 World Series as the backdrop for a thriller that includes a history of friendship between several men, who go their separate ways but who share a particular incident.  The lives of these friends converge at the World Series.  Marshall Connors, the main character, is an umpire and without giving anything away, the story involves players on both teams, Connors , baseball security, the FBI and a high-tension situation that involves kidnapping, extortion and the need to prevent these nefarious actions from derailing the World Series and possibly jeopardizing its legitimacy.

Schatz does a remarkable job with a complex plot, involving a number of points of view.  He’s taken some liberties with the real history of the 2008 World Series in that the real World Series was won by the Phillies four games to one.  Schatz needs more time for his story to unfold, so it takes the Phillies until the 7th game to defeat the Tampa Bay Rays.  Nevertheless, if you’re a baseball fan you’ll appreciate the realism Schatz injects into this side of the novel.  If you’re not a baseball fan, that’s ok too as you’ll enjoy this thriller and Schatz’ stiletto-sharp writing style.