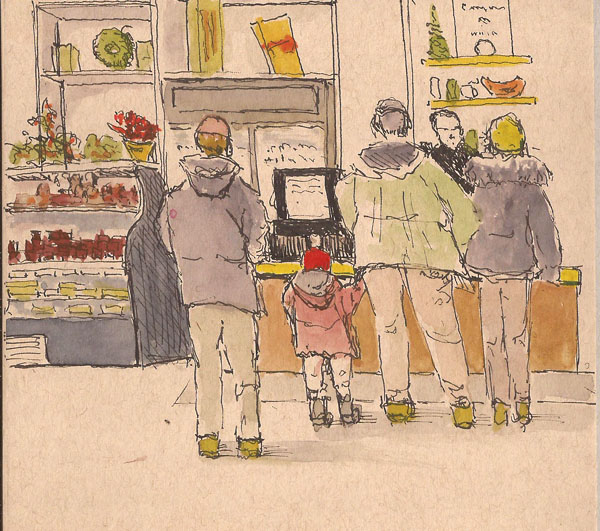 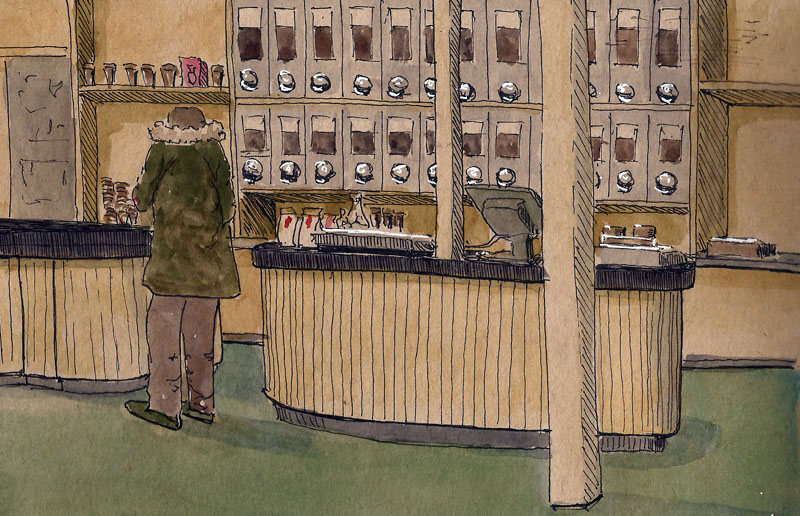 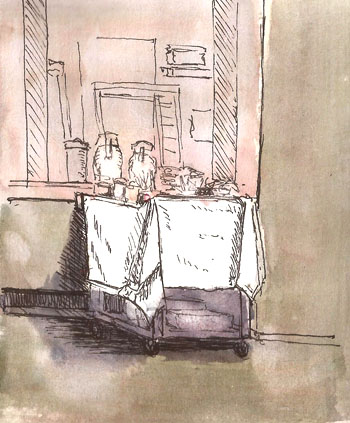 At the end of each year I look at the sketchbooks I have in progress.  If I include my two practice sketchbooks there were six of them.  Two were almost filled, though, and I make an effort to fill those before we turned over the calendar to 2020 for I can get a fresh start on the year.  Besides, both of those books were portrait format and I find that I prefer working in landscape mode. 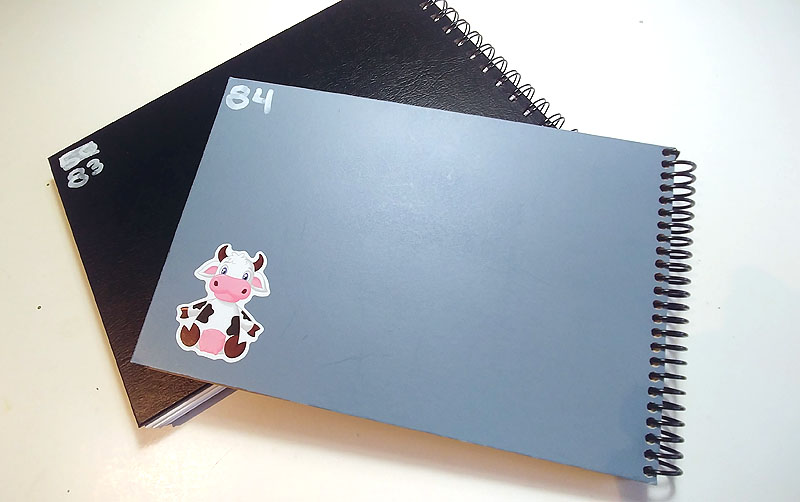 For the second replacement, however, I decided to try something new.  Out of curiosity I’d picked up a pad of Strathmore 184lb Mixed Media paper.  I cut a bunch of 9×12 sheets in half and created a 26-sheet sketchbook.  I made covers from thick cardboard and took it to Bureau en Gros (Staples to those outside of Quebec) where they neatly spiral bound it for me.

The plan was to wait until 2020 to start using them but I couldn’t wait to try the Strathmore paper so I sketched the small support table that sits to the left of my drawing table.  I really like drawing on the paper and, at least for these light washes, the paper does fine.  I think I’m going to like it even if it isn’t S&B. 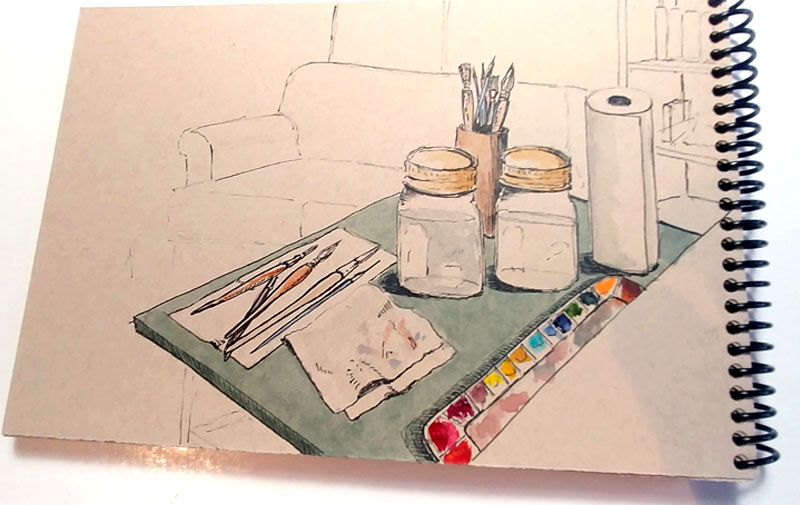 So I’m all set for 2020.  I want to thank everyone who followed my blog in 2019 and all who have taught me so much by posting their own work on their blogs, YouTube, Instagram, and the rest.  Happy New Year. 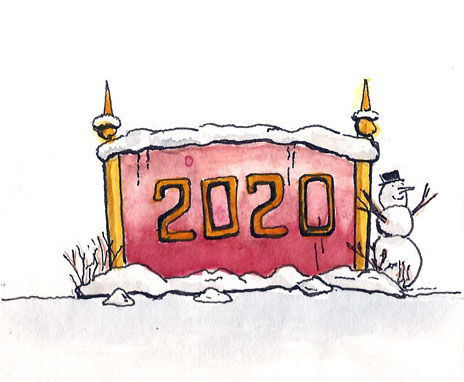 Our Grand Marche is awash in pumpkins.  I’m sure there are more apples in the building but pumpkins are a close second.  Not drawing some of them is simply out of the question.  Doing this drawing along with a cup of coffee made for a fun, even relaxing morning. 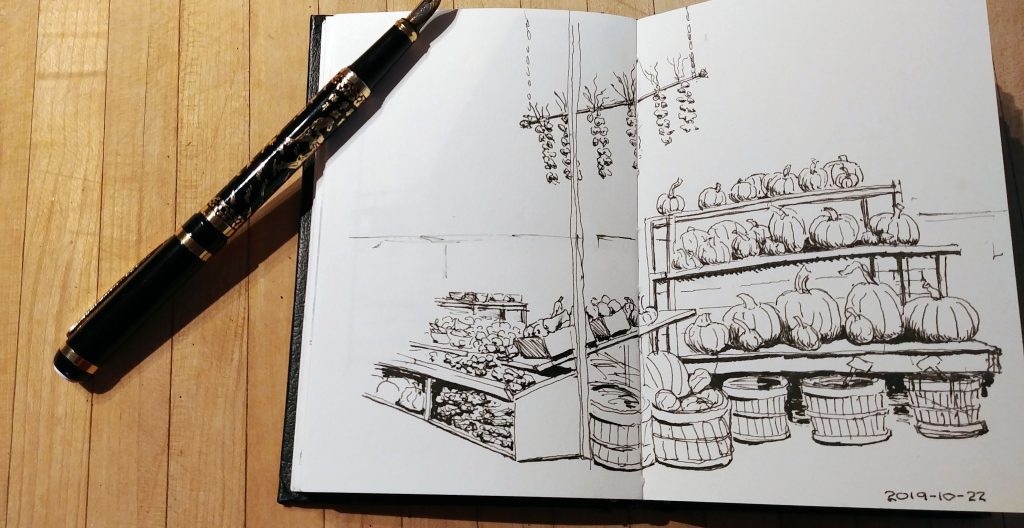 Then I added some color.  Pumpkins need color..lots of color 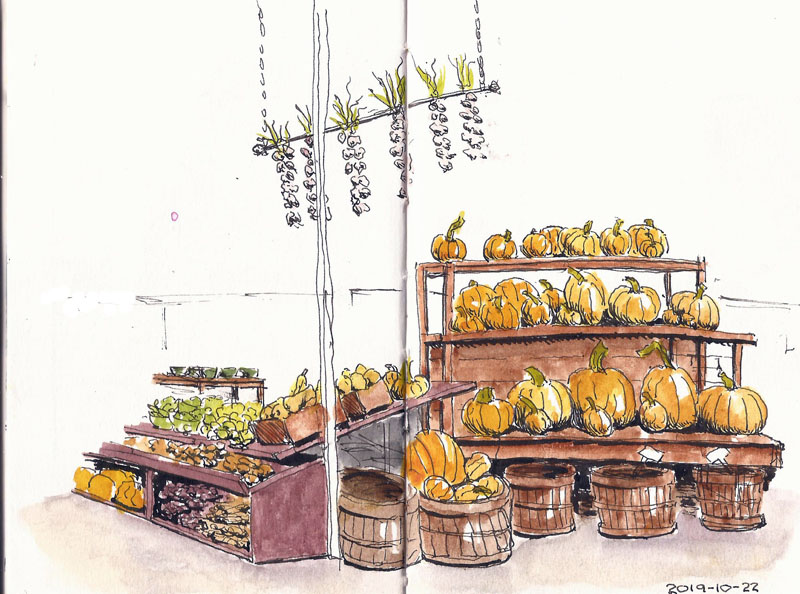 Many people are afraid of clowns for some reason.  They might be scared to death if they walk down rue St. Paul in the old port area of Quebec City because, between two buildings there is a humongous inflatable clown head scrunged between the two walls.  I think it’s cute but it could also be scary, depending upon your point of view.  I had to draw it. 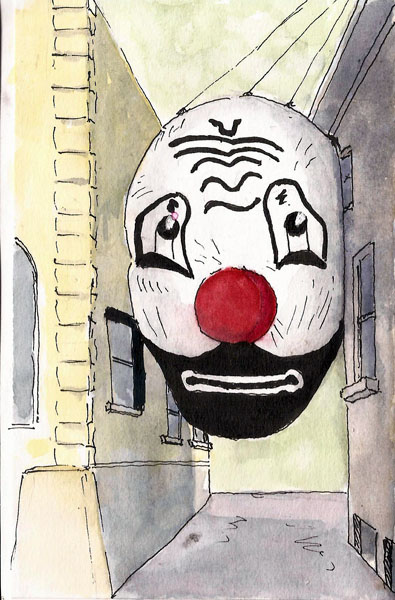 You probably don’t know who Roger Van den Hende was but that’s ok, neither do I.  What I know is that he was rich and left a lot of money for the purposes of establishing a botanical garden in Quebec City.  It’s one of my favorite places to sketch, particularly since my bad knee has limited my ability to wander the city. 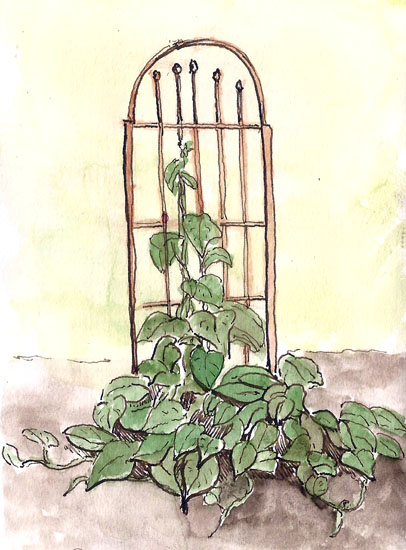 So, when Denise scheduled an event there for the Artistes dans les parcs I headed there to sketch.  This was actually a couple weeks ago and I forgot to write about it.  We had a good day but it wasn’t without some challenges.

The day started great.  Predictions were for hot and sunny so shade was at a premium.  Finding the combination of shady spot and something to sketch was challenging.  I had fun trying to follow the  growth pattern of this vine.

The ‘hot’ that was predicted came to pass and so water and rest was in order so I took a break, drank a lot of water, and then started wandering around looking for more shade to sit in.  Finding shade with something in my view became particularly hard as we were nearing mid-day but eventually I found a lily I could draw while sitting in the cast shadow from a small building.

I decided to try to sketch it “paint first”, always a mistake for me but I’m determined to learn this approach regardless of the frustration level (grin).  I began with a light wash in a lily shape and then I started adding some shadow tone… just as the clouds rolled in, killing all shadows on my flower.  If only I had better visual memory.  I persevered, sort of, doing my best to make up a shadow pattern.

At that point I had to wait for the paper to dry so I decided that I would take a break and make a trip to the restroom, which was a short hike through the garden.  I left all my stuff laying on the ground in front of my lily and headed off.  When I came out of the bathroom it was raining… on my sketchbook… only a one minute run from where I was, only I couldn’t run.  So I hobbled with a pained look on my face.

By the time I got back, my paper was now VERY wet and there was little I could do besides pack everything up, take a photo of the flower, and head for home.  I tried to salvage the sketch at home and this was the best I could manage.   DeAtramentis Document ink and Stillman &Birn Alpha paper hold up pretty well to a rain storm. 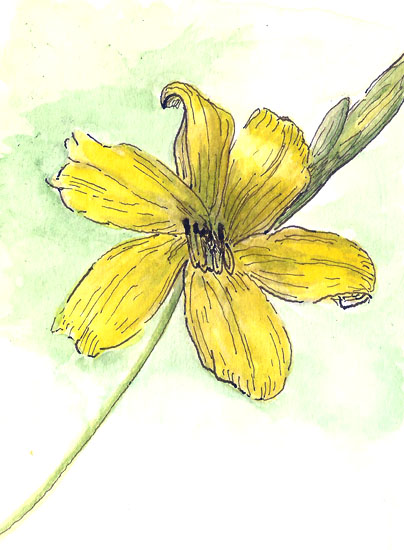