We apple picking in St. Nicolas on Sunday.  It’s a great place on the south shore of the St. Lawrence.  Very agricultural, very beautiful.  As I always do, I took my sketching stuff with me but didn’t figure I’d get a chance to use it.  We were foraging.

Apple picking is pretty light duty.  We had a large bag and wandered around pulling the red orbs off the tree.  Made me wish that money really did grow on trees as that would really be fun.

We’d filled a bag of McIntosh apples and had started on a new bag, to be filled with Lobos, when I saw this old, three-legged ladder.  I couldn’t resist and handed the bag to my wife, saying “I’ll do it quickly.”  She continued picking and I sat down, pulling out a small sketchbook of brown paper and my TWSBI Mini.

I became a kid magnet and a bunch of kids surrounded me to watch.  It was fun.  They were all very young (less than 10) and very shy but curious of this big person doing what they do all the time.  None of them were art critics.  Wanting to put on a show, I guess, I sort of cut short my actual sketching and got out some watercolor pencils.  I showed them around and then added a bit of color to the sketch.  In the end, I had an incomplete sketch but a fond memory.  Location sketching at its best. 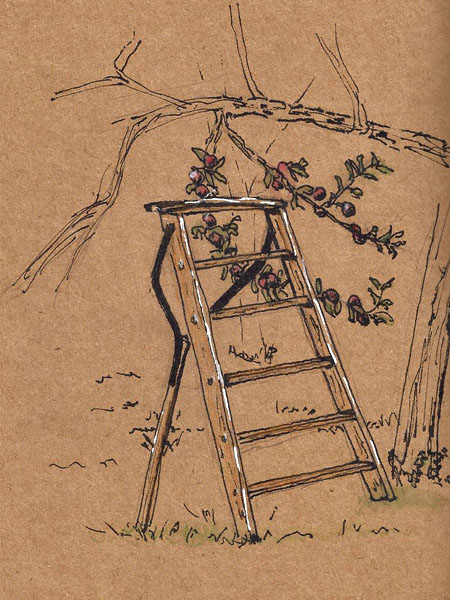