We’re still getting more rain than we should and certainly more rain than I want.  But we got a weekend that only started under rain and high winds.  We ended up with slightly damp conditions and warm temperatures.  There was this scary yellow ball in the sky.  Not sure what that was but it seemed harmless enough.

Yvan and I took advantage and we went to Artillery Park, an area in old Quebec City that has a bunch of old military buildings and fortifications.  It’s also where a munitions factory operated until 1964.  Now the large buildings are museums surrounded with park areas, cannons and high walls – a great place to sketch.  And we did.

I sketched a building called Redoubte Dauphine.  It’s an impressive structure and I set up at the base of it, sitting on the edge of a parking lot.  I sort of botched the perspective by placing a couple lines incorrectly.  As I didn’t want to restate them in their correct locations, I made the best of it and finished it with the wonky angles.  Do me a favor and squint a lot when you look at the sketch.  Maybe you won’t notice (grin).  The sketch was done in a Stillman & Birn Alpha (10×7) sketchbook with a Pilot Prera and Lexington Gray. 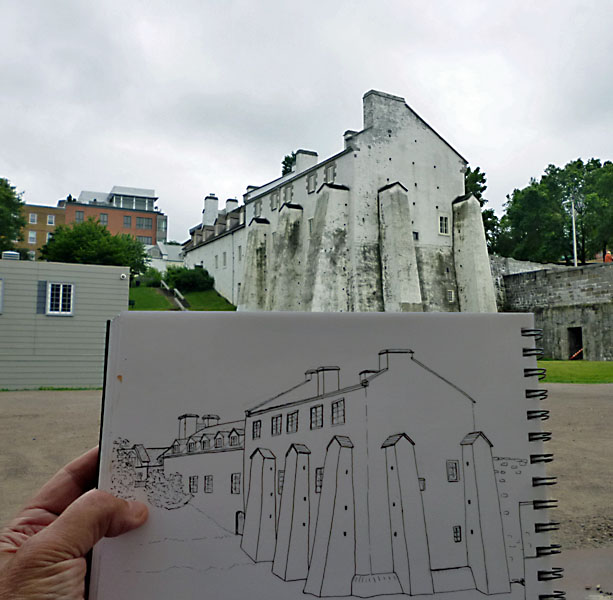 It was very hazy and cloudy so I decided to return to add color/details, when there was some sun to provide contrast.  I packed up and went looking for Yvan.  I located him, sitting high above me on a wall.  In fact, I noticed that you can see him as a tiny orange blotch on the right of the photo above.  He was sketching something and I thought it’d be fun to do a quick sketch of him.  I did it in my Stillman & Birn Alpha (4×6) with a Pilot Prera and Platinum Carbon Black. 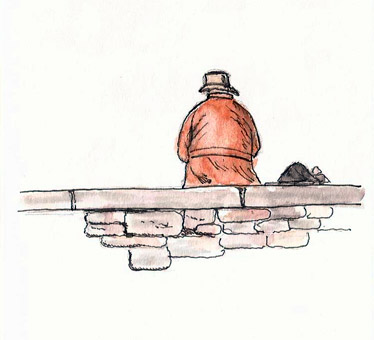 I climbed the hill you see in the first sketch and entered a tiny park area associated with what was once an officer’s quarters.  I liked the shape of the end of that building and so quickly sketched it.  Same small sketchbook; same pen/ink. 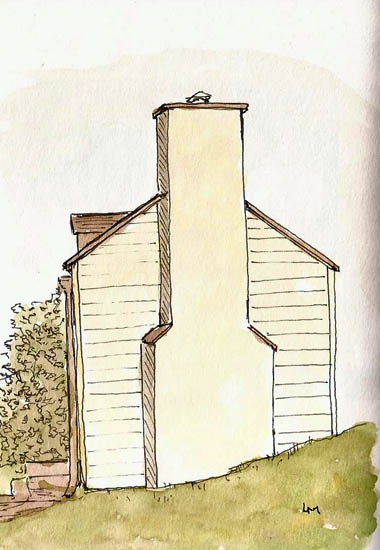 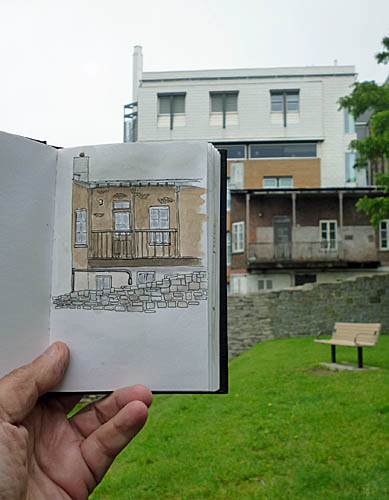 The eastern edge of Artillery Park is bordered by an old rock fence.  On the other side of it there’s a grand old apartment building that’s no longer inhabited and, sadly, it’s crumbling from neglect.  It pokes its second story above the rock wall and I liked the view, of the back of the building and so I sketched it.  Same sketchbook, same pen, same fun experience.  Every sketching day is a great day. 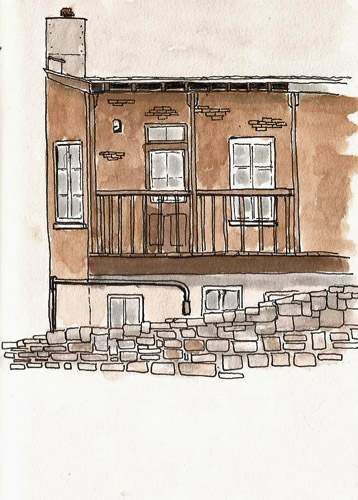