I love drawing the ornaments and carvings in churches but confess that I find most churches to be pretentious.  Still, there I was, in the chapel associated with the Musée d’Amérique francophone when I got the bright idea to sketch the huge, monolithic, altar.  Because of the complicated nature of it, doing a proper, accurate drawing would have required many hours.  I only had two.

So I “steeled” myself (i.e. tried to channel Liz Steel) and set to work.  My eyes crossed several times as I tried to draw all the bits and details of this 30-foot high structure.  It was both fun and tiring, and it humbled me a bit, which I guess is the goal of such structures. 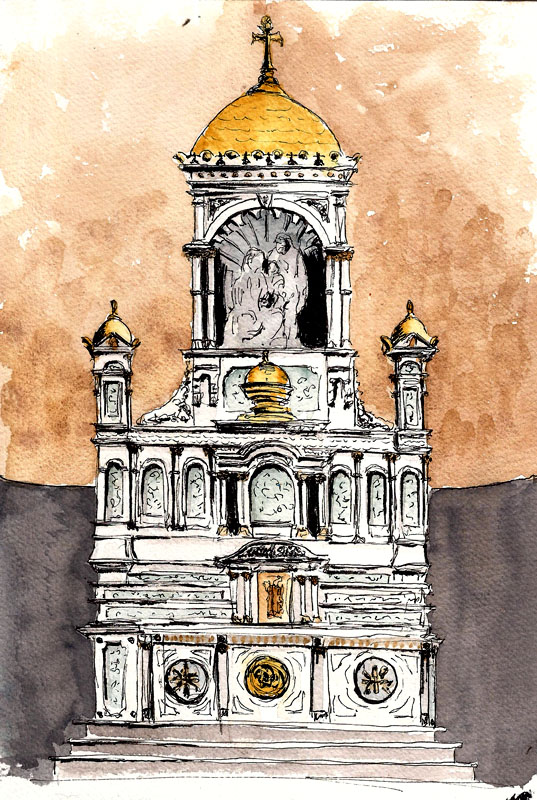 I was still resurrecting our house from the recent construction and so couldn’t get out sketching, but I was desperate to do something other than quick doodles.  I was reading the newspaper over lunch when I came across a picture of the top of our city hall and decided to sketch it.

I don’t sketch from photos and other than quick doodles, I rarely sketch at home, so this was…what’s the word… err… uhm… oh yeah… DIFFERENT.  I was sitting at our kitchen table, in a real chair, with paper resting on a hard surface.  What a difference that makes.  It’s a lot easier to draw this way than perched on my tripod stool on location.  I can’t say its as much fun but maybe I should do it more often.  Anyways, here’s the top of Quebec City’s seat of government.  Tomorrow I’m heading to the museum. 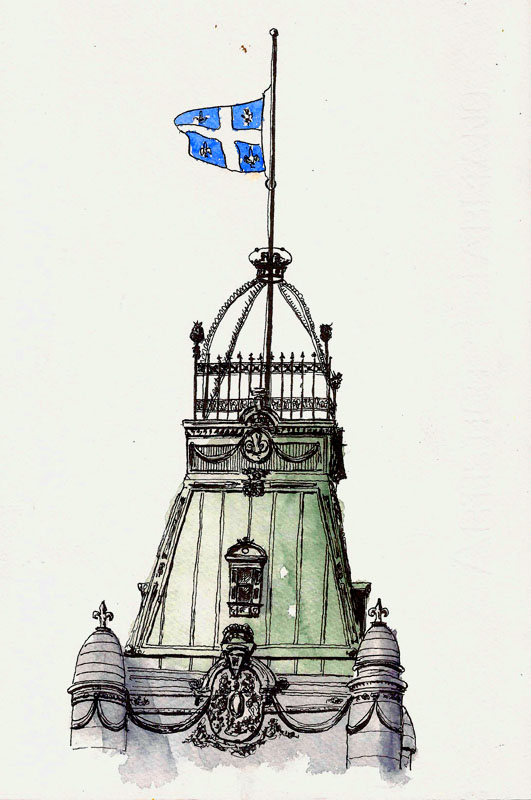 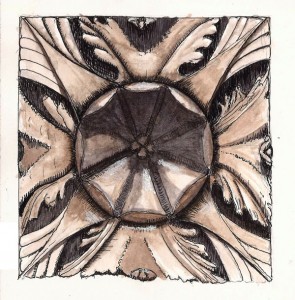 Not long ago I posted this decorative square and talked about how we’d started drawing these squares in a chapel.  I also mentioned that I was going to work on methods for painting/shading them.

These wood-carved squares are probably not even noticed by most visitors to the chapel because they’re dark mahogany and blend into the mahogany wainscotting that runs around the chapel.  Yvan ‘discovered’ them and we’ve both been thrilled with the idea of drawing them.  I find them challenging.  Yvan just makes them look beautiful (grin). 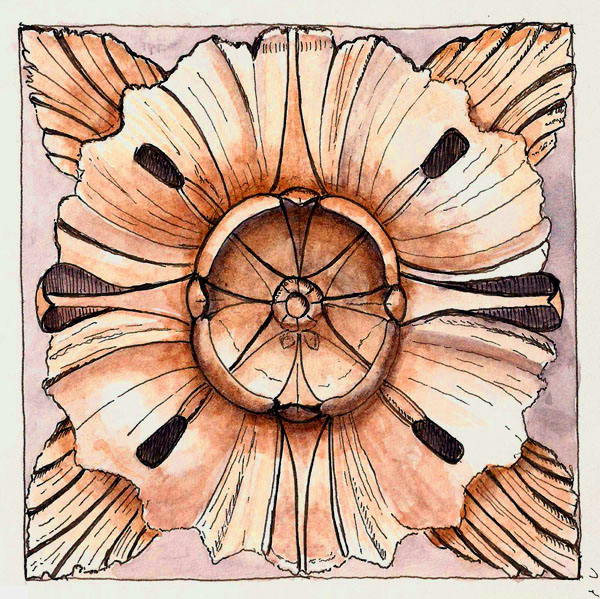 We’ve continued drawing them and I have been experimenting a bit with approaches to shading them.  The process is teaching me quite a bit about watercolors and their use, at least the way I want to use them.  Which one looks best to you? 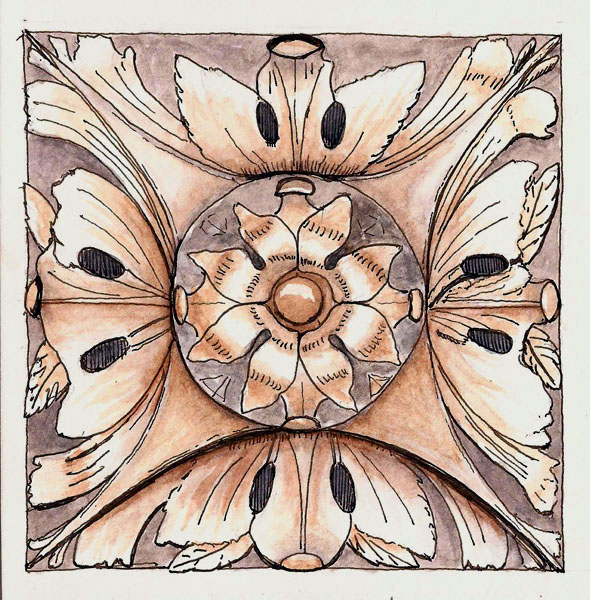 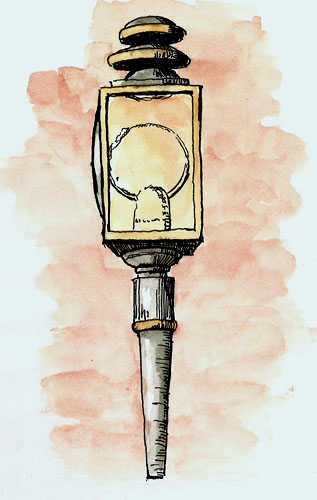 There is an exhibition of carriages and sleighs at our Musee de la Civilisation and it’s about to end.  We’ve drawn of it in the past but the room is so poorly lit that it’s hard to see what you’re drawing.

But Yvan and I decided to brave the dark a bit more and to draw some of the carriage lanterns before they were pulled from their dark places and sent back to the well-lit storage barn where they are stored.

These are fun to draw because of their complex shapes but I can’t guarantee that my sketches are correct.  Often I couldn’t tell whether something is square or round because the room was so dark, so these are more a guess than anything. 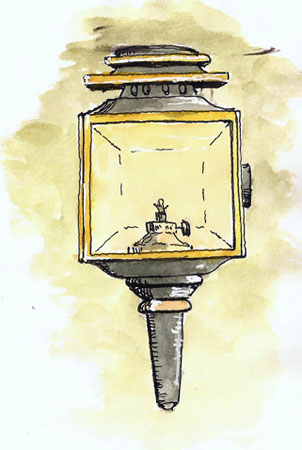 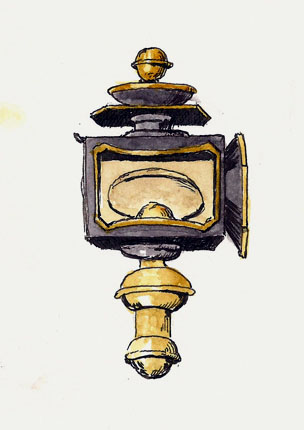 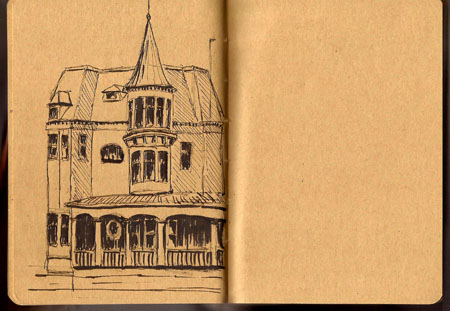 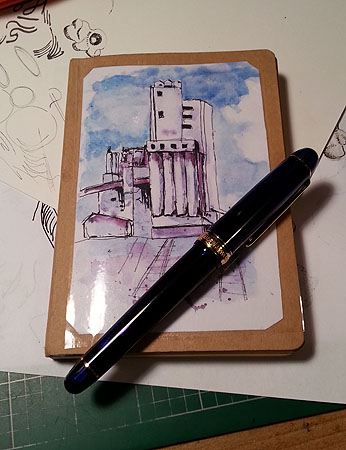