With winter upon us we’re into cold weather sketching routine, which means doing things indoors.  Still, we like to sketch together and so, every year, we reserve a room at our local library and draw/paint Christmas cards.  I’m not much of a card giver but this event is a lot of fun.

Sitting in a room without a subject wreaks havoc on my lack of imagination and this is reflected in my results.  I’ve seen a lot of examples of a red vehicle carrying a Christmas tree and so that was my first stop.  I found a volkswagen photo on my phone and went to work.  This was the result: 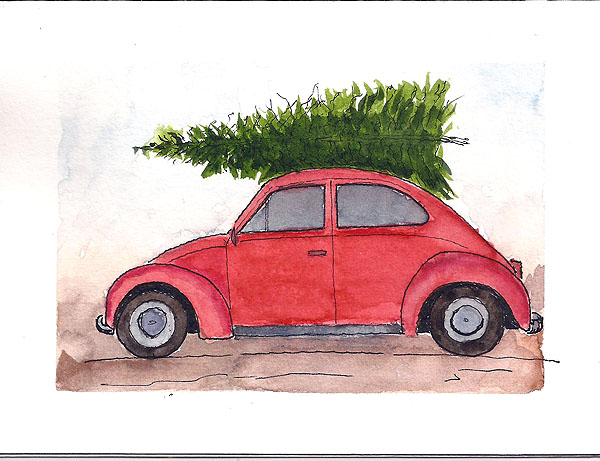 I decided to draw a little house and remembered a few examples drawn by someone on Instagram.  Sorry, but I can’t remember her name.  Anyways, I drew this one from a memory of those little houses.  Hers were better. 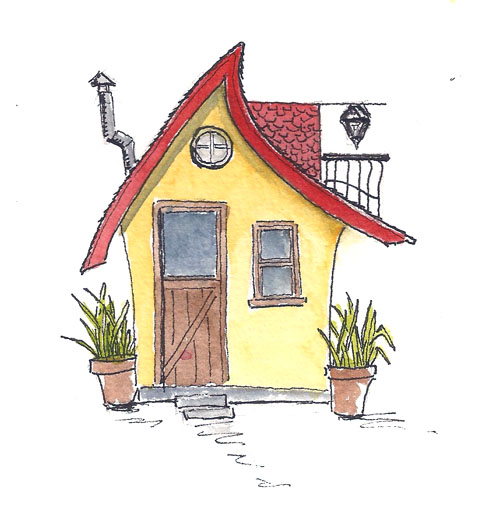 I thought about snow and got out some white gouache.  The sole reason for this one was that I wanted to spatter white gouache to make snow because I’d never done it before.  The rest was an afterthought. 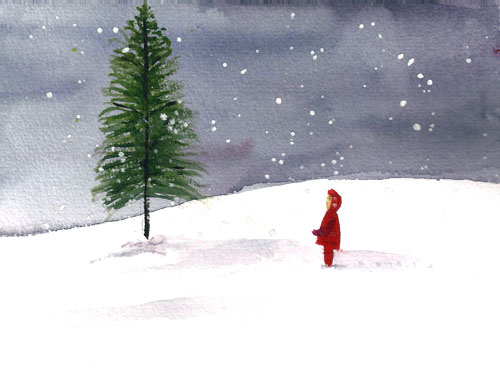 As always, card-making day was fun, with lots of laughs and time with good friends.  The cards produced weren’t the real goal anyway.

For sketchers in Quebec City, the beginning of winter is marked with our migration from outdoors to the museums.  We’re now at the museum, a place that doesn’t seem able to pay its electric bill.  At least it seems that way as they decided a year or so ago to start “lighting” their exhibits with lots of dark.

Currently there are two exhibits in our Museum of Civilisation that are dark, one being a really nice exhibit on poisonous animals and plants, at least the parts of it you can actually see are nice.  There are some things where even putting your nose to the case glass isn’t sufficient to see the details of the object on display.  It’s said that museum clients spend mere seconds looking at any object.  Maybe this is how the museum is trying to slow them down.  I don’t think it’s working. 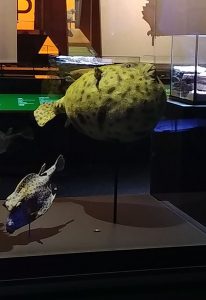 I decided to draw this porcupine fish.  I took the photo from a position that provided some backlighting of the fish so you could actually see it…almost.  While drawing it I had to make several forays up close to find out where the fins were.  Unlike many porcupine fish, this one didn’t have a lot of spines.  There were some short ones on his belly but otherwise his skin was smooth.  One thing was certain, however, I had to draw this sketch in a somewhat comical fashion.  This guy just deserved that treatment. 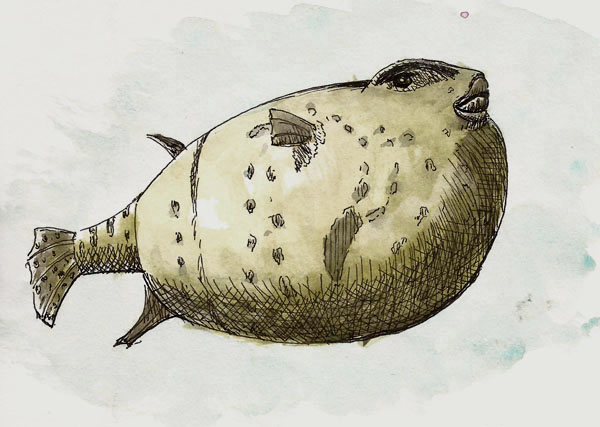 Quick biological fact of the day:  Porcupine fish (aka blowfish) are popular with suishi eaters with a death wish because blowfish contain a very toxic compound called tetrodotoxin.  This stuff is 1000 times more toxic than cyanide.  I’ve seen references to how poisonous the spines of a blowfish are but that’s not true.  The toxin is in the internal organs, specifically the liver and gut.  I think I’ll stick with salads myself. 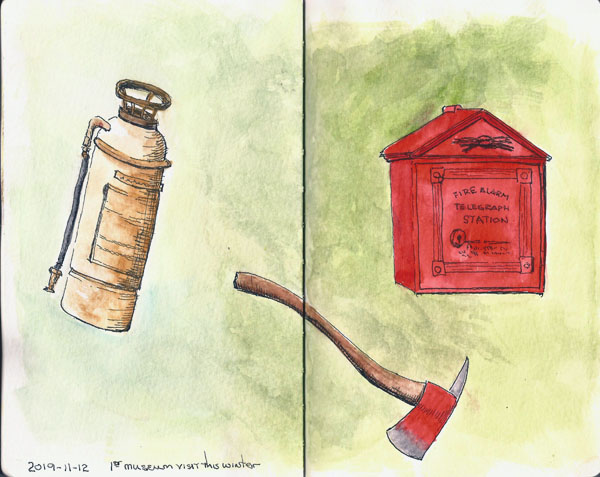 I’ve been spending a lot of time lately making various blotches of gouache on paper and watching YouTube videos on its use.  At this point I’m thoroughly confused.  Of course it’s possible to use gouache just like watercolor but it seems that its real power is when you start applying it in more opaque layers, which moves it closer to oils in both application and in how you mix colors.  As I said, I’m thoroughly confused.

I got tired of making endless color spots, color wheels, etc. and decided I should try to paint something.  I chose one of my favorite little stores, Le Coin.  The result doesn’t do it justice as I don’t really know how to handle gouache in any context, including Le Coin, but here it is – my first gouache painting. 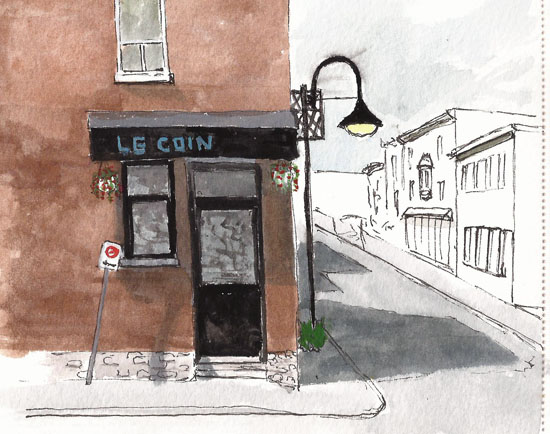 More than anything, this post is an X on the calendar to indicate when it got too cold to sketch outdoors in Quebec City.  It’s snowing these days and not very friendly to street sketchers, particularly an Arizona-bred sketcher who hates being cold.

I take the bus everywhere and our system is great because I can sit at home and know exactly when the bus will get to my stop which means I don’t have to stand in the cold.  But, for reasons I can’t explain, the other day I headed to the bus stop without checking my app and sure enough, just as I arrived, the bus was pulling away.

That meant I had ten minutes of standing around.  As luck would have it there was a small bulldozer sitting on the corner of the street so I decided to draw it.  I did this quick sketch of it and nearly finished when the bus came along. 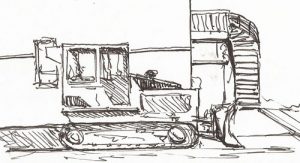 This was done in a cheap 4×6 notebook and so wasn’t suitable for color but I added some anyway.  The end result looked like this.. my last outdoor sketch of the year.  It’s museum time for me. 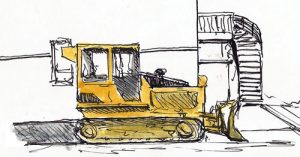