What do you get when you combine a fantastic urban sketcher group with a great city cultural center, who happens to exist in a beautiful mansion and grounds along the shore of Lake Louise?  The stuff that dreams are made of, at least for this sketcher.

I was determined to get to Montreal for at least one of the USK-Montreal group’s sketchcrawls this year and it was only by “guess and by golly,” as my dad used to say, that I chose the one scheduled for July 5th.  It was to be held on the grounds of Stewart Gallery on the opening of a exhibition of art by Jane Hannah, Shari Blaukopf, and Marc Taro Holmes.

Sunday morning I headed off with my buddy Yvan.  There’s nothing better than traveling with another sketcher as time flies as art discussions, discussions of the cool house with the red roof that we just passed, how the distant barns and tree line would make a nice sketch, and all the rest of the stuff that sketchers talk about took place.  In no time we were there…and my jaw dropped.

The Stewart Galleries is an amazing place but what was more amazing were all the sketchers dotting the landscape.  There were dozens of them.  No, there were more.  One count suggested there were 80 of them…all in one place, all of them sketching, chatting and having a great time.

My eyes were in information overload.  This was a wonderful place to sketch but whose got time to sketch when there are so many sketchers to meet, so much art to see.  All I could do was walk around talking to people.  I finally got to meet Shari Blaukopf and Jane Hannah.  Both are as wonderful as I supposed them to be from internet interactions.  I found Jane by walking up to every red-headed woman, asking if they knew Jane Hannah.  It was the one time I wished there were fewer people there, but I finally found her and met all the red-heads.  That’s gotta be good, isn’t it?

The Stewart Gallery was amazing.  The event coordinator, Amanda Johnston did an incredible job, as did her staff.  I’ve never been treated so well as a sketcher.  They provided coffee, snacks and free ice cream.  If you wanted, they even had pencils, paper, and clip boards available for those who came without their sketchbooks.  What was particularly great was that these offerings were used quite a lot by those attracted to the event by the USK-Montreal group.

Finally, guilt got the better of me and I decided that I really needed to draw something so I sat down at the edge of the lake and drew this view, looking away from Stewart Gallery towards the Pointe Claire marina.  It’s not my best work as it was rushed and my head was spinning with excitement.  Nevertheless, it is evidence that I sketched at the event.  Then it was back to talking, viewing the new gallery exhibit and enjoying the day.  Thanks to all who made the day so fantastic. 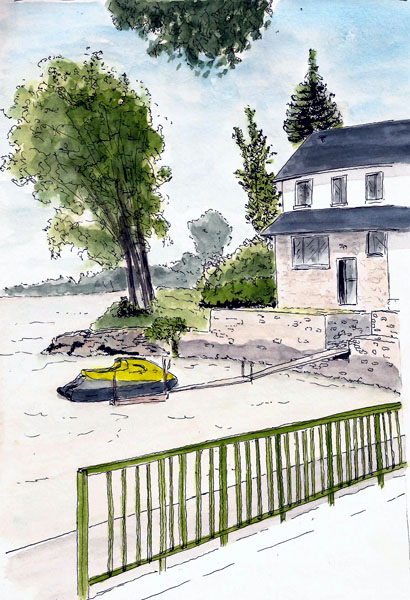