It’s now 2018 and I’m hoping there will be fewer doctor and physio appointments this year.  I’ve tried to doodle my way through the last few months of 2017, working on using my elbow and shoulder more and my wrists less.  I draw small, though and find that transition to be tough sledding, particularly for drawing small-size curves that my wrist just won’t do.

Nevertheless, if I made any resolution for 2018 it was to get back to drawing.  This morning I decided to draw a scene from a photo.  My wrist was feeling “pretty good” which is my shorthand term for “it’s not locked up and doesn’t hurt constantly” and so I grabbed a Platinum Carbon pen and a 5×7 piece of Fabriano Artistico CP and tried to capture a photo I had of Quebec’s Finance Building.  The pen isn’t flowing like it once did, probably because I’m being too careful about how I’m moving my hand, but I did produce a sketch and I share it with you here.

Hopefully things will improve as I get back into it.  I sure hope so because Liz Steel’s new watercolour course starts January 10th and I hope to do a lot of fuzzy stick practice ‘real soon.’ 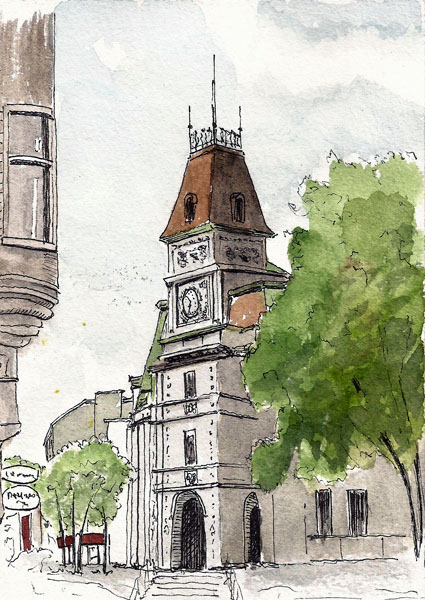 Sailing, sailing,
Over the bounding main,
For many a stormy wind shall blow
Before Jack comes home again!

I remember this bit of a song from when I was a kid.  I’m not sure why.  I’m less sure how.  But it bounces between my ears every time I get a chance to get on a boat. 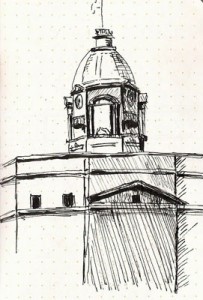 I was out walking and ended up near where the ferry docks on the Quebec side of the St. Lawrence River.  I was looking across the river at the new ferry complex on the other side and decided to take a boat ride, but the two ferries had just started swapping places so I’d have to wait a bit.  I sat down and got out my Field Notes book and did this quick sketch of the top of the old post office building.  More a scribble than a sketch but, after all, it was done in my ‘scribbler’ so that was appropriate. 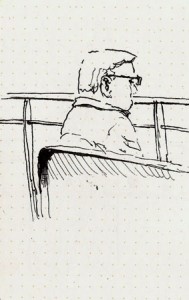 I boarded the ferry and wandered around its decks, letting the fresh almost sea breeze blow across my face.  I’m lucky to live in a place where I can be “on the bounding main” with nothing more than a swipe of my bus pass over a card reader.

I’d like to talk about taking a three-hour tour like Gilligan but the truth of the matter is that it takes only about 10-minutes to get to the other side.  I did get a couple quick-sketches done. 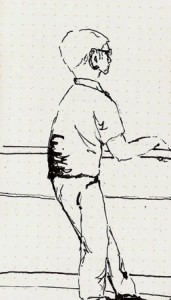 Once on the other side I wandered around, looking at the on-going construction, trying to figure out what the overall plan was for this new place.  I decided that I wasn’t smart enough to understand and took a wait and see attitude.  I went inside.

Once you get through the turnstile to get on the ferry heading north, you climb stairs to a large room with a wall of glass.  What a great view of the Quebec City skyline there is from there.  I’m going to have to go back when I’m in the mood to do larger sketches but on this day, I was in quick-sketch mode.  I got out a larger, but cheap sketchbook (6×9) and did a 5-minute pencil scribble of the skyline.  It’s not much but it will motivate me to get back there to do something better and provide a good excuse for another boat ride. 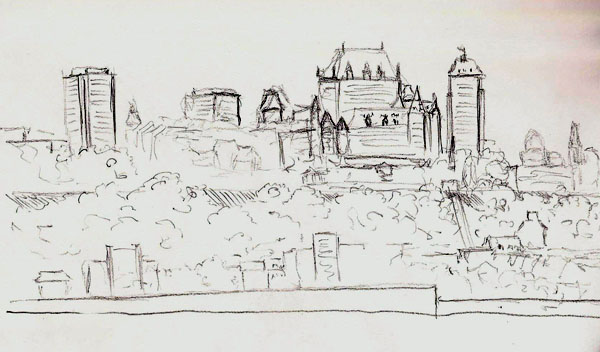 A bell went off and like a bunch of cows we were all herded through large doors and onto the ferry.  I felt inclined to say ‘moo’, though I don’t think that translates well into French. 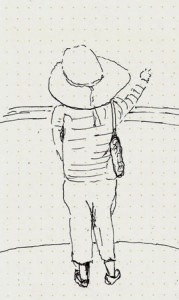 I watched a small tugboat chug by as the ferry was pulling away from the quay and once we started crossing I was amused by a couple sailboats trying to change course and/or stop so the ferry could proceed.  Once that show was over, I got out my Field Notes book again and did a couple more people sketches, this time using my Platinum Carbon pen.  It was a great day to be sailing on the bounding main.  What is a bounding main anyways? 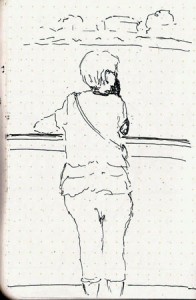 My wife, Chantal, took a vacation day and I coerced her into going sketching with me.  She’s quite good at sketching but is convinced otherwise so it’s a special treat when I can get her to go out with me.  I think it was my sneaky approach of suggesting a nice, relaxing time sitting in the shade at the Zoo Park that did it.

I really have no idea what name is currently slapped on this park.  It may be the Parc des Moulins but don’t quote me on that.  What I do know is that it’s a sad reminder of a bad political decision that resulted in our city losing our zoo.  The park that remains is nice but not nearly as nice as when the trees had to share space with monkeys, bears, and eagles.

But we did find that shade, which disappeared half-way through our drawing.  I think the tree we were shaded by moved.  We took a break, ate a nice lunch and then continued to finish our sketches while sitting in the sun.  Sometimes you gotta do what you gotta do. 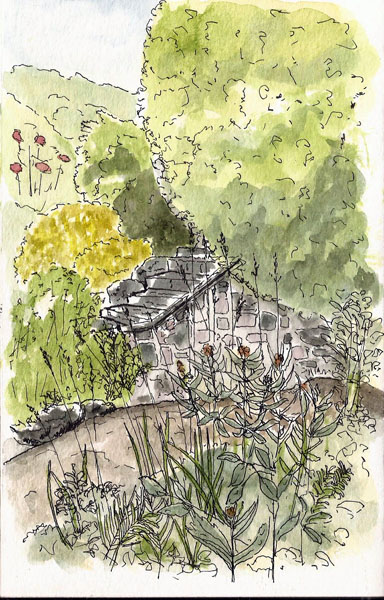 When we finished up I suggested we stop and get an ice cream cone, knowing this would be get a positive response.  We went to a store that’s in a house that looks exactly like the one the Adams Family inhabited and sat outside, in the shade of course, and enjoyed a slight breeze that kept the high humidity at bay.  There was a nice, tall clock in the courtyard and I did this quick sketch of it in my Field Notes “scribbler.”  I continue to be impressed with the paper in this new Field Notes issue. 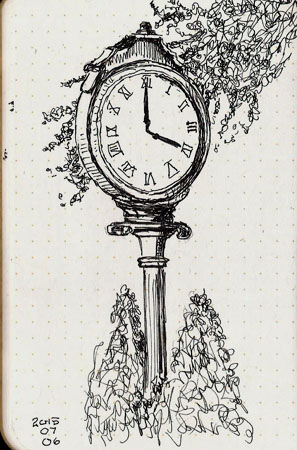 I do a lot of sketching in tiny, inexpensive sketchbooks and ever since Marc Taro Holmes suggested using a Moleskine staple-bound notebook, I’ve been trying different notebooks in this 3×5 format.  I was very displeased by the Moleskines as ink bleeds through their thin paper.  So far, every book I’ve tried has that problem.  I’m not talking about ghosting, where you can see the sketch on the backside but ink that actually shows up on the back of the page.  While ghosting is also a problem in most of the notebooks, I’m more tolerant of that as my goal with these books isn’t high-quality sketches.

But FINALLY, I’ve found what I’ve been looking for and it comes in the form of the new Field Notes Workshop Companion issue.  Field Notes are fun because they’re sold in a variety of cover formats.  The problem with them is that they typically use 50lb, inexpensive paper and they’re just not fountain pen friendly.  If you draw with ballpoint pens, they’re fine and very convenient.  But I’m a fountain pen addict and it’s a no go as a sketching substrate.

The Workshop Companion books are different.  They  come with a new, 70lb paper that’s a higher quality than even the couple issues they’ve produced with 70lb paper in the past.   I find I can force ghosting to the point of being annoying but it requires that I really dump a lot of ink on the page.  So far I’ve yet to get any bleedthrough, even with brush pens.  I’ve even applied bits of watercolor to the paper and even that works pretty well. 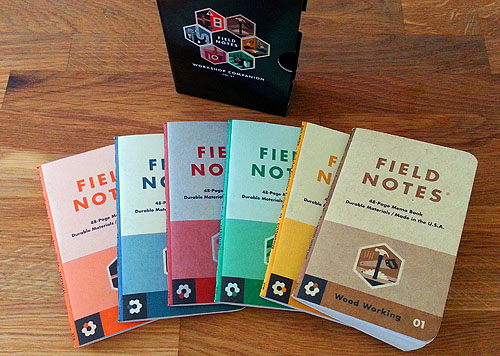 My first test was a simple outline image, done with a Platinum Carbon Pen and Platinum Carbon ink.  This was a ‘soft’ test as most of these kinds of notebooks will handle this combination, though in this case there was no ghosting whatever, which was an improvement. 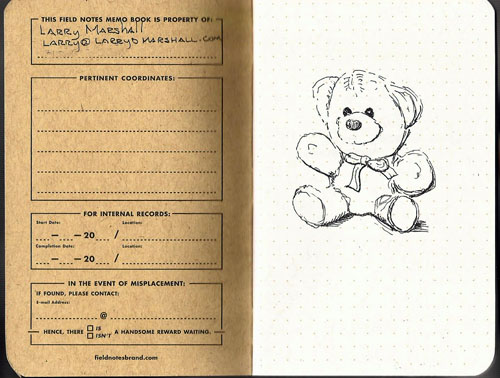 I went out sketching and did these quick sketches.  My goal was to try adding some dark shading to see what happens.  This is where most books in this format fail, with both bleedthrough and ghosting.  Here there still wasn’t any bleedthrough and you had to look hard to see ghosting.  Scanning didn’t pick up any of the ghosting. 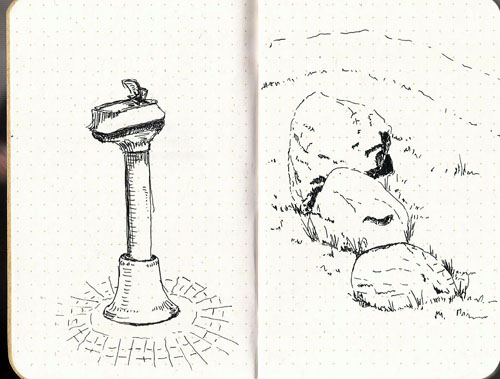 No special tests here but I was drawing with my Namiki Falcon and De Atramentis Document Black and again, there was no bleedthrough and ghosting was hard to see. 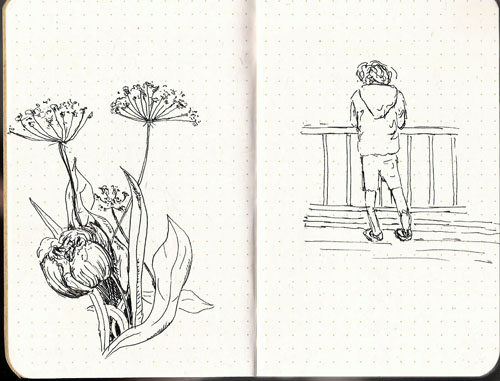 I was doodling while watching a baseball game and dragged this image up from my imagination.  It’s got enough darks in it to really test for bleedthrough and ghosting.  Ghosting can be seen but again, it’s minimal. 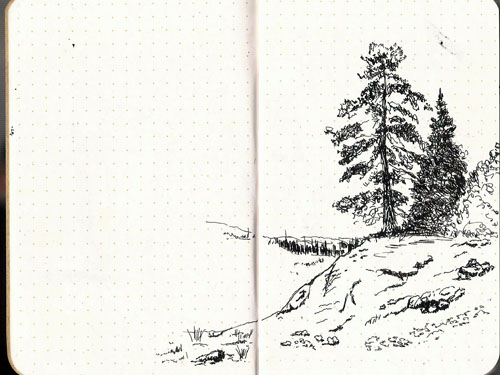 I thought I’d do the acid test.  I was watching some guys playing soccer and started drawing this building that was at one end of the soccer pitch.  I added some darks with a Kuretake #33 brush pen and then added some color.  Still no bleed through.  Ghosting is a bit worse but everything’s relative as the ghosting doesn’t get picked up when scanning the backside of this sketch. 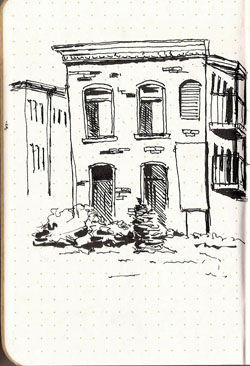 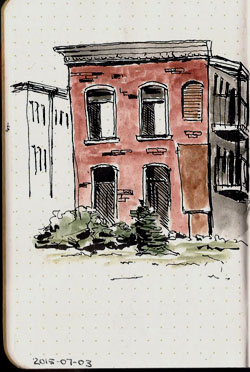 In conclusion, I’m a happy camper and I’ll be ordered some more of these Workshop Companion books.  They’re wonderful.  I can shove them in a shirt pocket if I want but more often I have it in a front pouch in my sketching bag so it’s immediately available.

While I can sketch in these books fine, when sketching a 2-page spread it’s nice to have something to hold the book open and flat without having to fiddle around.  I solved that by cutting a small piece of Fomecore, which weighs nothing and I clip the book to this backing board.  It works surprisingly well and really makes holding the book a lot easier. 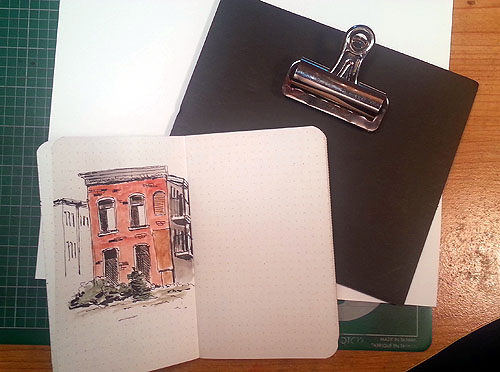 This is what it looks like when clipped to the board.  It becomes a single unit where you don’t have to worry about keeping the paper flat. 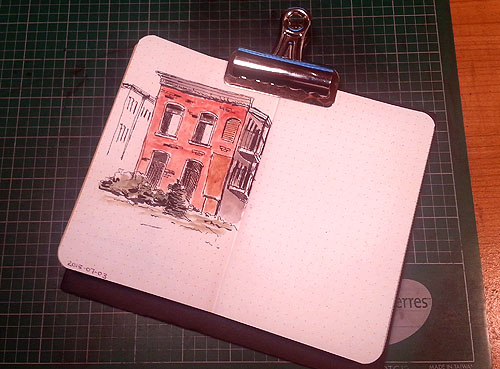 I’m desperate.  I really am a building sketcher and winter sends me indoors, to museums, concerts, etc.  Not many buildings to be found inside buildings. 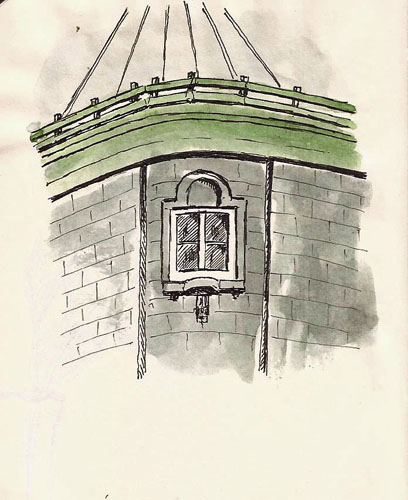 But when there’s a will, there’s a way, at least in a limited fashion.  If one is lucky, one can sit by the window in a coffee shop and sketch the outdoors.  I searched a bit and got lucky.  Here’s a couple small sketches I did while looking out of windows.  I’m ready for spring.  How about you? 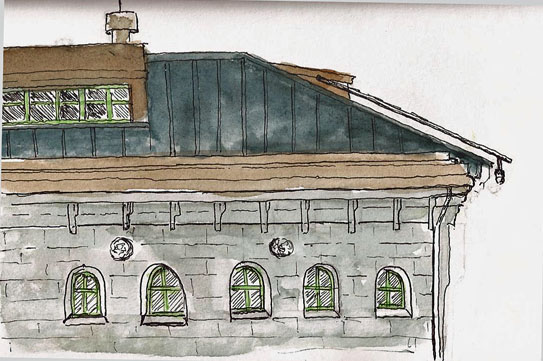 This one was hard to do as I had to lean over a bench and a heater so I could look out a small window in the old jail that’s now associated with the art museum in Quebec City. It was to see and balance sketchbook at the same time. Stillman & Birn Alpha (4×6), Platinum Carbon pen.