I love the doors of Quebec.  I’ve often thought that an entire sketchbook filled with doors and windows of Quebec City would be great.  If were even a little bit organized in my approach to sketching, I might just do one.  For today, though, here’s a single door, well actually two of them, done from a photo (my photo) on 7.5×11 Fabriano Artistico cold press.  I love this paper but it’s a bit rough for my very fine fountain pens. 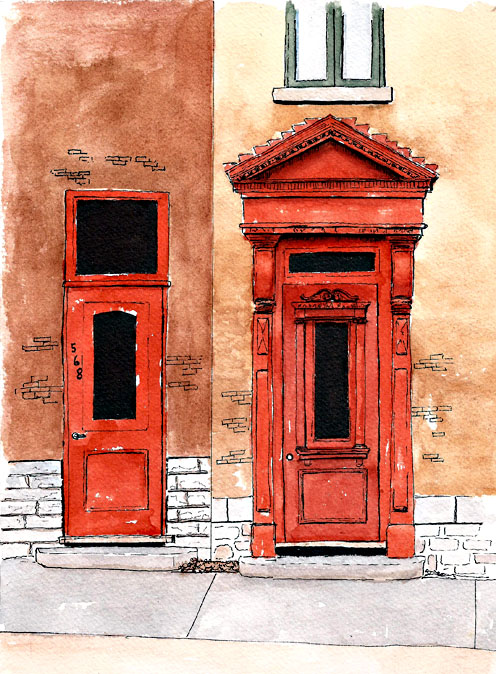 I’ve mentioned that this winter I was going to try to learn to draw at an indoor workspace and to draw from photos.  I know it sounds odd to those of you who do it all the time, but I’ve spent five years drawing on location and have a really hard time drawing in a ‘studio’ or from photos.

In this I’m very much like the dog that’s got to walk around in circles a couple times before it lays down.  Location sketching, for me, is about discovering something to draw, which requires wandering a bit.  There is no wandering in a studio.  Once I get going on an indoor drawing I seem to be able to do it and even enjoy it, but initiating the behavior… that’s harder.

I decided it was time, though, to draw from a photo.  Looking for something that would motivate me to do so, I decided that I should draw from a photo that is not of something I can go out and see.  The idea of historic sketching must have come from my watching the new Timeless series, which is about time travel, but as I already have a lot of historic photos of Quebec City I thought that was where I should begin.  I chose a photo of a trolley, both because I like trolleys and because it was taken in the year that I was born.

I started by lightly drawing everything using a Platinum Carbon Pen, keeping the lines very light so I could cover my errors if needed.  This is what I ended up with: 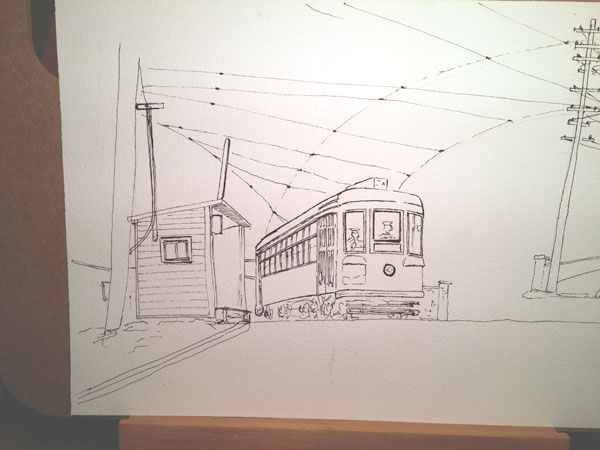 To bring a more solid nature to the drawing I started increasing the contrast, using a Platinum 3776 pen and a Platinum brush pen.  This got the drawing to this point: 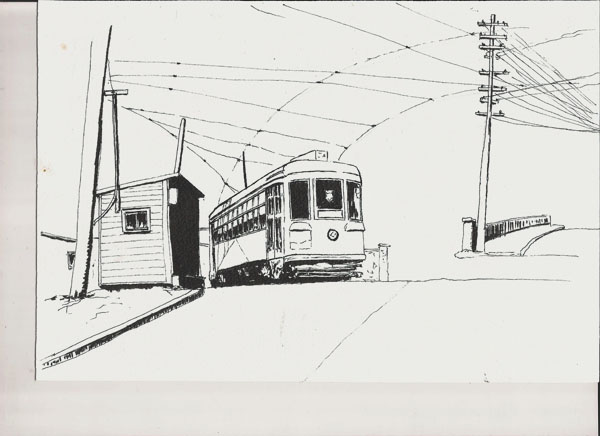 Then it was time for color and touch up.  I still struggle with watercolors but at least I’m starting to pay attention to it.  I was pretty happy with the results.  Hope you are as well.  I think I’ll be doing more historic sketching. 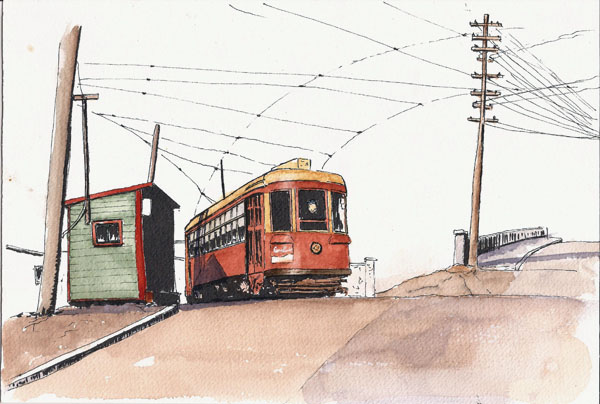 We are getting a reprieve from the relentless march into winter.  We’ve had a couple days where the temps have gotten up to 6-7C (low 40s for the metric-challenged).  It’s also been very windy but yesterday the winds dropped to a reasonable level and I just couldn’t pass up the possibility of doing some outdoor sketching. 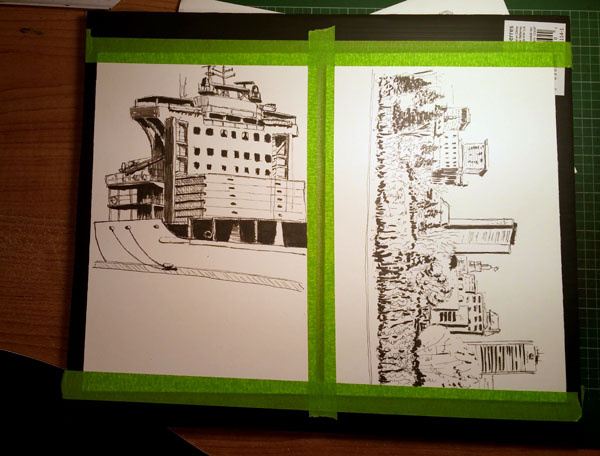 I decided to go armed with quick-draw (pun intended) materials so I took a couple of 10×14  Coroplast sheets, cut some 6×9 sheets of cheap multi-media paper, and I taped two sheets on each side of the coroplast.  These were shoved into my bag and out the door I went.  The idea was that I needed to do sketches quickly so I didn’t have to sit for a long period, which cause my old Arizona bones grow cold and I get grumpy. 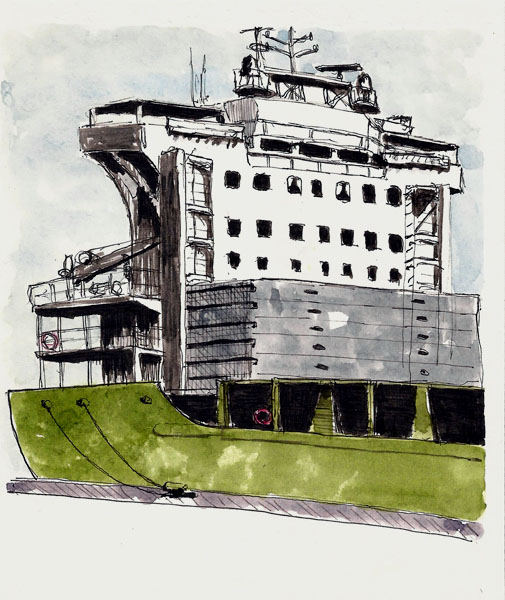 I managed to get a couple sketches done with considerable walking in between, each sketch taking only 15 minutes or so.  I applied the color at home.  Hope you like them.  For me it was a major victory and gives me some hope that I’ll be able to do some outdoor sketching using this method.  As it gets colder I can shift more and more towards Marc Taro Holmes’ “5to7 sketches” where you use 5-7 lines to do sketches very quickly.   Where there’s a will, there’s a way. 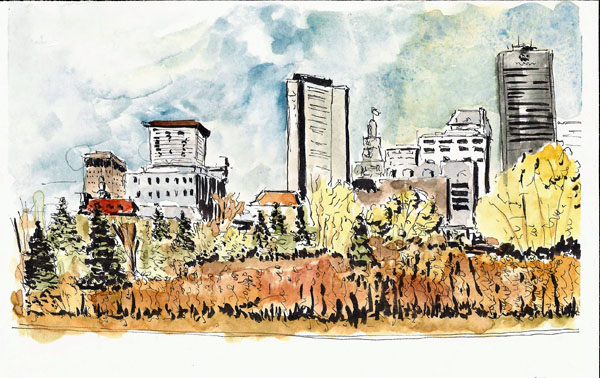 I mentioned that I’m trying to get myself drawing at home rather than on the street.  It sure is a struggle and I’ve definitely got to get a place set up to do it.  But I’m pretty good at the clear-the-deck arm sweep that will shove a bunch of stuff out of the way and provide me a place for some paper.

That’s what I did the morning I decided to draw a clump of foliage.  Notice that I’m not setting my sites too high.  I have to convince my brain that it should be drawing in the morning while I’m having my morning coffee and I don’t want to discourage it.  I did upgrade my paper, though.  This one was done on Fabriano Artistico CP, which may be a bit to rough for my fine fountain pens but we’ll see. 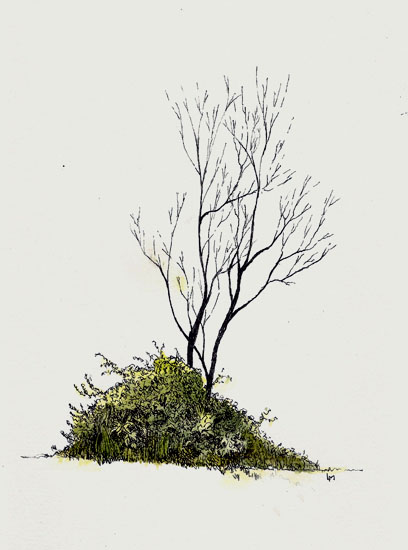 One thing is clear.  It’s a LOT easier to draw and paint in a studio with the paper resting on a flat surface.  Heck, it’s not even windy (grin).

We’re entering sketching winter in Quebec City.  This is when the notion of street sketching is absurd and so we’ve got to start looking for hard to find indoor locations to feed our urges to put pen to paper.

I got an email from Claudette telling me about permission she obtained for us to sketch a rock display in the lobby of one of the government buildings.  My initial reaction was “huh?” and an assumption that I didn’t understand the French (my default reaction to most things because it is generally true).  I love drawing rock cliffs and even piles of rocks but a geologic display of rocks?  Didn’t make sense.

I almost didn’t go but I’m glad I did as it was a lot more fun than I thought it would be.  Besides it was warm inside and raining outside.  During the morning session I drew three rocks, a green one, an almost clear one, and a yellow one.  I’d give you more details about these minerals but that’s all I know.  Geology is not my thing.  The results aren’t great art but they do represent a lot of fun and I’d love to have another shot at drawing some of these unique and complex shapes. 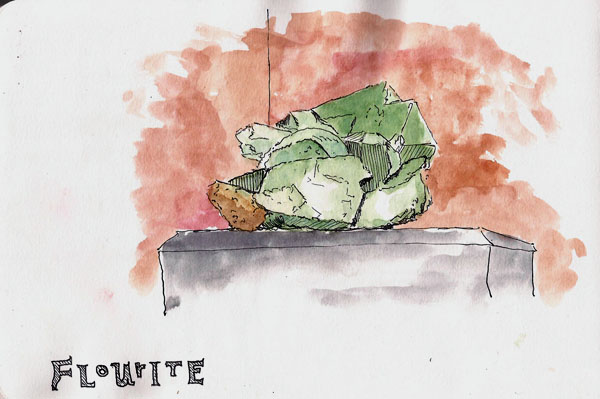 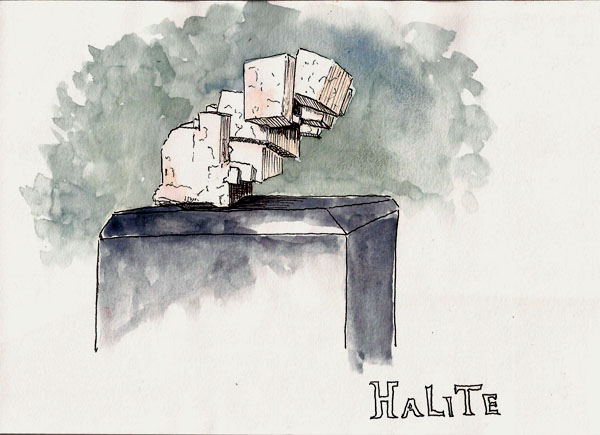 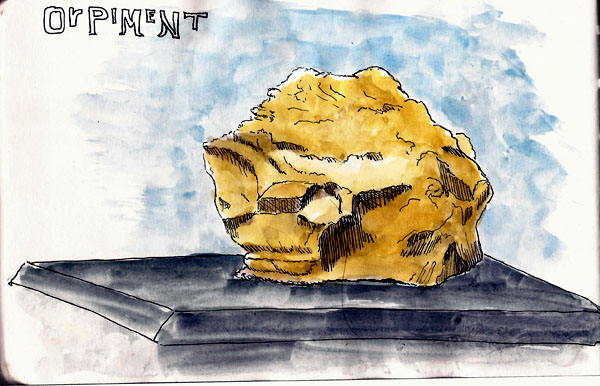