Last Thursday I had a meeting at Mount Herman Cemetery to plan an interaction between our sketching group and a haiku writing group.  We’re planning a somewhat unique urban sketching event where we sketchers will meet at the cemetery and be teamed up with one or more haikuistes (is that a word?) and they will glean their inspiration from what, where or how we’re sketching.  I think it’s going to be a lot of fun and we’ll get to meet some creative people.

I got to the cemetery a bit early, though and I passed the time drawing a cemetery scene, though I had to cut it short because I ran out of time.  This was where I ended up.  I wonder if it could inspire a haiku poem (grin). 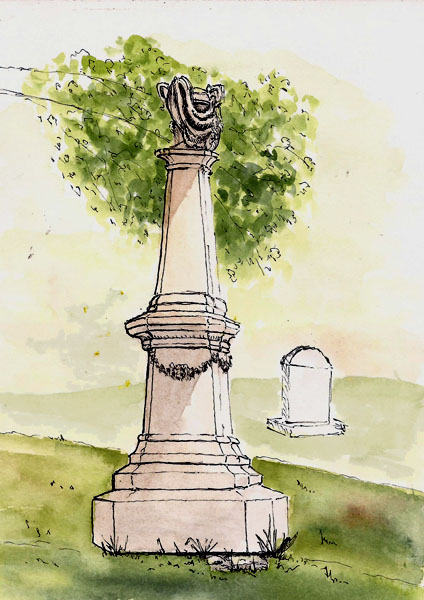 It got pretty windy when during our sketching session and because our temperatures are still cooler than normal, it got uncomfortable.  We all started looking for a place to draw while out of the wind and I chose the leeward end of Maison Dorion, a large house that is the headquarters for the St. Charles River Society.  I drew this scene. 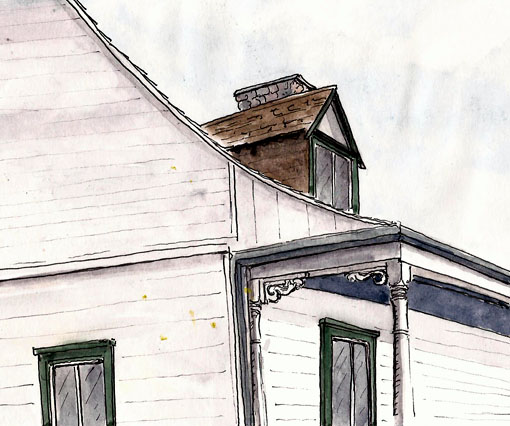 I’m convinced that I’m the slowest sketcher on the planet.  I’m not proud of being number one, but a man has to know who he is.  Sketching isn’t a race but nevertheless, this is often a problem for me because I’d like to capture a scene without growing a beard at the same time.

I figure that the only way to crack this problem is to force the issue so this morning, I went to a park near “my river,” sat down and started drawing trees as quickly as I could.  I did the pen work for this scene in about 25 minutes and reached for my color tools.

Oops…I’d forgotten my watercolor stuff.  What I did have was a handful of watercolor pencils and the smallest waterbrush known to man.  The pencils were ok for the color source but that waterbrush… yuck.  It was woefully inadequate for the task.  Nevertheless, I worked quickly and in less than 40 minutes I had this sketch. 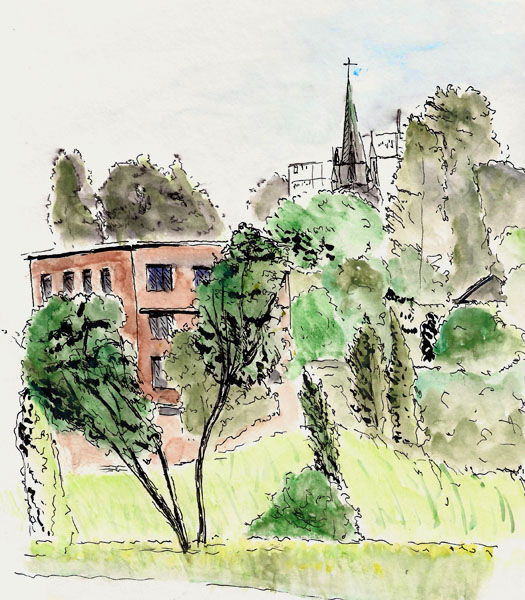 This doesn’t compare well to Liz Steel doing a painting  in the blink of an eye and it’s not even close to how long it takes me to do a one-minute sketch a’la Marc Taro Holmes, but for a scene with this many trees, I feel it was pretty quick.

I’m hoping to do a bunch of one-minute sketches and another bunch of continuous line drawings this summer.  They won’t be as detailed as my normal drawings and certainly not as accurate.  But I’m hoping these exercises will speed up my hand.  Wish me luck. 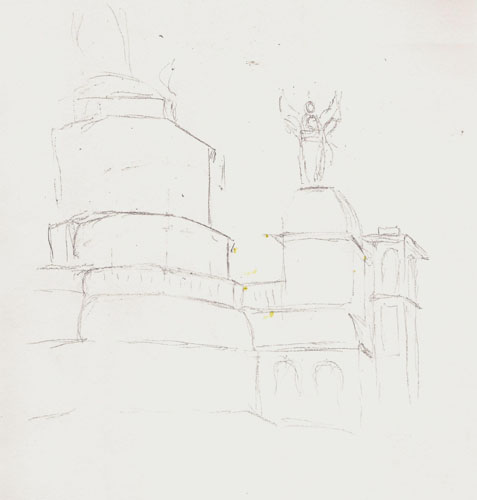 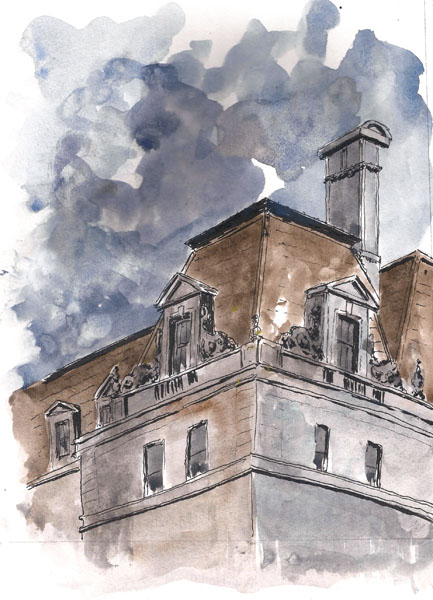 My daughter came home for Easter and she wanted to go to our downtown area and wander around, so that’s what we did.  We’d been walking for a while and decided to sit down and take a short break.  As we sat, taking in spring sunshine and watching tiny icebergs floating down the St. Lawrence River, I asked if it would be ok for me to do a quick sketch, no more than 10 minutes.

The only sketchbook I had with me was a 3×5 Stillman & Birn Epsilon book (love these).  My pointy device was a Platinum Plaisir.  I chose a scene and started quickly sketching a piece of the Chateau Frontenac.  It took me less than 10 minutes and I added some color when I got home.  No plans were interrupted and no need for “I’m too busy to sketch.”  If you carry a pen and a small notebook, you always have time to sketch.  Besides, now I get to say that I’ve gotten to do TWO outdoor sketches this spring (grin). 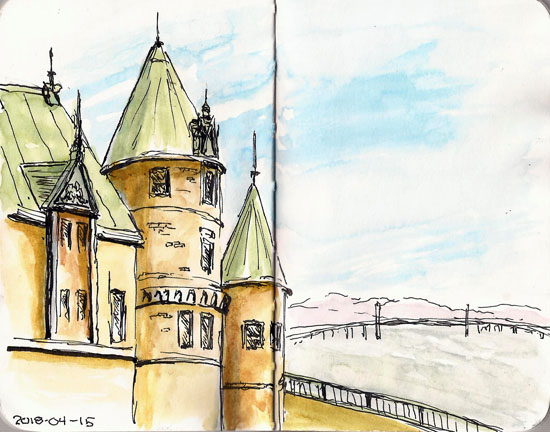