For the past couple years, my sketching tools of choice have been the Platinum 3776 and a Pilot/Namiki Falcon.  Both are excellent sketching pens but a bit on the pricey side.  I’m a pen nerd so such expense was “justified” simply cuz I wanted one but the reality is that one doesn’t have to spend a lot of money on a fountain pen to get good results.

Evidence for this comes in how many sing the praises of the Platinum Preppy that may not win any beauty contests but it only costs $4 and works really well.  I remember a time when everyone recommended a Lamy Safari to newcomers because it was the only game in town when it came to inexpensive pens but since then we’ve seen the release of the Pilot Metropolitan, TWSBI Eco, Platinum Plaisir among others.  Each of these is less expensive and at least the equal to the Safari so choices abound.

I want to talk about the Pilot Kakuno, specifically about the recent release of the completely transparent version, though it comes in a couple of colors as well.  There were two things that caused me to investigate this pen.   I love transparent pens because, as a street sketcher, it’s nice to be able to quickly check the amount of ink in a pen before I go out the door. 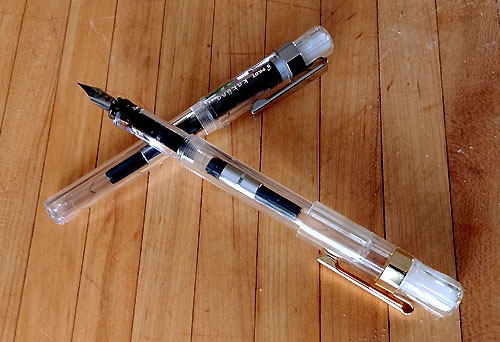 Mostly, however, this pen interested me because it was from Pilot and I love Pilot steel nibs.  They are smooth line makers, even when you use fine nibs like I do.  Second, they can typically provide lines that are very fine or a couple times that width with a little bit of pressure.   The low price point ($14) made it easy for me to scratch my curiosity itch and so I ordered a fine nib version of the pen. 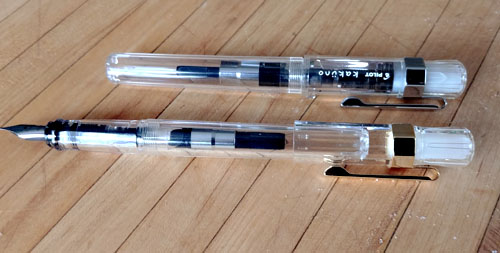 I loved it from the start.  This pen may be the lightest pen I’ve used and it fits my hand beautifully when posted.  Like all of the dozen or so Pilot pens I own, this one works flawlessly with the DeAtramentis or Platinum pigmented inks I feed my sketching pens.  I was a happy camper but I was about to get happier.

I decided to order a medium nib version because I had a medium nib Metropolitan that I enjoyed a lot for quick-sketching.  The reason is that the medium nibs provide width variation from a Micron 01 with light pressure to a Micron 03 with a bit of pressure.  In addition to that, if you flip the pen upside down you can get hairline lines from the same nib.  Since I’ve received this pen I’ve used almost nothing else. 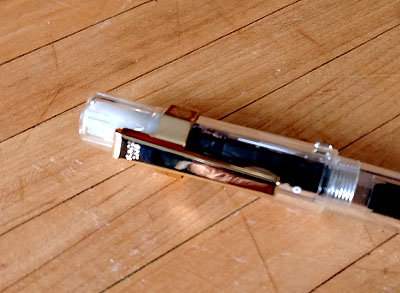 I got happier still when I solved the one problem I had with the Kakuno.  It has no clip and I need a clip on my pens.  Happiness came, however, when I discovered that the inexpensive clip sold by Kaweco for their pens fits beautifully on the Kakuno cap.  I immediately ordered a silver one for my fine nib pen and a gold one for my medium pen.  I now have a color-coded set of these pens and I’m thrilled. 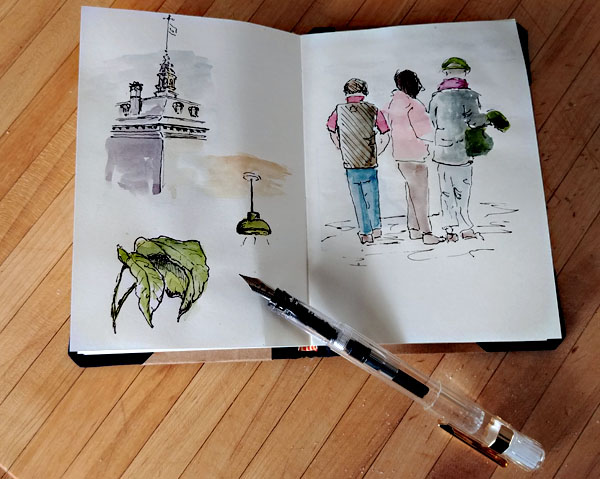