Qin Shi Huangdi, who proclaimed himself the first emperor of China, built one of the wonders of the world when he ordered the creation of a veritable army of clay soldiers, horses, armaments, and a whole lot of other stuff.  And since these treasures were excavated from his tomb, statues of them have been created and sold to those of us fascinated by these relics.  I own one such statue, albeit it’s a small one.

It’s been a while since I’ve drawn in my slower-than-molasses style and I was feeling the need for it.  I didn’t really take as much time as I probably should have but it was nice to sit, comfortably, and draw with some Miles Davis in the background.  This sort of thing reminds me of the compromises we street sketchers make by sitting on tripod stools while juggling our materials in our laps (grin).

I start this sort of drawing with a mechanical pencil.  I started by locating key parts of the figure, thinking only of lengths, angles and locations.  Once I’m convinced that I’ve got the pieces and their locations on paper, I move on to fountain pen for the real drawing.

Some say “never use pencil..just go for it.”  That’s fine, and I often do that myself.  But it’s really liberating to know that the parts and their locations are defined because I can concentrate on drawing the arm without having to think about its relation to the head.

There’s another reason I like this approach.  The pencil step I outlined above requires cognitive functions as elements are compared, sized, and located.  Once done, however, I can let go, relying upon my visual cortex (that I work desperately to train) feed my motor cortex with info that guides my hand.  No thought is necessary; I just do.

Once I did the basic drawing I made a decision not to hatch the shading but rather to use watercolor for the darks and colored pencil for the highlights.  I was pretty happy with that decision.  The Stillman & Birn Nova paper handled both well. 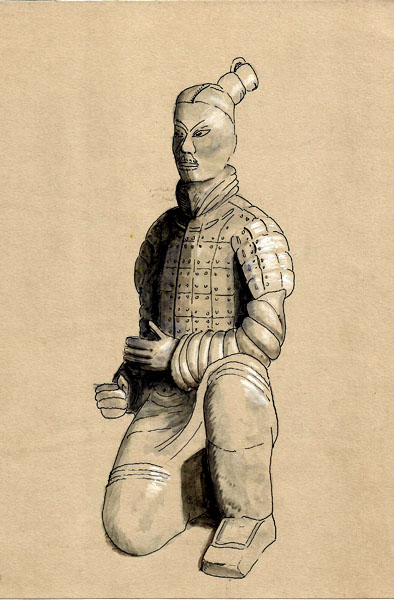 What’s your ideal sketching day?  I think mine is spending the day at Miriam’s cottage.  Miriam’s cottage is an idyllic place on a large island in the St. Lawrence River, near Quebec City.  She’s got a wonderful artist’s cottage, a huge barn full of sketchable stuff, and a chunk of land you could get lost in as long as you didn’t run out of paper.  All of that would be great enough but there’s also Miriam, who is an inspiration.

She approaches art the way we all did as kids.  She’s very much a “let’s try this” and “just have fun” kind of gal.  Her house has one wall with animal heads looking down on the proceedings.  These are not just any old animals either.  There’s a unicorn among them and all are made from paper mache.  In her loft there’s an full size man done using similar materials.  She draws with abandon and with considerable skill, choosing her tools on a whim.  It’s hard not to be humbled and harder still not to be thrilled just to be there.  Her dog Nikki is a joy and he loves to sit at a sketcher’s feet, apparently enjoying our silence, or maybe the scratching of a pen on paper.

Yvan and I went out to visit her a few days ago.  It was a rainy day but we were able to find cover and did some drawing.  The first drawing I did was this one. 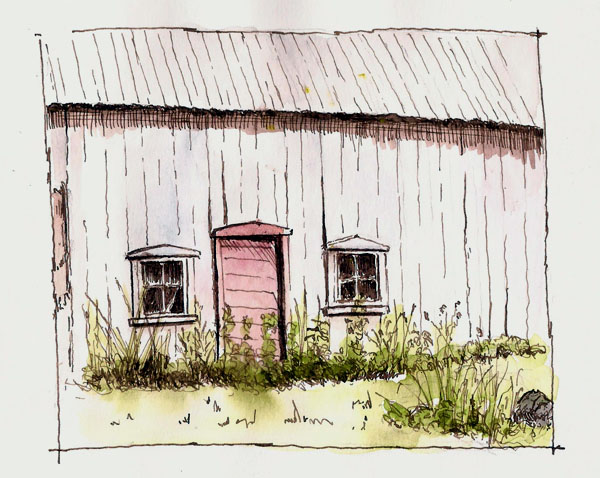 Yvan was drawing next to me and I grumbled about how hard it was to draw this simple scene because nothing on this old barn was in alignment as it should be.  He took that as an opportunity to give me an art lesson and we had a great conversation about lines, squinting, and my problems with both things.  It was perfect. 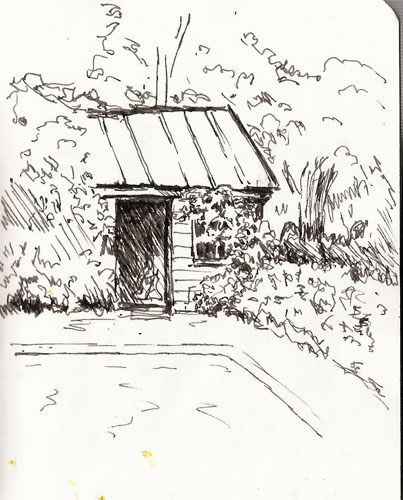 I got out my little S&B Epsilon (3.5×5.5) book and drew this small sketch of the pool shed, trying to keep what Yvan had talked about in mind.  Then it was time for lunch so we headed to the deck, put up an umbrella over a table and ourselves and then spent an hour or so eating and enjoying each other’s company.  Miriam’s sister, Sarah, joined us.

The rain stopped and we decided that we should walk a bit so we headed down the hill, down the road and ended up at low tide next to the St. Lawrence.  In this location, huge rocks are exposed at low tide and we got the bright idea to try to do a drawing, in spite of the fact that it was threatening more rain.

I only had my little sketchbook with me and a Pilot 78G but that was enough.  I sat down behind where Miriam was sketching and drew her and the surrounding rocks.  I had no color with me but it didn’t much matter because I had to rush the last few lines because the rain had started to fall again.  I added the color when I got home.

We climbed the hill back to Miriam’s place and all agreed that we were going to have to do this again…and maybe again.  It was, indeed, an ideal sketching day. 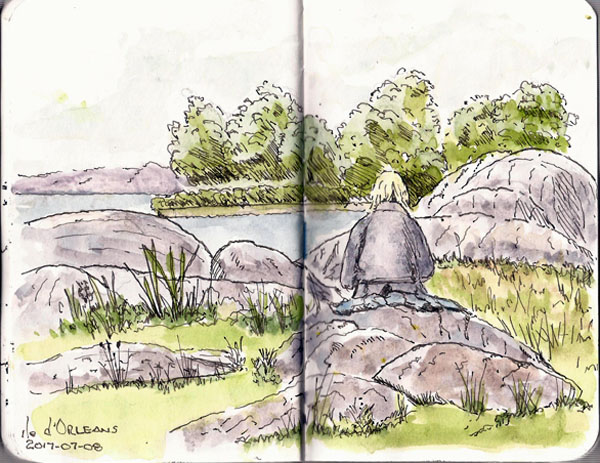 A large producer of bicycles and bike gear is Garneau, Inc. and they are based in Quebec.  They have a factory and store just outside of town and associated with it Garneau has a small bicycle museum.  On display are really early vintage bicycles and tricycles, some made entirely from wood, but also some Schwinn bikes I had as a kid.  I guess that makes them ‘early vintage’ too.

Our group went there yesterday and we had a great time.  There were six of us, which was just about right for this small single-room museum.   Guylaine sat down to draw a Schwinn Stingray bicycle.  It’s classic banana seat and high-rise handlebars brought back lots of great memories.  I decided that rather than drawing a bicycle alone, it would be fun to draw Guylaine drawing the bicycle.  Here is my attempt at that. 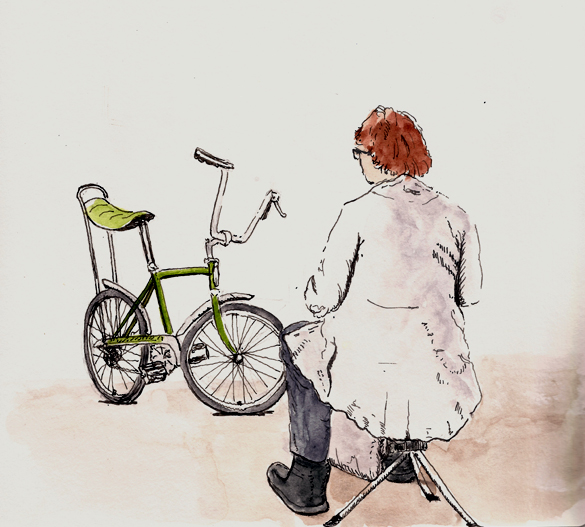 I find wooden bicycles to be quite marvelous.  The museum had quite a number of them, but I decided to draw this very large (front wheel is 29″dia) tricycle.  The amazing thing is that aside from the wheel bearings, rear axle, and pedal crank, the only metal in the bike is a y-shaped yoke that connects the body frame of the bike to the fork/handlebars.

Since it was all wood, I thought it fitting to draw it with brown ink so I used a Pilot 78G with DeAtramentis Document Brown ink for this sketch. 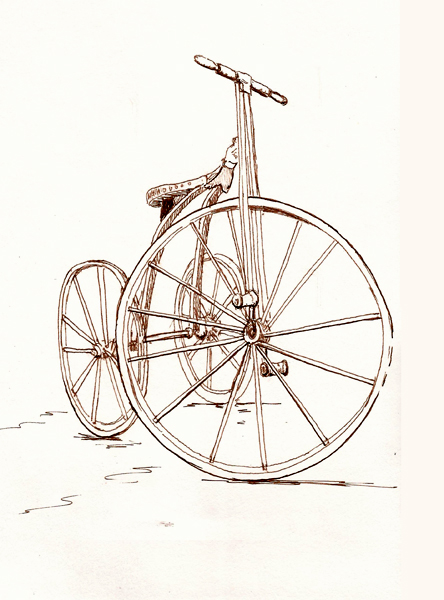 I’m not a fan of sketching “challenges” because, to me, this turns my hobby into a job and I’ve had enough of those in my life.  But when Liz Steel and Marc Taro Holmes proposed that people draw 100 people in 5 days, I just couldn’t refuse.  If you want to see the people sketches  from other people, just give the hashtag in the title to Mr Google. 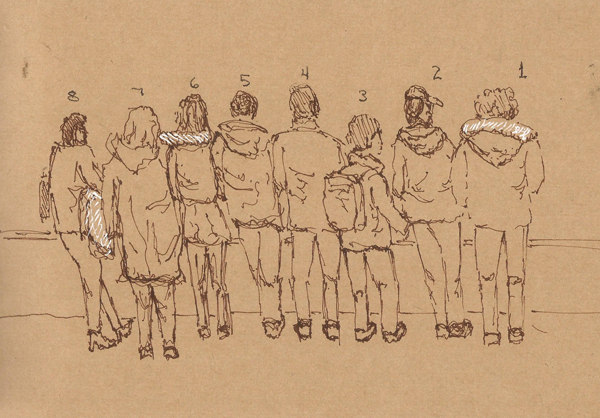 I knew that to draw 100 people in a week I’d have to concentrate on quick-sketching them.  I also knew that I had a problem because I’d already committed to a sketching session on Tuesday that would have me spend the day away from people so I had to accomplish this task in four days rather than five. 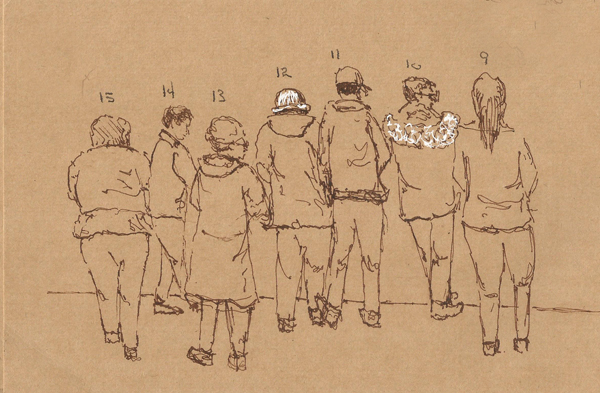 I headed to the mall this morning with the idea that maybe I could get more than the daily requirement of 20 people done.  I found a seat in front of a stand-alone coffee vendor.  Because they have no seats, their customers ask for coffee, it’s handed to them, and they leave.  Occasionally a line will develop but I was there between coffee break and lunch, I guess, because it was mostly one person at a time and they were there less than a minute.  It was like being in a shooting gallery but with a pen in my hand. 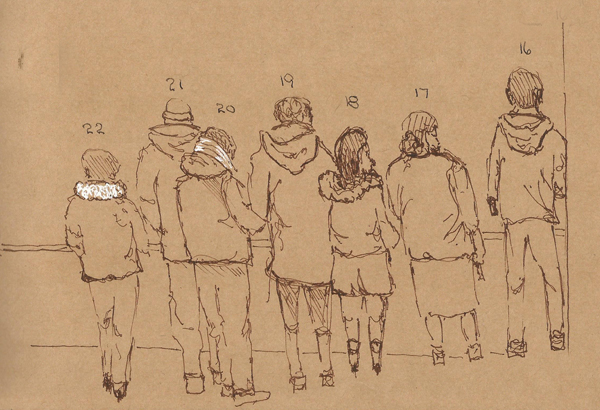 One thing surprised me.  I got an audience, which was a bit disconcerting because they wanted to talk to me and I was trying to keep up with the people showing up for coffee.  It was a unique challenge but they were easy to please as audiences always are. 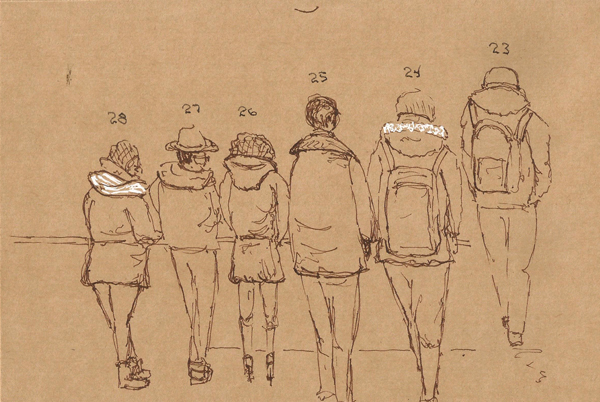 One thing was clear.  The intimidating number of 100 was not as formidable as I’d thought before I started.  I was producing one of these people every couple minutes in spite of conversations with my audience and the occasional lull in coffee traffic. 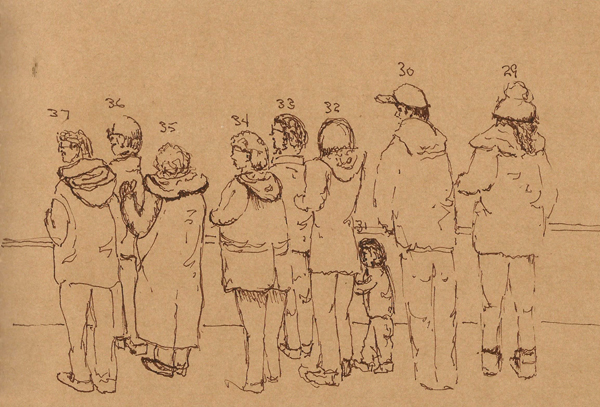 When I got to 37 it was time for a break so I bought a coffee and spent some time showing people what I was doing and answering the typical questions.  I was happy with the head start I’d gotten on the week, but if I wasn’t going to be able to sketch tomorrow, I was already behind (grin).  Heck, let’s face it.  This is kinda nuts.

As I was leaving I walked by the food court and I couldn’t pass it up.  Just 3 more so I could have enough for today and tomorrow.  I sat down and started drawing people who were ordering poutine, a disgusting concoction of fries with salty gravy and cheese curds.  I filled the page before I finally packed up and went home.

This evening I was watching TV news and started drawing the talking heads.  This added another 6 to the head count (pun intended) so I’ve drawn 50 people so far.  More to come.  How are you doing with your 100 people challenge?

It’s turned bitter cold again, killing hopes of a mild winter.  And at -33F I headed off this morning to meet Claudette at the library.  Somehow the walk was longer than normal.  I wonder why. 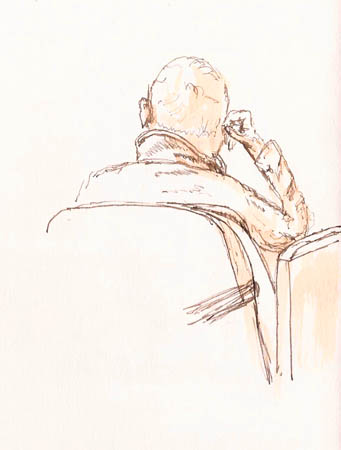 But we had a lot of fun sketching people at the library.  Library people tend to stay put a bit longer than museum people so there’s a better chance of finishing a sketch before they wander off.  I’m not much of a people sketcher but I thought I’d share a couple of the sketches I did this morning.  It’s ok to laugh… honest.  I wonder if the sleeping kid would have been embarrassed to know that he was snoring and that people were looking at him. 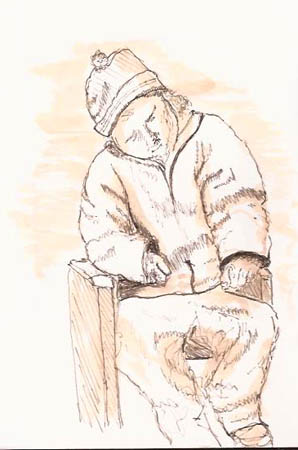