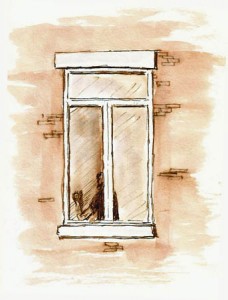 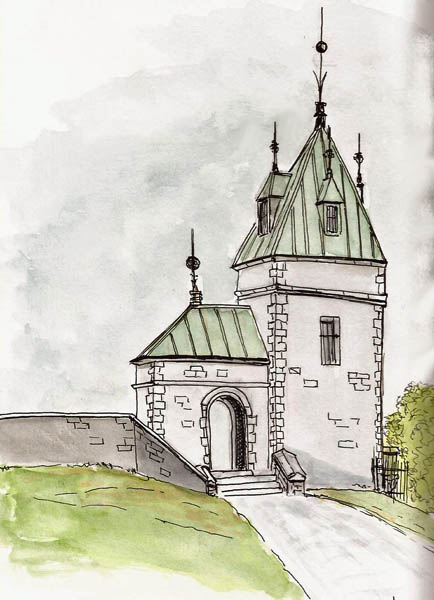 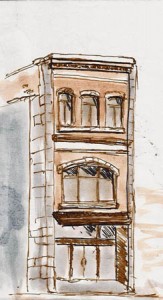 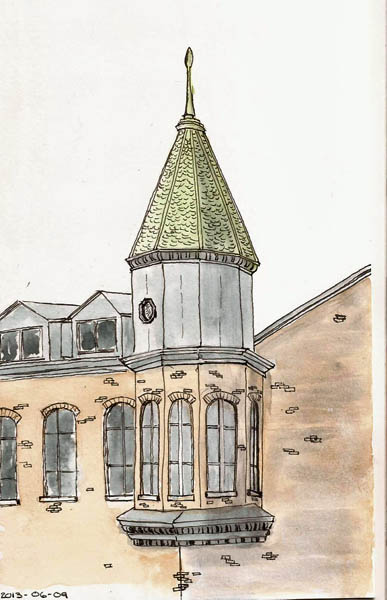 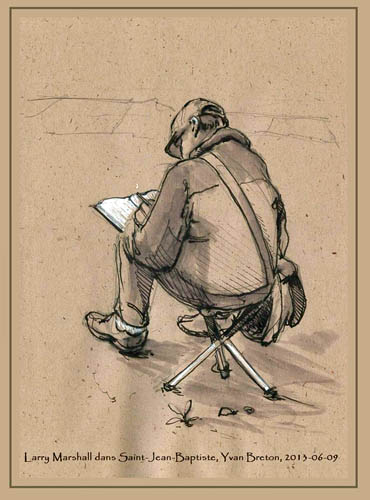 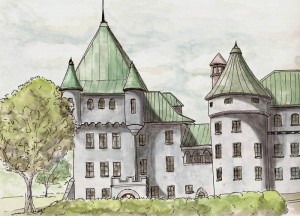 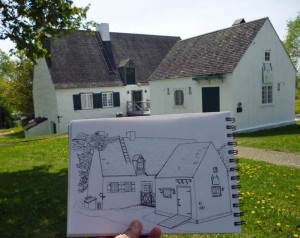 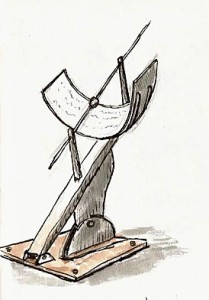 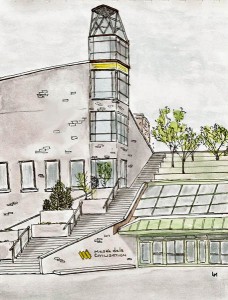 I feel like one of the guys in Samuel Beckett’s play Waiting for Godot.  Every day they show up to meet with Godot.  Every day he doesn’t come.  He never does.  I’m beginning to think spring in Quebec is like Godot as while it’s officially been spring for a month, we’ve yet to see anything resembling spring.

I thought I’d share a few sketches I’ve done while waiting for a decent sketching day.  First, here are the last two sketches I did of the Nigeria exhibit at the Musee de la Civilisation.  Both were done in a Stillman & Birn Epsilon (5.5×8.5) sketchbook. 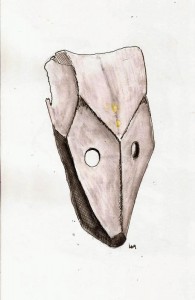 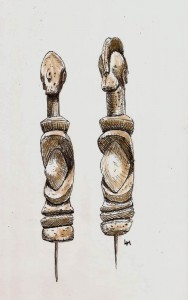 Lexington Gray in Noodler’s Creaper. Waterbrush with a few drops of Noodler’s Polar Brown in it.

This next sketch was my attempt to defy the elements.  I went out one morning because it was all the way up to 4C and it wasn’t windy.  As I sketched it got windy.  Then it started raining lightly.  I was driven from the street by hail and thought I was going to freeze to death (grin).  Done in a Stillman & Birn Zeta (5.5×8.5) sketchbook with a TWSBI mini filled with Noodler’s Lexington Gray. 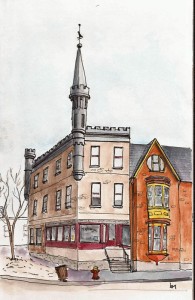 Lastly, I took my new Wahl-Eversharp Symphony 913 pen for a test drive.  This is an old 14k gold flex nib pen and while it’s old technology, the nib is wonderful.  I was playing with ‘quick-sketching’ some buildings.  That term is relative and as I’m a slow sketcher, what I mean by this is that I only spent about 20 minutes doing this sketch on S&B Epsilon paper.  Watercolors applied in my typical, inept fashion.  I’ve got to devote some time to learning watercolors. 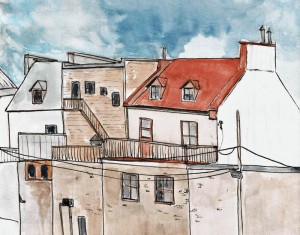 I started French classes last week and it sucked the life, or at least the time out of my sketching week.  So I hit the four-day weekend called Easter with wild abandon, sketchbook in hand. 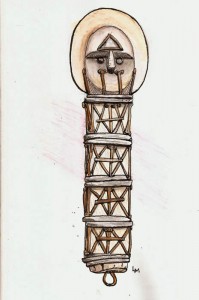 I’ve already reported on my Friday adventure with Yvan and Claudette but on Saturday I met Yvan at the museum and we sketched and talked about sketching.  Yvan has incredible patience and I have an endless stream of questions.

Then we headed downtown to see Terry Bouton, sitting in her window again.  This time she was doing quick oil paintings, on mylar, while people posed for her. 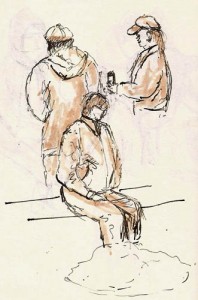 From there we went to the library and did some quick-sketching of people sitting outside, while we sat in comfy chairs looking out at them.  Life is sweet. 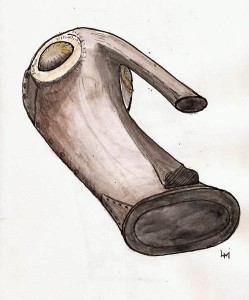 Sunday was a repeat performance.  Yvan and I had a great time sketching at the museum but as it was supposed to be warm in the afternoon, I had my eye on the door.

By the time we left, though, I was hungry…very hungry and I don’t think about much besides food when I’m hungry 🙂

We wandered around the old port area, assessing the situation there.  The ice is gone from the St. Lawrence but the personal boat harbor is still iced over.  We successfully added to our list of ‘gotta sketch…’ subjects.  By the time we got to the Farmer’s Market we decided we had to sketch something and, jointly, chose to sketch of one of the hotels (it has great tower in the middle of it) and the convent that’s behind it.

It was only as we were setting up that I realized that I didn’t have a large sketchbook besides my museum book.  I could have sketched in that but it’s only got a couple more pages left in it and I’d decided it would end up woth 100% museum sketches.  So, with my S&B Alpha (4×6), I decided to do a ‘baby sketch’ of the tower alone. 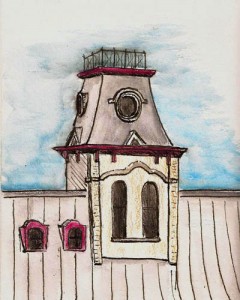 Then we headed down to see Terry again as Sunday was sculpture day.  People were posing while she sculpted clay masks of their likeness.  Pretty cool.

With Starbucks next door, I decided that I needed a scone and cup of coffee.  Yvan obliged and followed me in.  He sat at a window counter and started sketching people who were walking by and standing at the intersection.  Two hours later and whole lot of ‘how do you …’ and ‘that’s amazing…’ from me, and explanations from him and it was time to head home.  Can it get better than this?

I think I’ll save my Monday exploits for the next post as this one has gotten rather long.  [Sigh]… tomorrow it’s back to French class.

A late snow storm and associated cold weather has kept us off the streets and in the museums.  I met with my buddies Yvan and Claudette on Wednesday and we headed into the Nigeria exhibit at the Musee de la Civilisation.  Claudette and Yvan set up to sketch different masks and I wandered, and wandered.  For some reason I wasn’t in the mood to do a single object. 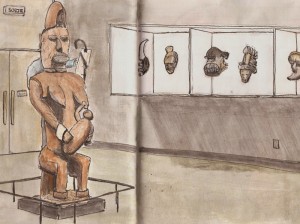 Then it occurred to me; I hadn’t sketched any of the museum interior.  I looked around and chose this view, because I hadn’t yet sketched the large statue and because Yvan was somewhat visible behind it.  I thought the background of display cabinets in the darkened room would balance the large statue nicely.  It was done in a Stillman & Birn Epsilon (5.5×8.5) with a Noodler’s Creaper flex pen and Lexington Gray ink.  I did the color with watercolor pencils but, when I got home, I went over most of it with a gray wash to highlight the display cabinets and to reflect the dark exhibit room. 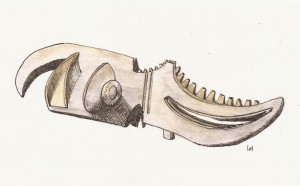 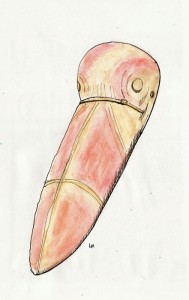 Today Yvan and I went back and I did these two objects.  Same S&B sketchbook, same tools.   Hope you like them.