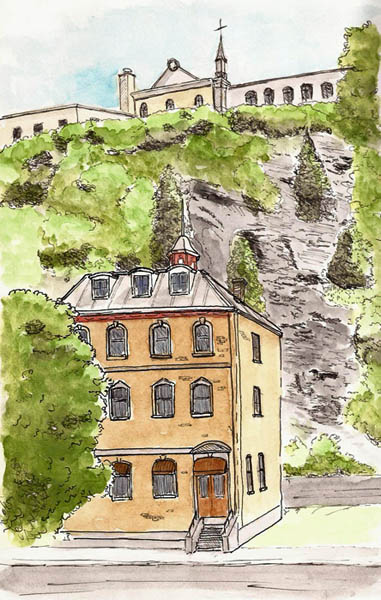 If you wander around the internet, spending time in places where people talk about ballpoint, gel, and rollerball pens, you’ll find discussion of “hybrid inks.”  These inks are stuffed into new versions of ballpoint pens in an attempt to cause ballpoints to write as smoothly as gel pens.  One of the pens that is often discussed is the Pilot Acroball, which comes with either medium or fine points. 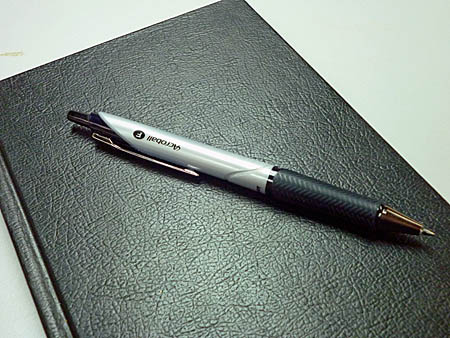 I should confess that I have a fountain pen fetish and because of that, I’m mostly ignorant of things ballpoint.  I’ve been impressed by Uniball rollerball pens for years but I don’t really use them.  I use fountain pens for all my writing and sketching needs.  But many sketchers are reluctant to use fountain pens, seeing them as fussy, foreign devices.  They use needlepoint pens like the Sakura Micron, which are fine, archival-quality pens but their problem is that if you do a lot of sketching, you buy a LOT of them as they run out of ink or dry up all too quickly.

So, when I came across the Pilot Acroball in the mall the other day I bought one.  I bought the fine point, in black, as this would be the best form for sketching – at least my kind of sketching.  Frankly, I bought it with the notion of finding what was wrong with it as I’d never seen any sketcher talk about using one.

So what is it?  At first blush, the Pilot Acroball is like any of the gazillion plastic throw away pens that are filling our landfills and creating floating plastic islands in the Atlantic.  We really need to start thinking about the effects created by seven billion people, each doing some little, inconsequential thing like buying disposable pens.  But this post is about the Acroball, not how we’re going to live if we continue to ignore the realities of our world.  In fact, when you look closely you find that this isn’t, or doesn’t have to be, a disposable pen in spite of its $2-3 street price as you can buy refills for it.

The pen is a ‘click pen’ – the tip being retractable.  It’s comfortable in my hand and the esthetics are appealing.  I’m not going to dwell on this stuff, though, as these are personal preference things.  I’m writing this post to talk about hybrid ink and how the pen draws lines for sketching. 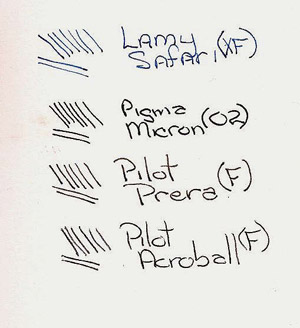 Pilot’s hybrid ink causes this pen to lay down a very fine line VERY smoothly.  For its size, it’s less scratchy than most of the needlepoint pens; it acts more like a fountain pen filled with a lubricating ink.  I’ve tested it on Clairefontaine paper, Strathmore 400 series drawing paper, and in my Stillman & Birn Alpha sketching journal.  It performed better than I thought it would in all cases.  So what’s wrong with it?

According to Pilot, this ink is both archival (pH neutral) and lightfast.  I’d love to test their claim of lightfastness but this time of year we don’t have enough sunshine to do that effectively so I’ll take their word for it.  But I can report that it is waterproof, which for those of us who like to add watercolor to our ink sketches, this is important.   It’s at least as waterproof as my favorite sketching ink, Noodler’s Lexington Gray.  It just didn’t budge, no matter how hard I scrubbed with a waterbrush.  The ink is actually a dark gray, very similar to Noodler’s Lexington Gray.  The Pilot Prera fountain pen used for the comparison graphic was filled with Lex Gray.

The one thing I noticed is that the Pilot Acroball has the same demand of its users than all other pens reliant on a rolling ball to deposit ink; you have to press down harder than I’m used to as a fountain pen user.  Flexible fountain pen nibs disappeared from the scene when ballpoints came along because people, used to pressing hard with their ballpoints, were bending fountain pen nibs left and right.  This difference shouldn’t bother those who aren’t used to fountain pens but I found it a a slight problem for me.  As I haven’t done anything but doodles with the pen I dashed off this quick sketch of the closest thing at hand.  So, what’s wrong with it?  It’s not a fountain pen (grin).  But I’m going to start carrying it as a back up pen for sketching. 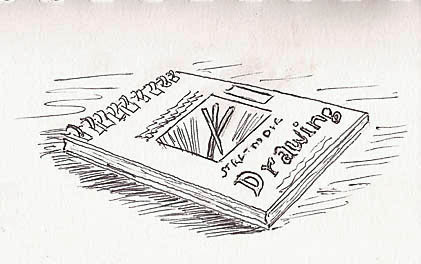