This is a hard time of year for me.  Not only do I not like winter, as a street sketcher my daily routine is snatched from my by the cold.  My Arizona fingers just won’t hold onto a pen when it’s cold.  I know, I’m a sissy, but I’ll point out that the birds leave because they can.

But all is not lost.  Last year I lived in the museums, sketching Samurai helmets, Nigerian masks, statues, and paintings.  This year I have decided that I will spend more time in coffee shops, drawing people, tables, and countertops AND heading to the museums.  One of the big exhibits at our Musee de la Civilisation, this year, is Paris on Stage, that reflects Paris as it was at the beginning of the 19th Century, with emphasis on the world expositions that took place there in 1889 and 1900.

And this is where I was, with a couple of friends, for a pleasant Saturday morning of sketching.  We’ve done it for two weeks, now and I think it will become a regular thing for us as we’re having lots of fun, sketching, followed up by a pleasant cup of tea and the ever-present discussions of art materials. 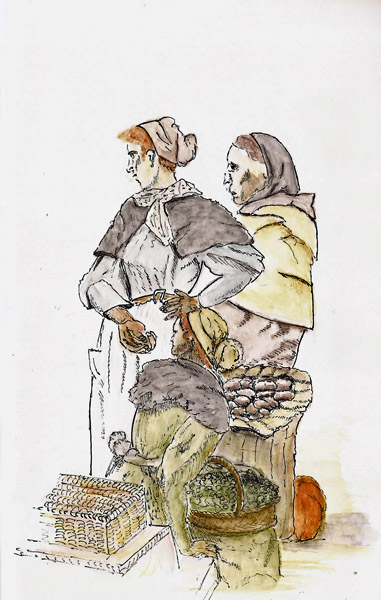 There’s a huge mural called Les Halles by Léon Lhermitte.  It hangs at the entrance of the multi-room exhibit.  It’s an amazing work that captures the outdoor marketplace in Paris at that time.  One could sketch portions of it forever and not become bored.

My skills, thought, are too limited to do it justice but here is my attempt at three of the women in the painting.  Lots of fun to do and, for me, very difficult.  I’ll be sketching more of this mural as I hibernate in the museum this winter as it was lots of fun.

I find watercolor pencils and a waterbrush to be a great way of coloring sketches while in the museum.  I use Albrect-Durer pencils as I love the way the lines completely dissolve, unlike other pencils I’ve tried.  I do use watercolors in the museum sometimes, though.  This museum is very accommodating to sketcher-persons (grin). 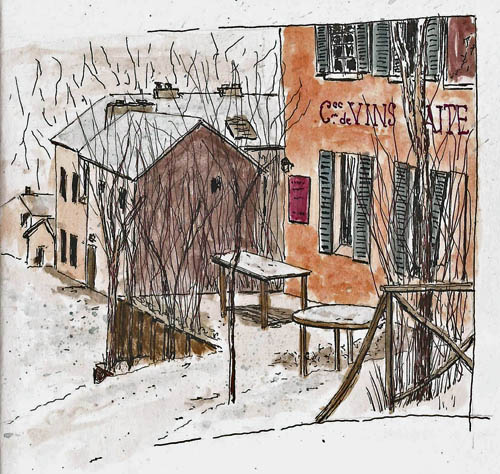 This week I had decided I would fill two pages with ‘cabaret’ sketches.  There is a significant portion of the exhibit devoted to the ‘hot’ cabaret scene in 19th Century Paris, with posters, paintings, signs and photographs of the places (eg – Moulin Rouge, Chat Noir) as well as early videos of dancers, patrons, and even the prostitutes who were part of that scene.  I began with this sketch of a painting featuring Le Lapin Agile, a cabaret owned by a prostitute who rose in the ranks of the community.  I  loved the winter scene particularly the many trees, devoid of leaves as they hunkered down, much like I’m doing right now, against the cold.  This sketch is about 6×6. 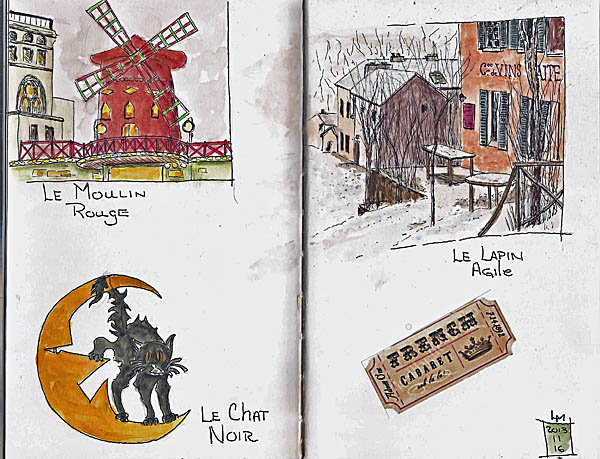 My eye caught a large brass sign hanging high above me.  It was the original sign that hung to announce Le Chat Noir, possibly second only to the Moulin Rouge for notoriety in Paris.  I quickly sketched it and then followed it up with a loose rendition of a portion of a Moulin Rouge poster that was, itself a pencil sketch of the place.   Then it was time for tea so we packed up and headed to Cafe 47, the museum coffee shop.  It was a great day.