Being cloistered by winter isn’t great for a street sketcher but if you live in Quebec City, it’s a given for several months of the year.  There are museums and coffee shops but even so, there’s a lot of sketching time going down the drain if I don’t do some drawing at home.

This year I’m looking around for things to do that will improve my street sketching.  My mentor has been after me to spend time drawing from my imagination for a long time and for just as long a time, I’ve ignored the idea because I like drawing on location.

But, he says, drawing from imagination improves your visual memory in a number of ways.  It improves your visual memory.  It also requires that you engage your brain as you go through life to capture visual information that can be used when you’re constructing a drawing from memory.  It also allows you to draw more, because you don’t need a subject.

Even street sketchers need visual memory.  It’s a misnomer to talk of hand-eye coordination except for the ability to look at a piece of paper and have the ability to guide the pointy device to describe a circle or straight line.  When we actually draw objects however, the process looks more like

and it’s the brain, and short-term visual memory that is involved in the filtering and translation of what the eye is recording and what you end up putting on paper.  The better your visual memory, the better that translation will be and the more time you can spend drawing vs looking at your subject.

Training the brain to record

Most people go through life not seeing most of what they are seeing.  The eye records everything in front of it.  The brain only keeps what it thinks you need.  A robin needs to identify worms, or parts of worms sticking out of the ground and it does so far better than you can.  We biologists call this ‘search image’ but in reality, it’s what the brain has been trained to see.  I never even noticed fire hydrants until Pete Scully drew them.  Now I always notice them.

Brains are flexible and can be trained.  From the view of a biologist, most of art training is brain training.  If your brain is going to build a visual vocabulary for you, it must be given a reason to actively record, for use later, stuff you see as you walk and sketch your way through life.  Most of us don’t do that.  We draw what we see and move on.  Drawing from imagination gives your brain the required motivation to turn on its recorder when you look at stuff.

Lest you doubt its applicability to location sketching, think about the architect.  When an architect goes to draw a building, they have a huge pile of visual stuff stored up in their brain from studying building shapes and their construction and design.  Clearly that helps them do building sketches more quickly and accurately.  Ask Liz Steel or Frank Ching if that’s true.

So, if you spend time drawing from memory, you will be frustrated by the fact that you don’t know what this or that looks like but you’ll also start getting your brain to build a visual vocabulary that you can use.  Because you’re a sketcher, these memory images/symbols will be more sophisticated than a ball on a stick for a tree, but they will have the same use that a child has for their symbols when you sit down with a blank piece of paper and nothing to look at.  And with a fully stocked visual vocabulary, your ability to work on location will improve as well.

Anyways, given that I’m stuck inside for the next few months, I’m going to work on my visual memory and I’m starting to build my visual vocabulary while I’m wearing half a dozen layers and out for a walk.

I’m really new at it but I’m finding it fun.  I’m doing a bunch of really quick, vague scenes that don’t amount to much but I just start drawing and adding stuff that pops out of my brain.  I’m also drawing more “little things” that exist in my world that, by themselves, aren’t really a drawing but the quick-sketch helps me capture the shape as I tell my brain “I want to use this in a sketch some day.”  None of this is great drawing as I’m suffering that ‘frustration’ thing I mentioned, not really knowing how to draw most of the things I want to add but can’t.  But here’s  a 2×4 sketch that started with a tree and I just started adding stuff to it.

Yesterday I was playing with some watercolor paper and decided to draw a scene that I saw in a newspaper a few days ago.  I doubt that it is close to the photo but I remembered a woman looking across a river at a house.  This one is 5×7.  Maybe winter won’t be so bad after all. 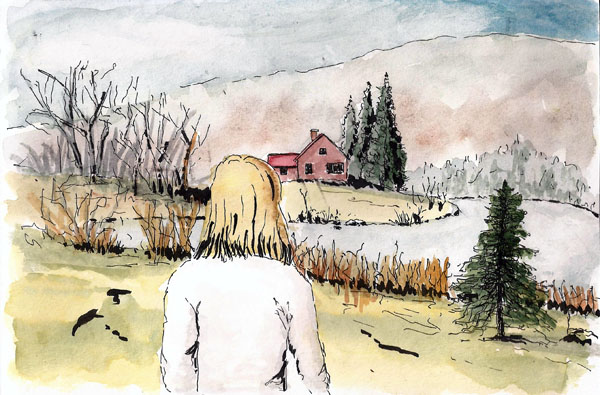