Marais du nord is one of my favorite places in the Quebec City area.  It’s only a few kilometers out of town but when you go there, you leave the hectic, noisy city behind and enter the world of chittering squirrels, bird noises and, most of all, the silence and peace that comes from being close to nature.

Marais du nord (north marsh) is situated within and around a large expanse of marshland between Lac Delage and Lac St. Charles and is maintained by a consortium of concerned citizens who decided that too much of the land around the lakes was being bought up and developed.  They took on the Herculean effort of convincing the government to give them money and developed the “park” (I’m not sure whether park or reserve is the better word) to maintain the marshland and to provide hiking trails, bridges, overlooks and benches for people wanting to get away from the city for a while.  A lot of Quebec kids are getting to see nature up close because of Marais du nord.

Chantal and I headed there for the day, mostly to clear our heads with a bit of hiking, lunch in the woods, and maybe, just maybe, to find some mushrooms to sketch.  She has a “mushroom book” in which she sketches mushrooms and the mushroom diversity at Marais du nord is extraordinary.

It was a glorious day, though it was cut a bit short by threatening clouds that dumped a few tons of water on us as we sat in the car.  Sometimes things do work out and we guessed right this time.  Nevertheless, we got some hiking done and found some of those mushrooms. 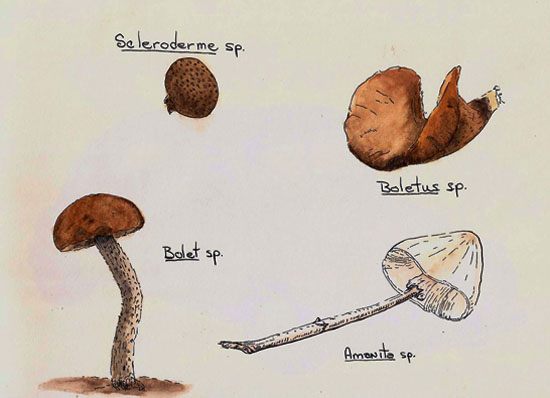 Because this was a hiking trip, the notion that I would spend a couple hours doing a landscape was out of the question.  Chantal is patient but there are limits.  There were mushrooms to find, afterall.  I saw this lack of time as an opportunity to force myself to put into practice some of the stuff that Marc Taro Holmes is trying to teach those of us taking his Craftsy Travel Sketching in Mixed Media course.

I’ve been doing a bunch of quick, single-line sketches, trying to capture a scene quickly and simplifying by elimination of details.  My typical sketching style makes it hard for me to capture a chunk of nature quickly; nature is just too darn complex.  So I decided to see if I could grab a scene quickly.  I didn’t use the single-line approach but worked VERY loose and quick, for me, and in 10-12 minutes I’d done this drawing.  This was nothing short of a miracle for me as I can burn an hour drawing a single tree.  The bridge would have taken another hour.  I did several of these quick sketches during the day and I was generally pleased with the results.  Maybe Marc’s right and that by the time I’ve finished up a few dozen of those single-line sketches I’ll have figured it out. 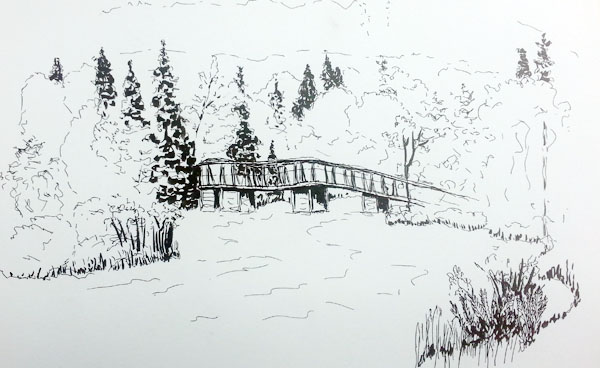