A couple days ago I promised a review of the Hero 9296, a fountain pen I’ve purchased recently.  I bought it for two reasons.  First, my buddy Yvan started using one to do his quick sketches and while Yvan’s favorite pen is always the one he just acquired, he’s stuck with this one for a while.  The second reason is more important for anyone reading this – it’s CHEAP!   I bought it via eBay for $7.00, including the shipping. 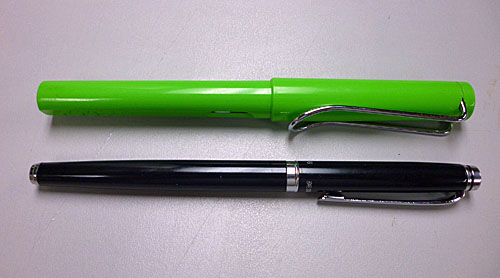 Hero 9296 next to the ubiquitous Lamy Safari

I’d like to say that this pen has bumped my Pilot Preras and TWSBI Minis into the closet but that’s not the case.  I present it here for two reasons.  Did I mention that it’s CHEAP?  For the price of a couple lattes you can have a fine-writing (pun-intended) fountain pen.  The second reason is that this pen is a very thin, but normal length fountain pen, favored by those with smaller hands.  It has a metal body and silver trim.  If you like thin pens, this one is worth a look. 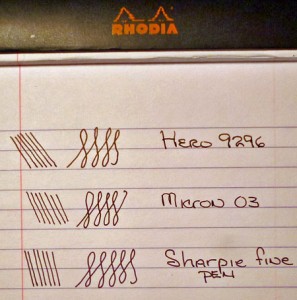 I bought what Hero calls an “extra-fine” nib and I was surprised to find that though it’s an Asian company, the nib is more like a typical Asian “fine” nib.  This is not a knock against it, but the Pilot Penmanship XF produces a finer line.  This pen, at least with Noodler’s Lexington Gray is very similar to a Micron 03 in line width.  It writes wetter than my Pilot Preras and so Lex Gray looks darker from this pen than from my Preras.  I think most would find it quite respectable and usable for most sketching.  My Pilot Preras produce a bit finer line than this pen but I think most of that is due to the wetter line from the the Hero 9296. 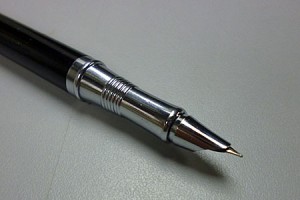 There are a couple things I don’t like about this pen but they may not bother others.  First is the nib/grip.  It is very shiny and, if you’re an outside sketcher like I am, this can be a problem on a sunny day.  The fact that the pen is hooded combines with the shine to create a pen where it’s hard to tell if/when the nib is oriented properly.  Anyone who has used a fountain pen knows that rotating the nib of the pen can greatly affect how or even if it will write.  Maybe you get used to it. 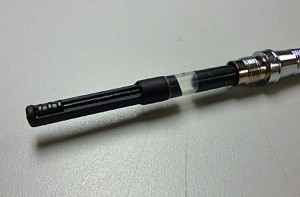 The pen comes with a converter, which is normally a plus.  In this case the converter is different from more typical Hero converters in that it is 1) thinner, providing less capacity and 2) rather than a threaded plunger, it has a slide plunger that I find clumsy to operate.  I’m not sure why but the result is that you can’t get the converter more than 1/2 – 3/4 full, further reducing how much ink the pen holds.

These drawbacks aside, this is a good pen for not much money.  I’m going to fill mine with a washable ink (my pens are typically filled with waterproof inks) to give me another tool in the arsenal. 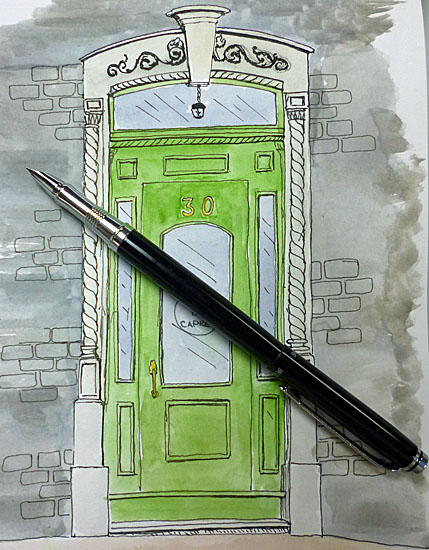