You can always tell a newbie sketcher.  We’re the ones playing 20 questions.  What pencil do you use?  What is the best brush for small watercolors?  What’s a good starting palette  for watercolors?  Lucky for us, artists are a friendly bunch.  They tolerate all these questions and patiently provide answers like “it depends,” which, of course, it does.

But no subject gets more discussion than do sketchbooks.  Will it open flat?  Will it handle washes?  Is the paper smooth or rough?  Will the binding hold up to being strapped to my boot?  Ok…I made that last one up but it’s only a slight exaggeration.

As a newbie I’m overwhelmed by the sketchbook question.  Initially I didn’t want one at all.  I figured that drawing on single sheets of paper would be better because I could throw all my screw ups in the garbage.  I still do that too much but several artists have said, “Hang on to your mistakes.  You’ll enjoy looking back to see your improvement.”  I’m still waiting for the improvement gene to kick in but their advice is sound.

Thus far, all my sketches have been very small.  3″ x 5″ is the largest I’ve done and most have been ATC size (2 1/2″ x 3.5″).  But I decided that I wanted to draw a bit larger so the hunt was on again.  The obvious choice would be the larger Moleskine watercolor book but the crazy landscape format really shows its downside when you flip open the big version and are faced with a 17″ wide book, with the part you’re working on representing half or less of the total weight of the book.  And so my search continued.

To quote U-2, I think I’ve found what I’ve been looking for.  I bought a Fabriano Venezia sketchbook and a Stillman & Birn Alpha series sketchbook.  I thought I’d provide a few impressions of these two sketchbooks, sort of a newbie view.  The summary first:  both are fine sketchbooks for someone like me who likes to do ink/watercolor sketches.

Not much to say here.  They’re basically the same size, the S&B slightly smaller as the dimensions in the table suggest.  The pictures tell the tale.  Surprisingly, this small difference ‘felt’ like it mattered to me as the S&B sketchbook just feels better in my hand.  I thought this might be due to a weight difference so I weighed them.  The S&B is lighter at 436 grams, compared to the FV at 455 grams but with only 19 grams difference (less than an ounce for you Imperialists) that seems unlikely.  I guess it’s true; there’s no accounting for taste. 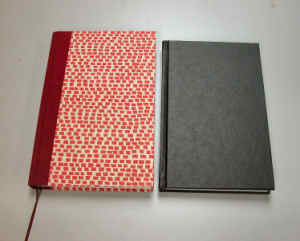 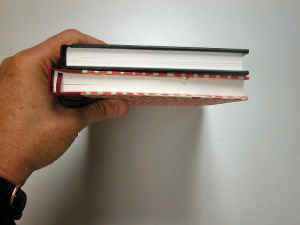 There are significantly more pages in the Fabriano sketchbook.   Personal preference here but I prefer the thinner profile of the Stillman & Brin sketchbook so I’m willing to give up a few pages to get it.

Here’s where I grumble.  I grumble about the US unwillingness to accept international standards.  I grumble about paper graders and how these numbers become so muddled.  I’ll stick to this second thing.  How can art paper be heavier when using “lb” scaling and lighter when using “gsm” scaling?  It either is or it isn’t heavier.  Anyways, the Stillman & Birn Alpha paper is either heavier or lighter than the Fabriano sketchbook paper.  If one puts a micrometer on the paper, the Fabriano paper is slightly thicker.

The Stillman & Birn Alpha paper is bright white, while the Fabriano Venezia paper is cream-colored.  S&B do produce this same sketchbook with cream-colored paper.  It’s call their Gamma series.

I don’t like the cover of the Fabriano Venezia.  It’s high-quality and I like the cloth end plate.  But the red blotchs… ugly.  The cover of the S&B books are much nicer, though one could say less flashy.

Neither of these sketchbooks open as flat as a Moleskine but the S&B does pretty well.  I think it would be difficult to draw across the gutter in the Fabriano book whereas it would much easier in the Stillman & Birn book

The Fabriano Venezia book comes with a bookmark ribbon, while the Stillman & Birn does not.  I can’t be without one of these in my writing notebooks.  I’m less certain about their necessity in a sketchbook.

It’s always hard to know what to say about pricing.  It’s fine to cite retail price but the reality is that ‘street price’ is often quite different from retail price.  What I can tell you is that I paid several dollars less for my Stillman & Birn Alpha than I did for my Fabriano Venezia.  I don’t see price, however, to be a deciding parameter when buying a sketchbook except that I’ve learned that people with fountain pen fetishes like me shouldn’t buy cheap paper.  In my opinion, nobody should.

I haven’t done a lot of sketching in either of these sketchbooks, though I have done one sketch in my Stillman & Birn book.  What I did do was break the first page curse with some tests.  It’s actually the second page, I guess but I wanted to save the first page for a table of contents once I fill the book. 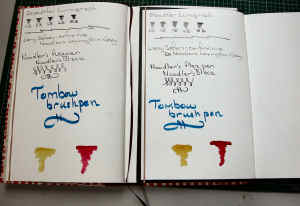 I tried to keep my pencil stroke and pressure consistent across both notebooks but I’m not sure I was able to do so.  It may be that the Fabriano book has a bit more tooth to it than the Stillman and Birn Alpha book.  Both take pencil well and both are smooth enough not to bother any pointed instruments.

I chose a couple popular fountain pens (Lamy & Noodler’s Flex) and Noodler’s waterproof inks as those inks are what I use.  In hindsight I should have included a washable ink but I didn’t think of it at the time.

I’ve been playing with Tombow pens. These are juicy water-soluble pens and I thought if anything would bleed through, these would.  Both sketchbooks take the colors well and there was no bleed-through in either sketchbook.  The same was true for the watercolor blotches, which I applied fairly wet as a heavy wash.

There is some shading with both sketchbook which might be a problem if you scan your drawings for posting in forums.  I need to experiment with real sketches to see whether this is a real problem or not.

It’s probably premature to draw conclusions that will stick.  Both of these sketchbooks perform well.  They do what they were designed to do.   But I did decide to use the Stillman & Brin Alpha while the Fabriano Venezia is sitting in a drawer.  I just like the Stillman & Brin better.  Here’s the first sketch I did in my new Sketchbook. 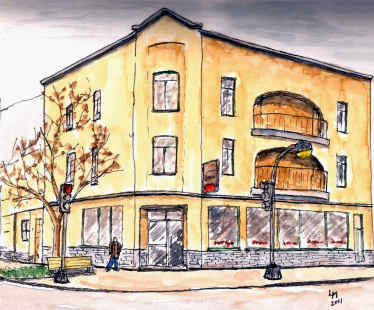