I’ve long thought that I should do a series of sketches of Quebec City doors.  We have many stately, carved or otherwise detailed doors and a set of detailed sketches of them would be nice.  This is one of those doors, though this was done rather quickly as I leaned against a wall on a windy day.  It is the entrance to the Tetu estate home, an 1800s home in the old city. 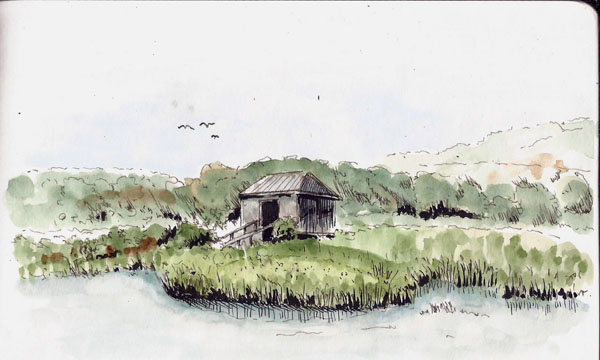 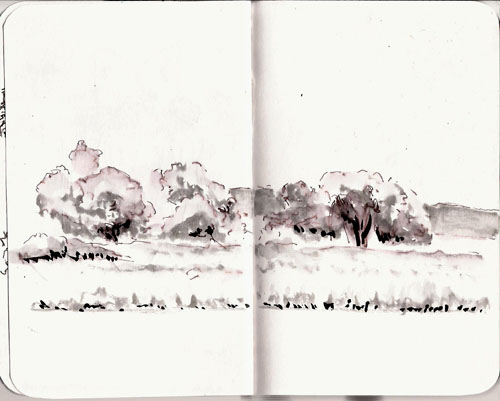 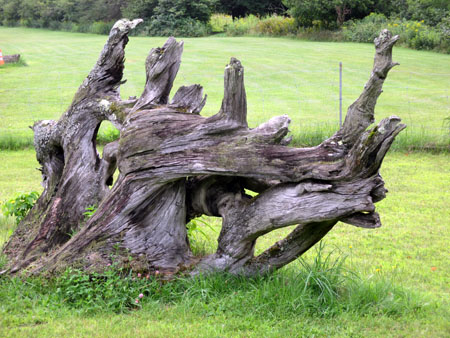 My friend, Hubert Langevin, is on vacation but he took the time to send me this photo.  He knows I don’t sketch from photos but he thought I might make an exception in the case of this big, beautiful stump.  I suspect that he might also have been smiling with the thought of me trying to draw it (grin).

It did seem to be a worthy challenge so I dove in with pointy device flying and more confidence than was reasonable.  It’s a subject where you could easily get lost so I started very slowly, placing marks at major intersections.  Speed picked up as the overall shape was established and I started drawing the internal shapes. More than once I thought of the Cathy Johnson mantra – “they’re only shapes” as I tried to ‘see’ how everything fit together.  Once it was drawn I switched to a brush pen (Kuretake #13) to lay in some of the darks.

It was a really fun drawing to do and it was nice to sit at a desk, with no wind, no tripod stool, and the ability to have good light on both photo (actually my computer monitor) and sketchbook.

Thanks, Hubert.  This was lots of fun. 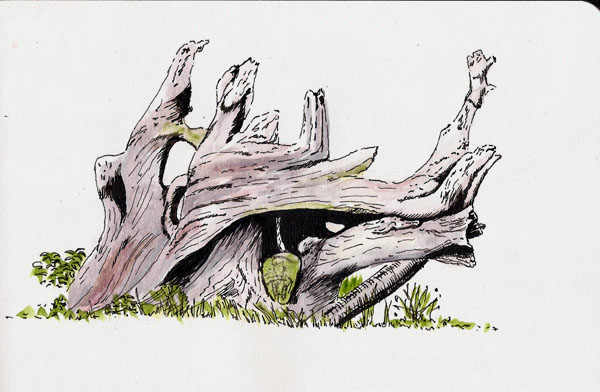 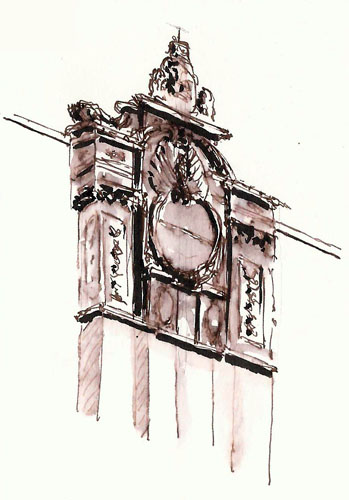 The third day of Karen’s visit started with me getting to the rendevous point a few minutes early so I sat down, grabbed my Pilot Metropolitan and started doing a quick sketch of one of the decorative facades that sit between the more major towers of the Parliament building.  I wanted to see if I could capture such a complex thing quickly, sort of “Liz Steel” style.

I was pretty happy with the results until I tried to put some watercolor on it and realized that I’d forgotten that I’d filled the Metro with J. Herbin Cacao de Bresil, a washable ink.  A bit of smearing ensued but I switched to a waterbrush and finished up with clean water.  I was still pretty happy with it given that I’d spent less than 10 minutes on it.

When Karen showed up we headed towards the ferry landing, though we took a route so she could see some other parts of the old city as we went.  The ferry ride was a joy, as always.  I love being on the water, even for only the brief minutes for this trip.

We decided to sit in the new park area associated with the south shore landing.  This is a wonderful place for sketchers as they’ve got large, comfy chairs pointed at the north shore.  We took two of them and got to work.  I gotta tell you a story first, though.  We’d been discussing a difficulty that Karen and I have about ‘zooming’ into our subjects.  Karen lamented that no matter what she did she always over-did this and ended up with things going off the page.  I have this problem to a lesser degree but more along the lines of the size of my scene being limited by the zooming.

I mention this because I was determined to “push things back” and I did so by including some foreground in the scene.  Unfortunately, this “pushed” the north side of the river so far back that I had a hard problem getting fine enough lines to depict all the building shapes.  I’m presenting my sketch without any color so you can see what I mean.  I improved this at home by thickening the foreground lines and using very pale color on the main subject but even so, I’ve got to go back and try it again. 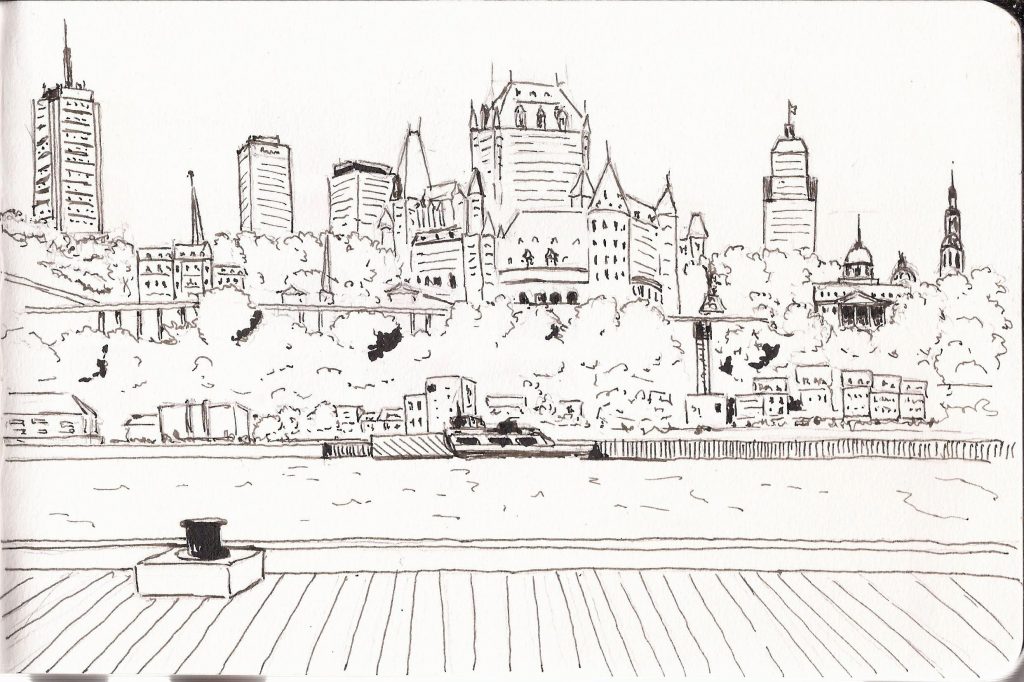 True to the discussion, Karen had the problem she mentioned but by selectively moving stuff around, she ended up with a sketch that I thought was pretty good.  It may not be geographically correct but it presents Quebec City and all its parts in a whimsical way that I liked.  Karen didn’t like it so much, though, and decided that she wanted to try again.  We both decided that it was time for lunch, which became at least an hour of talking color. 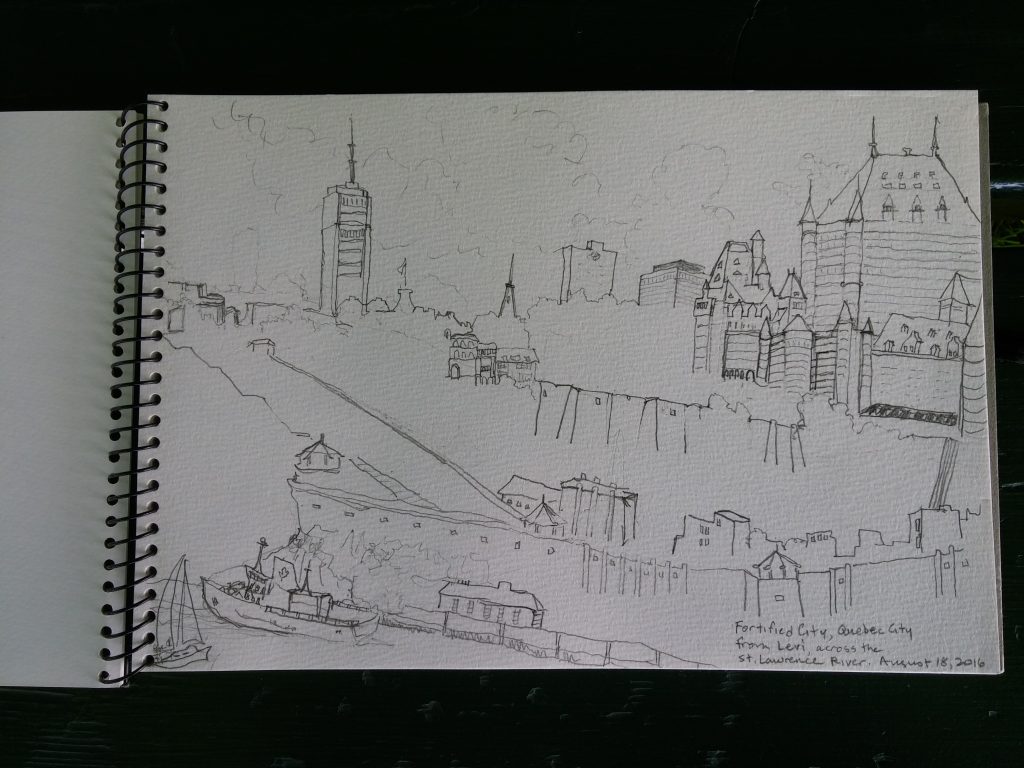 Karen’s second attempt at the skyline was done just as outlines of the levels in the scene.  The results were awesome in my opinion.  I stood and watched as Karen chose colors for the various parts of this sketch and it just seemed magical to my ‘reflect reality’ brain and she’s convinced me that I need to play with color more.  I’m mostly a line guy who sees color as an afterthought.  My bad. 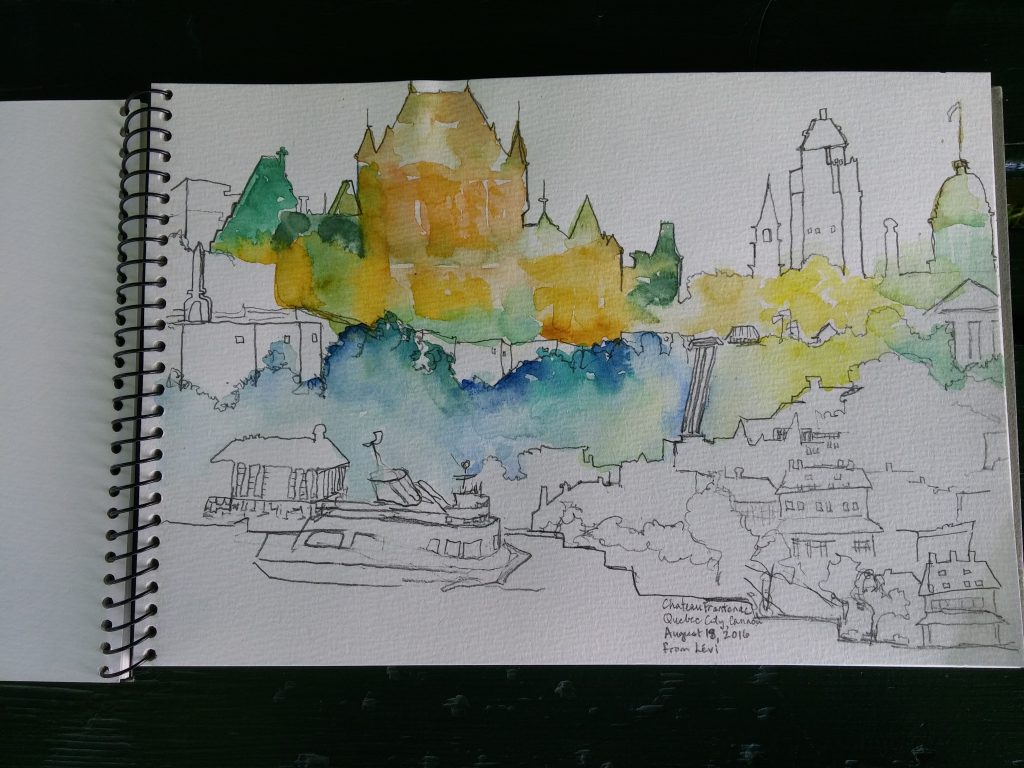 While Karen was doing her second sketch, I decided to draw a house that’s high on the hill overlooking the park we were in.  I’ve drawn the house before but this new park provided a much better viewing angle. 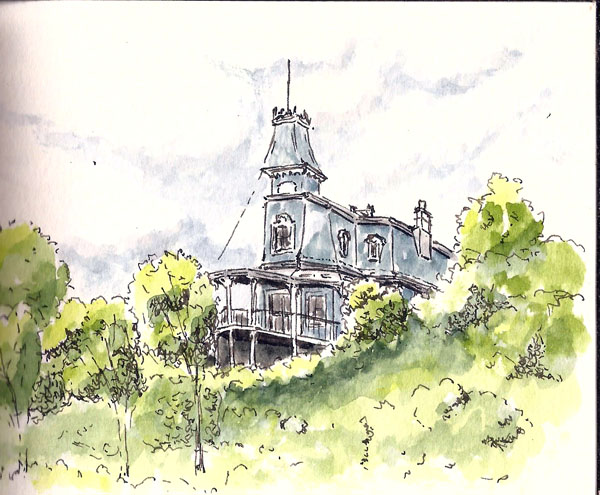 When we finished up we were both worn out.  We grabbed the ferry back to Quebec.  We were walking in the old city when we came across a guy who was sketching.  We stopped to talk with him and invited him to meet us the next morning for Karen’s last sketching session in Quebec City.  He said he might come and we continued on towards her hotel.  At Parliament we split up and I headed home.  Day four… coming up.

When Gabi Campanario ‘invented’ Urban Sketchers I envision that he simply realized that people would like to do sketching on location just like he does for the Seattle Times.  His book, The Art of Urban Sketching reflects this emphasis.  So does his manifesto, which doesn’t say anything about subject matter.  All the emphasis is on being true to your subject (reportage) and sharing your sketches.  USK was/is sheer genius in that respect.

But it has become so much more.  The regional group aspect of USK has brought people together on a local level and turned sketching into a social event as well as an art endeavor.  The regional groups also serve as rally points that have grown USK beyond Gabi’s wildest dreams I imagine.

As someone isolated on planet Quebec, however, the big deal of USK is the member list.  For the miserly sum of FREE, a member can get their name and contact info listed on a member list that is divided by location.  Thus, when someone is visiting a particular area they can find fellow urban sketchers and contact them.  All of this is to introduce a 3 1/2 day adventure with Karen Casper, sketcher extraordinaire from Burlington, Vermont.

Karen came to Quebec City as part of a sketching vacation and with USK and a bit of internet magic, we arranged to meet Wednesday morning in a park next to her hotel.  She’s a PhD anthropologist, expert watercolorist and avid sketcher and we hit it off right away.

After chatting a bit, we decided that the best thing for the first morning was to spend some time playing tourist, making a tour of the old city so she could decide what attracted her the most as a sketcher.  We did just that, though in the end I think she decided that everything interested her as a sketcher.  But we had a plan for upcoming sketching days that would make the best use of her time here.

As we were walking back from the old city towards her hotel, though, we decided to sketch one of the corners of the Parliament building. 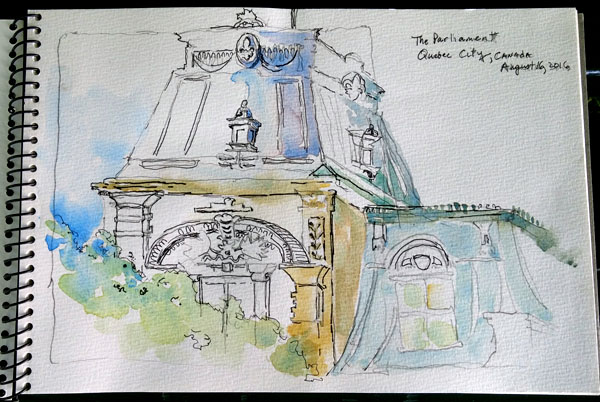 I love Karen’s use of color. We talked about that a lot because she knows stuff and I don’t. This sketch is about 6×9 but I forgot to ask what sketchbook she was using. Pen was a Platinum Carbon Pen. 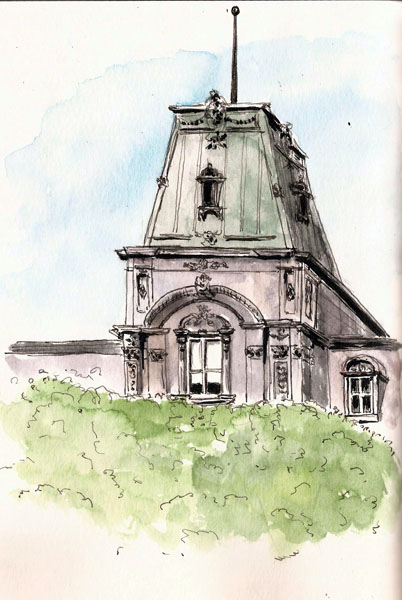 It had been a long day when I left Karen this day but I was so revved up that I didn’t get much sleep.  All I could think of was the full day of sketching ahead.  On to day two —>