I’m embarrassed that I’ve gone so long without a blog post, not much sketching, not much of anything.  I’m beginning to see the proverbial light at the end of the tunnel, though.  My leg is no longer the size of a telephone pole and my knee bends again.  More important, while I’m not completely pain free, the pain is not constant so I can begin to think about other things.

I’m still lacking in energy but I went sketching for the first time last week.  It wasn’t a successful trip by most measures but it was nice to see the gang and the trip made me feel as though I was on the mend.  We went to the civilisation museum where their main exhibition right now is from France and presents the works of cartoonist, Herge, a Belge cartoonist best known for his Tin Tin character.

I got on the bus and headed to the museum. The trip, one I used to walk in 40 minutes, seemed more like a crossing the Alps adventure than a simple trip across town.  By the time I got there I was exhausted but also excited to see everyone.

Some wanted to draw character images glued to the side of the building.  We could see some of them from a large window and people set up to draw.  Honestly, it seemed sort of silly to draw these simple characters but the truth was, they fit my energy level and ability to engage with a subject very well.  I spent about 15 minutes drawing these. 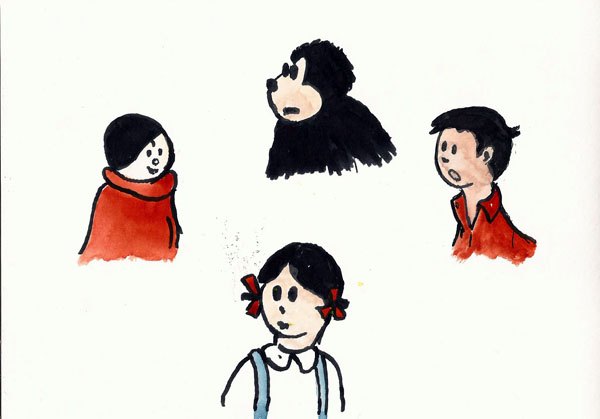 This quite literally wore me out and I spent the rest of the session sitting around, talking and looking at a bit of the Herge exhibition.

This week I found myself better able to walk and with even less pain.  I’ve started doing some doodling at home and even managed to get some winterizing stuff done on the weekend.  Still lacking energy but even that had improved.  On Wednesday I hopped a bus to the library where we were going to draw from comics.  Seems there’s a theme developing here. 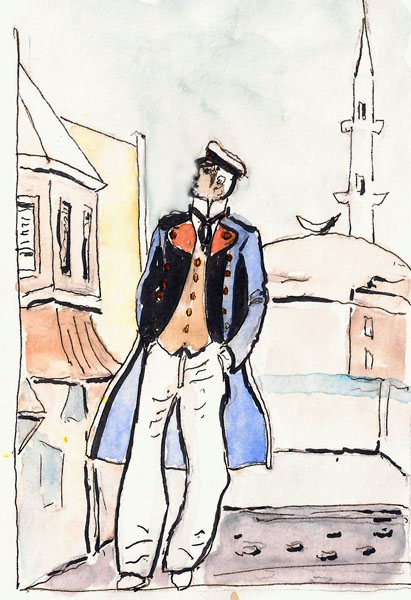 It was a wonderful session, though my lack of energy, and probably my hiatus from drawing, showed when I tried to draw some of my favorite cartoon characters.  I began drawing Corto, a very famous Hugo Pratt character.  Pratt is an Italian cartoonist and one of my favorites.

As I look at this small sketch I can’t help but reflect on how tired I was when I finished it.  I spent the next half hour just flipping through comics, mindlessly looking at the graphics.

Ultimately, though, I decided to draw Obelix, one of the main characters in the Asterix series of comics that taught most French kids early European history.  Asterix and his buddies are Gauls and the bad guys are Romans.  Obelix was Asterix’s super-strong friend, his loyal sidekick.

We ended that day with a cup of coffee and the sketching banter I have so missed over the past six weeks.  When I got home I took a nap, but I’m getting there…taking baby steps with a limp.

I’m the sort that just draws stuff.  My sketching lacks attempts to generate good compositions, to capture large panoramic scenes, or achieve balance and unity.  I simply draw stuff that interests me.  I realize these other things matter but for me, the fun comes from making lines on a page.  What they define is a very low priority for me.  Goofy view of art, I know, but it is mine.  I’m trying hard to learn these other things, to worry about them, and somehow bring them to my sketches, but sometimes I just like to draw the cool thing and then stop.

Along Rue St. Paul, across from the train station, there are some really great old buildings with lots of gables, towers, and, as my dad used to call it, “gingerbread” that makes them special.  I was walking along and decided to draw one of the towers on a corner building.  But this building goes a long way in both directions, with a bunch of windows and cables.  I didn’t want to spend that much time on it, so I just drew the cool part and stopped.  I was happy with that result. 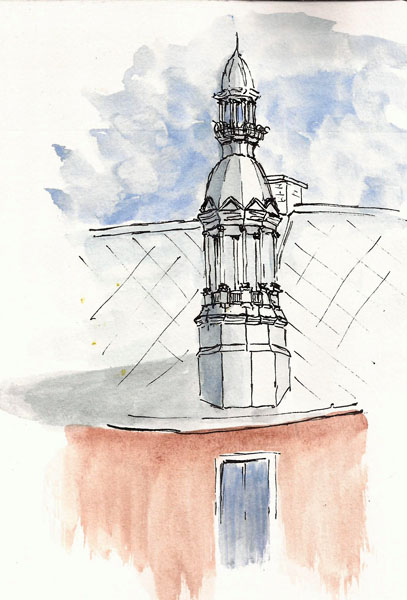 I was walking along the river and decided to draw part of the skyline.  From where I was, these buildings were very small, and very far away.  I decided that I could “improve” things by drawing the buildings larger/closer to me so I put on my ZOOM brain and went to work.

There was only one problem with that idea.  If the buildings were close, I should be able to see a bunch of details.  I could not and so I started stumbling around (figuratively) trying to figure out what details I “needed” to imaginate.  This is harder than it sounds and clearly I need to think about this a lot.  I’m used to drawing what I see and I always err on the side of too much detail, which is the opposite of what I should probably doing here.  So much to learn, so little time. 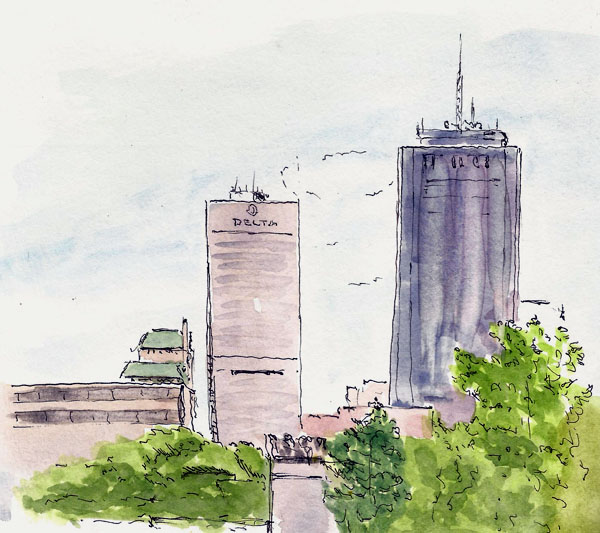 No far from my house is Pont Drouin (Drouin Bridge).  There are benches on either side of the roadway where you can sit in the middle of the bridge and ponder your navel, or maybe sketch.  I chose to do the later, quickly trying to capture the scene without much detail. 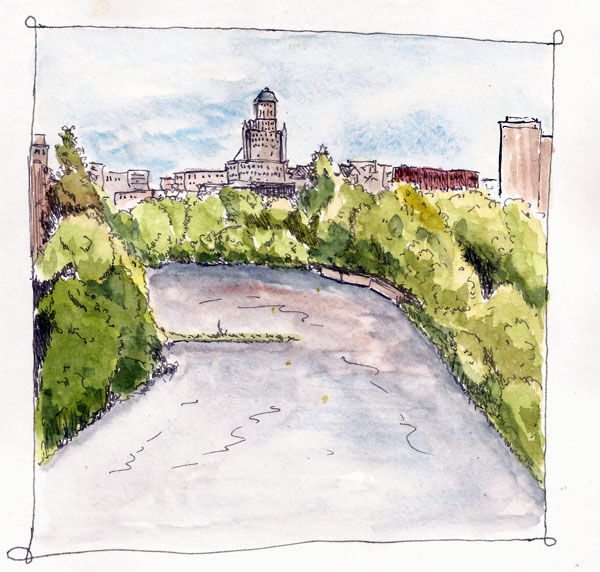 When I came to Quebec I was struck by how people would completely change their schedules if the sun shined, cancelling meetings so they could go on a picnic, taking the day off from work so they could go get a tan, or maybe just to do a happy dance.  Coming from Arizona, it never crossed my mind that sunshine was something to be savoured when it was around.

I’ve learned, though, that rare things have that affect on behavior and it couldn’t be more true this year.  Three of us skipped off to Limoilou to sketch on Tuesday because it wasn’t raining – the sun was shining.  It was a rather short adventure but sketch we did.

I’m working on doing my sketching more quickly than my norm and chose to apply those efforts towards this stately building along 4th Avenue.  It almost looks out of place as it’s far more elegant than those around it and I suspect it once served some special purpose.  I even got to work on my tan while I drew it. 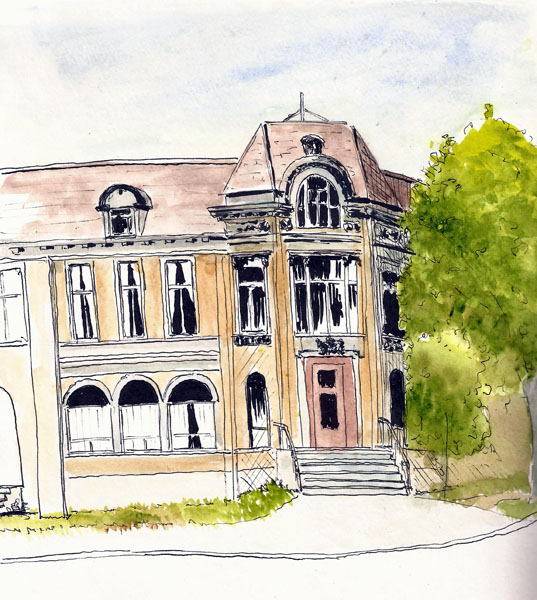