I tend to be fairly pragmatic about my successes and failures when I sketch.  I don’t make a big deal out of succeeding and it doesn’t bother me if I fail.  In fact, failure is an opportunity to learn.  It’s this last thing that gets me in trouble as I also don’t mind saying I’ve failed because I don’t see that as a bad thing. 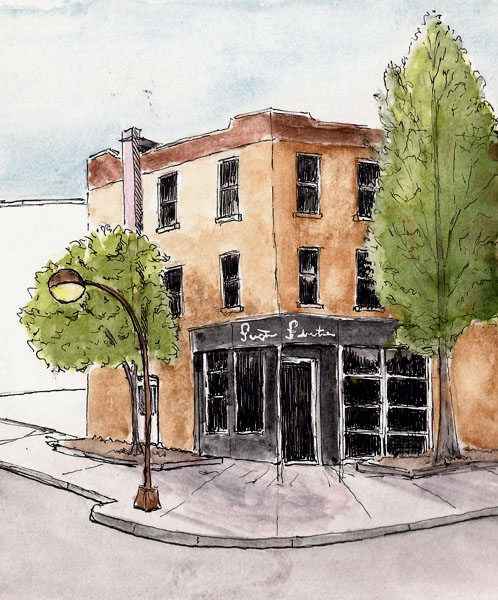 And so it was when I posted this sketch on my blog and on Instagram. I voiced the opinion that it wasn’t my best and this caused Cheryl Wright to ask, “What’s wrong with it?”

Rather than give her a brief answer it seemed her question presented an opportunity to talk about the analysis I do when sketches don’t meet even my low standards.

I tend to do building portraits so composition generally takes a backseat to showing off whatever it is that causes me to draw the building in the first place.  But if I did this one again, I’d move my point of view so that the streetlight wasn’t directly in line with the ductwork on the side of the building and I’d ensure that the globe of the light wasn’t hidden within the crown of the tree.  These things completely negated the raison d’etre for including the light in the sketch in the first place.

Also, the window treatments are sloppy in this sketch.  I wanted to keep them simple but I hatched them carelessly.  Generally I’m still very clumsy with color but clumsy is where I’m at right now with color so I hardly ever assess it.  Maybe some day. 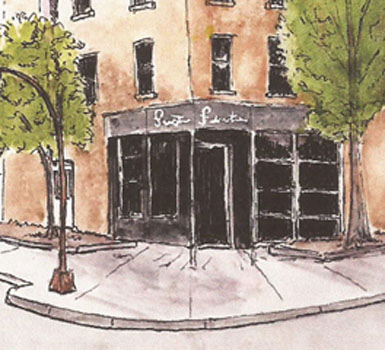 This building is little more than a box.  What makes it interesting is that the entrance and display windows cut across a diagonal of the building, but the building itself is square, creating a ceiling over the entrance and windows.
I completely obfuscated that reality by painting the signs and entrance a dark black, completely flattening this feature of the building.  I’ve tried to play with it in Photoshop to indicate a better way, lightening the signs but I’d messed up the sketch so badly that it was hard to make it look good.  I hope the graphic demonstrates what I am talking about, however.

This is where things really went south, though.  It seems I let my horizon line wander.  I’m not a stickler for perspective and don’t generally think in terms of vanishing points and such.  But it should be the case that the farther one gets from the horizon line, the more steep should be the angle downward or upward towards a horizon line – AND the horizon line needs to be kept constant.  If you are consistent in this way, it won’t matter much whether  each is accurate.  Here, I wasn’t consistent and you can see that the angles go all over the place, crossing in places and being parallel in others.  Shouldn’t be like that and the sketch suffered. 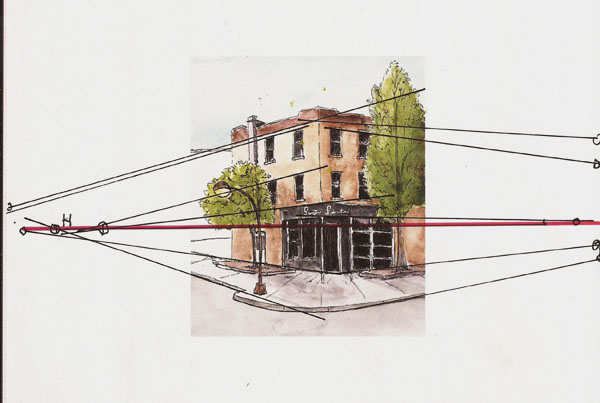 So this is why I said what I said about this sketch.  I agree with what Cheryl said in the rest of her message, “I love its quiet simplicity.”  I only wish I’d done a better job of depicting it.  Thanks to Cheryl for asking a great question.