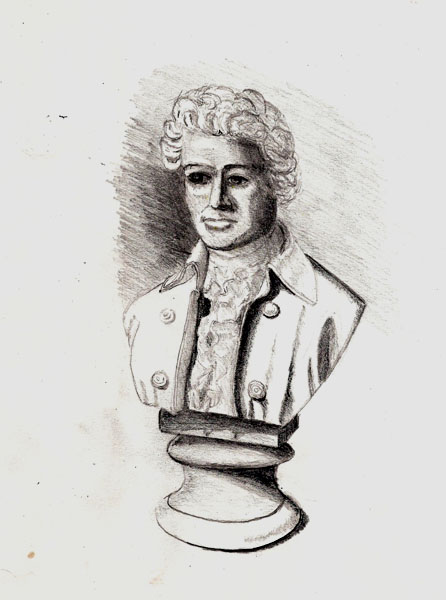 Some would argue this is a good thing as it forced me to look a lot and draw a little as erasers weren’t part of the process.  I think this is true and that it has helped me acquire a rudimentary ‘artist’s eye’, though that eye is still ill-developed.

But at the same time, I missed out on the more typical starting point for someone learning to draw – graphite or charcoal.  The pencil remains a very popular drawing tool and I’m completely ignorant of its uses.  I do carry a mechanical pencil but it’s full of 3H or 4H lead and I use it just to draw a few guidelines to block in a drawing and I quickly switch to pen for the rest.  So I’ve decided that I need to learn a bit about 2B, HB, and 4H pencils and how to rub them around to create value.  I also need to learn what you do with a kneaded eraser.  It’s a very clumsy process.  But I’m trying, mostly with little scribbles and doodles.

Monday I went with Yvan to the nearly hidden ‘museum’ at the university.  It holds the contents of the long defunct natural history museum, the university insect collection, and roughly 300 plaster casts.  These were given to the university sometime in the 19th Century, when art departments thought it wise for their students to learn to draw.  When they decided that you didn’t need to draw to be an artist if you were going to paint with a roller, spatula or by throwing paint at the canvas, all the casts were, well, cast off.  Only the insight and diligence of Madame Wagner, the curator of the ‘museum’, saved them from becoming so much broken plaster.

And so little old me has access to some 300 plaster casts of hands, feet, ears, noses, busts of famous people, and many, many full-size statues.  It makes even this street sketcher say KEWL!  I chose a poet named Benivieni as my first subject.  It wasn’t due to any affinity for him as I have no idea who he is but I liked his hat (grin).

Here’s my first attempt at doing a bust with a pencil.  It’s not perfect but it does, sorta-kinda, look like him so I was both surprised and happy.  I do have to work more on that ‘artist’s eye’ as seeing the half-tones is a challenge, but I think I’ll go back next week.  Those art students don’t know what they’re missing. 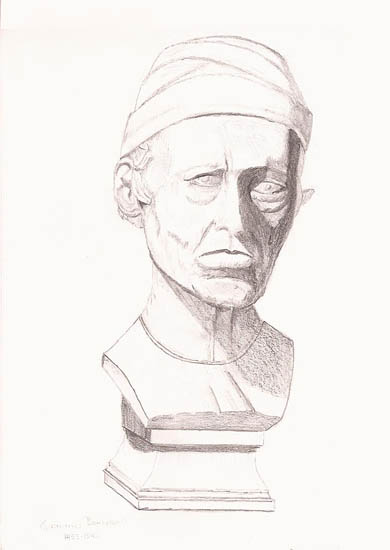