I became officially old last Sunday.  The significance of this is that my bus pass is now less expensive and I’ll pay $2 less for a ticket to a Capitales baseball game.

But, we had a wild celebration of the event anyway.  I was served a nice brunch, prepared by my wife and daughter.  We talked about lots of stuff, most of it not too important.  And then my wife suggested we go for a walk.  Maybe 65 steps, she said, in celebration.  We concluded that 6500 steps might be a somewhat more reasonable length for a celebratory walk.

And so we set out for our 6500 step walk.  We had a great time, though it was a bit windy and one hat nearly ran away on us.  But we passed by the art store, where I bought a tube of Quin. Gold and we continued onward…step…step…step.

We decided to stop and have a pot of tea at Camelia Sinensis, our favorite tea house.  The life of a sketcher’s wife is hard.  As the tea arrived I said, “I should draw that”, pointing at the tea service.  She patiently agreed and spent the next ten minutes watching me quickly sketch the service.  The pot only left the tray once as I sketched it and as she refilled her cup.  I’m sure she was thinking “what I put up with…sheez” and at the same time I was thinking, “I’d better hurry up before she thinks I’m ignoring her.”    Such is wedded bliss. 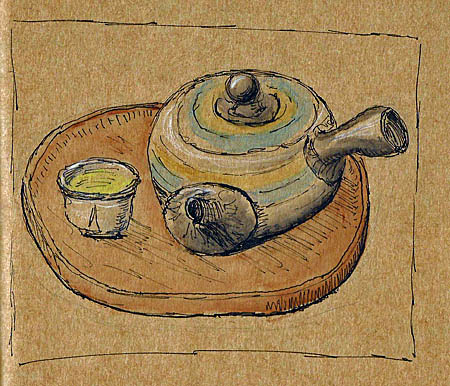 So here it is, my more than a little bit wonky sketch of a Camelia Sinensis tea service.  My first day of being old was a good one and, by the way, we made 9300 steps during that walk.