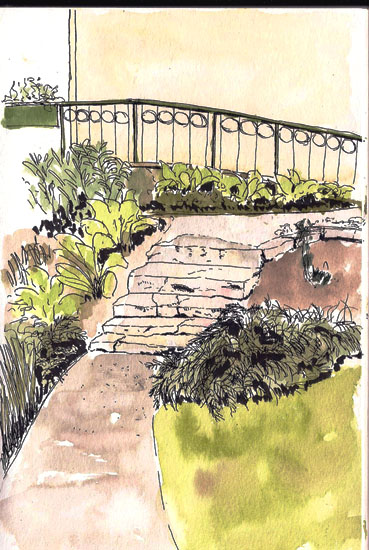 Sometimes luck is on your side; sometimes it’s not.  I’m still not sure which of these occurred yesterday, when we held our second Croquistes de Quebec sketchcrawl.  The day before the event the weather reports were suggesting 20-30mm of rain for the day – not exactly what you want to hear as an organizer of an outdoor event.  But when Sunday morning arrived, the report had been downgraded to 1mm of rain.  It was windy and it had cooled significantly from the nice temps we’d had all week.  Things, shall we say, were not looking good.

But, intrepid sketchers that we are, Yvan and I arrived at Parc Parc du Bois de Coulonge bright and early with smiles on our faces, though our collars were turned up and hats pulled down tight onto our heads.  We started sketching, hoping beyond hope that someone else would show up.  I’d be lying if I didn’t acknowledge that we were doubtful. 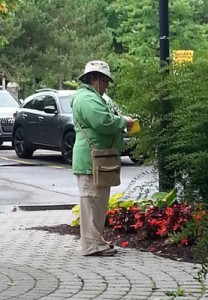 But alas, there are other dedicated sketchers in Quebec City and soon, Agathe showed up.  She’s a passionate sketcher that did a great sketch of me sketching.  I wish I had it to share with you.  Later she became interested in drawing some of the plants in the park. 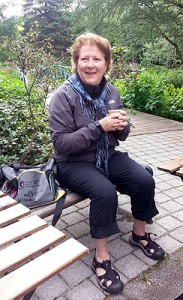 A bit later Guylaine arrived and began drawing a building that’s right out of one of Disney’s animation movies, with more gables and turrets resting on its small footprint than any building deserves.  I think she was the really smart one among us as the building houses a coffee shop and she got to sit at a table while she drew. 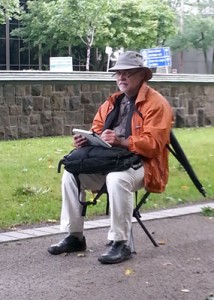 It was cold, however, and very windy.  Rain seemed just around the corner, though it didn’t actually rain until Yvan and I were heading home late in the afternoon.  The two women had had enough by lunch time and left but since we had established both a morning and an afternoon meeting time, for those who couldn’t make it in the morning, Yvan and I felt compelled to stay.  We headed to the afternoon meeting place, and while our spirits were cold, they had yet to be dampened, at least not literally.

Yvan decided he was going to draw the grand building at the head of the large garden/fountain/open area that is the heart of the park.  Being of more modest abilities and energy, I decided to draw what is now the information center.  It used to be the hub building for three greenhouses that splayed out in three directions but had been removed.  I found the building fascinating, particularly from my perch on a hill above it.  I still need to draw some of the garden behind it. 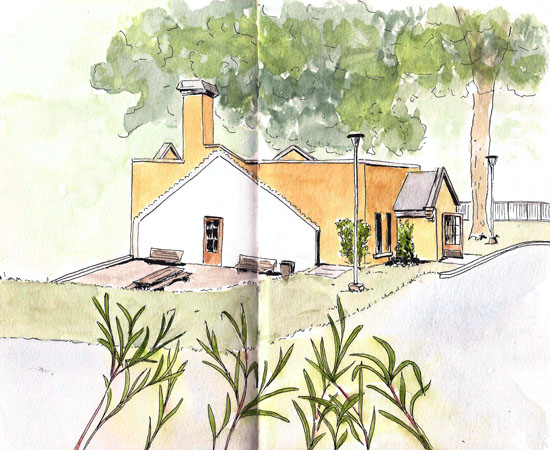 One thing Yvan did during the day was accumulate drawings of the lamps and fixtures within the park.  I thought I’d share it with you to give you some indication of this guy’s talent.  These are his “quick sketches,” each taking him only 2-3 minutes. 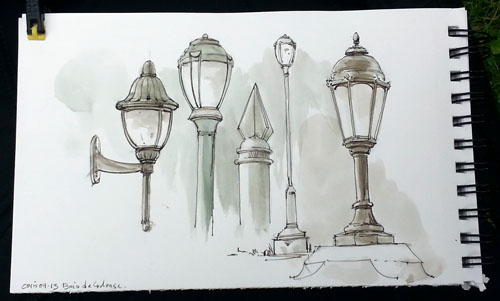 In the end, the bad weather reports and the cold reality diminished our numbers and was unlucky.  On other hand, four of us had a great time getting together to sketch.  Overall I think we were lucky because we all went home happy and dry.  Besides, it’s supposed to warm up tomorrow and I’ll be out sketching.