One of the things I love about Quebec City is that there is an obvious location of the founding period of the city.  Our “old city” is a UNESCO Heritage site, as it is the oldest walled city in North America, officially founded in 1608.  The history is rich and evident.

And as Quebec City grew, people moved beyond the walls and the city spread outward as lava flows from a volcano.  This outward movement was limited by the St. Lawrence River to western and northwestern expansion.  The result of this slow expansion is a “map” of how architectural trends changed over the years from 1600 to the present and, as a sketcher, it can be examined much as an archeologist examines layers of rock.

I’ve spent most of my time sketching inside the old city, as the architecture there is both early and a combination of French and British influences.  But, if one wanders away from the walls of old Quebec by just a few kilometers, one hits the motherlode of Art Deco architecture.  Bay windows and corner towers give way to rounded walls, flat roofs, and frosted glass decorations – a completely different world from the French architecture of our Chateau Frontenac, the architectural symbol of Quebec City.

Here’s my first art deco house sketch but it won’t be my last.  I love the cobblestone-like rounded wall and the door.  I’m looking forward to mining the art deco layer of our architectural history.  Sketching in Quebec City is exciting and fun. 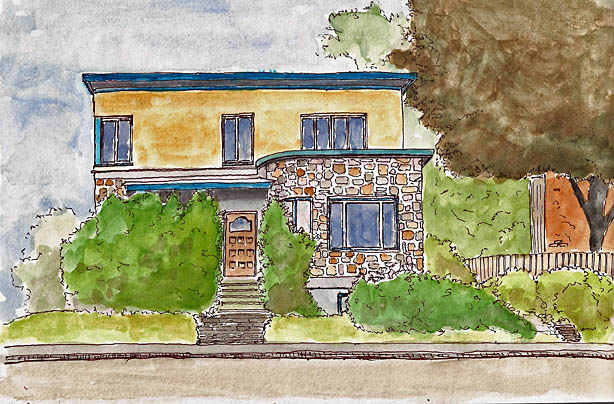