On Good Friday I met with Claudette and Yvan at the Musee de la Civilisation to sketch but we were facing a day that seemed enticingly warm.  When I type that I have to chuckle.  I’m an Arizona guy so for me to say that a high temperature around 40F is warm is, well, an exaggeration that comes from a brain that’s spent the last few months without sketching outdoors. 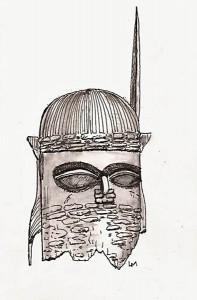 We sketched indoors and packed up around noon.  I did this sketch  during that session.  I sort of screwed up the eyes somewhat but it was fun doing this sketch anyway.  With a rock wall for a beard and hat, what’s not to like?  It was done in an S&B Epsilon (5.5×8.5), with a Pilot Prera and Lexington Gray ink.

Then, Yvan and I headed downtown where one of his friends was sitting in a window, sketching people on the street who were willing to pose for ten minutes.  That was fun to watch, for a while, but I got cold just standing around and I decided it was time to head home.  And so I did.

When I arrived home my wife and daughter were out shopping so I decided I’d wander the neighborhood and see if I could sketch something outdoors.  After all, it WAS 42F!! 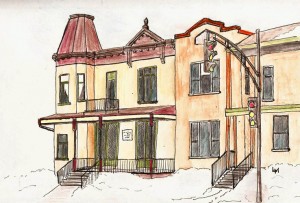 I’ve walked by this building many times and have said “I’ve got to sketch that” an equal number of times.  It was built in 1927 but today was the day it was going to be sketched.  Besides, I wanted to try out my new Stillman & Birn Zeta sketchbook.  I used my Pilot Prera/Lex Gray combo  and, because I had my museum stuff with me, I used watercolor pencils to do the color.  I was uncomfortably cold towards the end but clearly spring sketching is about to begin and I’m getting excited.  Sorry that much of the light blue in the sky and in the snow got lost in the scanning process.