The change of seasons, for me, means transition from street sketcher to museum sketcher.  It’s a sad time, but also an exciting time. There’s so much shape variation in museum exhibitions.

Our Musee de la civilisation has a new exhibit just opened that presents Australian/New Zealand aboriginal art and as I play didjeridu and love aboriginal art, I’m quite excited about it.  Most of the exhibit is paintings, rugs, and such but there are some statues and masks that I’ll be taking advantage of this winter.

I was there a few days ago, drawing a large wall-hanging mask.  So were a bunch of kids on school outings.  The kids were great as they’d come to see what I was doing and when I talked to them I got half a dozen more coming to see what was going on.  This begat more and more kids to the point where I was mostly just talking to them about the watercolor pencils, waterbrushes, and how much fun it is to draw.  Kids “get it.”  They haven’t learned the feelings and emotions about art that adults somehow acquire.

Eventually they wandered away, though, and I got back to drawing.  I was really enjoying the music and serenity of the room.  A mother and her two young daughters (I’d guess they were 4 and 6) came by and, again, the kids were interested and, as is often the case with parents, the mother told them to leave me alone.  I told her it was fine and I showed them what I was doing.

The older girl had some sort of writing/sketching book with her and started to draw with me.  The younger one, of course, wanted to draw too, which sent mom scrambling for paper and pencil.  She found some paper but had only a Seattle Seahawks pencil with her and it needed sharpening.  I sharpened it and we chatted as I did.  They were on vacation from where some of my favorite urban sketchers live – Seattle.

The kids drew a bit and I finished my sketch.  The older girl came over to show me her drawing and I asked her if she wanted to use my watercolor pencils to color her drawing.  Her look was priceless and I loaned her one pencil at a time.  The same thing happened with the younger girl.  We had a regular sketchcrawl going on.

I wish I had been smart enough to take some photos.  Sadly, all I can share is the sketch I did, but it was the most insignificant thing that happened on this day. 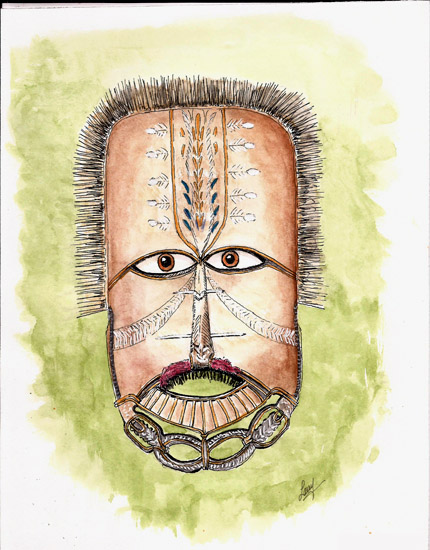