This is a topic that is discussed regularly.  For the most part it comes up because so many people claim they have no time to draw and those of us who draw spend lots of ink explaining that it’s easy to find time to draw.  I suspect those saying they have no time take those ‘explanations’ with a grain of salt and dismiss them as “well you may have time but I don’t.”

So I thought it might be interesting to start my own approach to this subject by saying that it can be hard to find time to draw if you define drawing as creating a masterpiece.  If you’re picky about what you draw and when, time may become an insurmountable problem.  It’s sort of like a pianist deciding that “playing” means a complete concerto.  But that same pianist sees a piano and they’re inclined to sit and play a few notes.   I’m hoping that maybe, just maybe, my recent trip to Ottawa will present a few solutions to the time problm and maybe loosen up the definition of an acceptable drawing.

Before I do this I want to point out that the value here, of ‘drawing’ or ‘sketching’, isn’t defined in terms of the finished product.  Value comes from the experience and fun of the doing.  That simple shift in perspective changes everything and opens the doors wide.

Most of what you’ll see here are quick sketches done in a cheap sketchbook that I wouldn’t normally scan or present them to anyone.  But I had fun doing each one and each of them gave me joy and experience.

This was a very busy trip for me.  It wasn’t a “let’s go sketch in Ottawa trip.”  Rather it was a “let’s move our daughter to Ottawa” kind of trip.  Our daughter was moving away for the first time so lots of emotions were heaped on top of the pragmatics of such a move.  There was no situation where I was alone and had large blocks of time to sketch.  I did sketch, however, and the thing that allowed it was having a pen and sketchbook in my pocket at all times.  In this case I carried a pencil, pen, and a small Monologue sketchbook.a 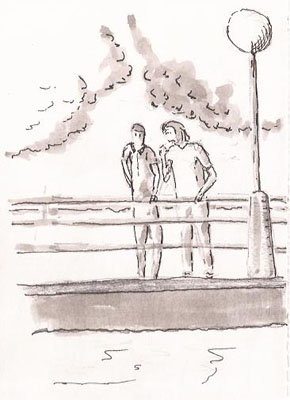 My wife and I went for a walk along the Rideau Canal the morning after we’d moved my daughter into her new apartment.  We needed to decompress a bit and the relaxing walk did us a lot of good.

At one point my wife decided we should sit a minute and I always do what my wife tells me.  We sat.  There were two people looking at the canal on the other side, so I pulled out my sketchbook and, in less than a minute, I drew this quick sketch of them.  It’s not very good but it’s useful to try to capture a subject in a few lines, even if they’re wavy lines (grin). 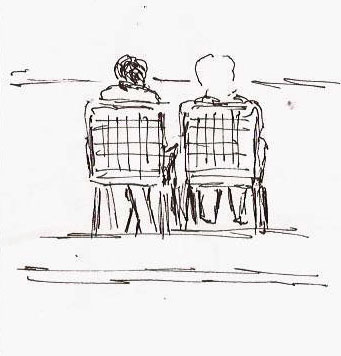 Beginning drawing classes love to have people who can’t draw try to draw without looking at their paper.  This is supposed to be good for you.  I don’t believe it for a second, but once you can draw a little bit, this exercise can be valuable. 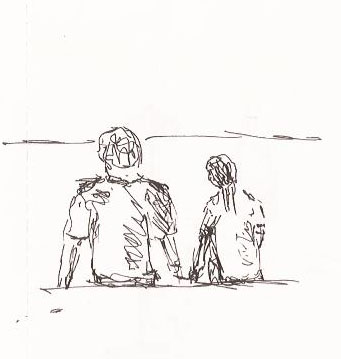 After spending the day moving stuff into an apartment and dealing with separation anxiety issues, my wife and I found ourselves sitting in a boring hotel room.  We decided to walk to get some coffee.  She suggested that we walk to the Parliament building and enjoy the evening drinking our coffee plein air.  When we got there we found out that the great light show they do every night was going to start in half an hour, as soon as it got dark enough.  We decided to stay to see it and so just relaxed and chatted, sipping coffee on a wonderful summer evening.  This moving stuff wasn’t so bad after all. 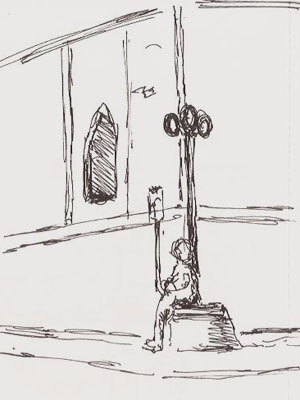 As the show was about to begin we moved to a spot where we could sit on a curb (hard for an old man) and watch the show.  It was dark by then but we still had to wait a while for the show to begin.  I got the crazy idea that if the art world thought I could draw without looking at my paper, maybe I could draw the vague forms moving around in the dark without seeing my paper.  I’ve never been accused of being sensible.

I got out my TWSBI Mini, my Monologue A6 sketchbook and started drawing.  These are three of the sketches done in the dark.  I did hold the book up over my head once in a while as it allowed me to catch a bit of reflected light from the street to look at my progress.  Then I’d stick the pen tip on the paper and return it to drawing position so I could continue drawing.  It was so much fun I think I’ll try it again sometime. 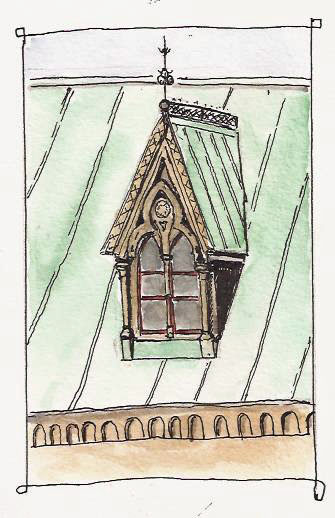 Our daughter had to spend some time at the university picking up stuff, signing papers, etc.  We were “free” for a couple hours.  We made a disappointing visit to an art supply store that was, well, short of supplies in my opinion.  So we decided to wander around the Parliament grounds with the thought of sketching.  It would be tough for me to do one of my “takes forever” sketches so I had to choose something that wouldn’t take a long time… maybe a piece of something.  I chose to do one of the gables on the original Parliament building (built in 1883 I think).  Perspective suffered due to the rush but dems da breaks.

Then we went back to the Rideau canal where I managed to spend half an hour drawing one of the modern buildings which will be made famous by our daughter attending her classes within its walls. 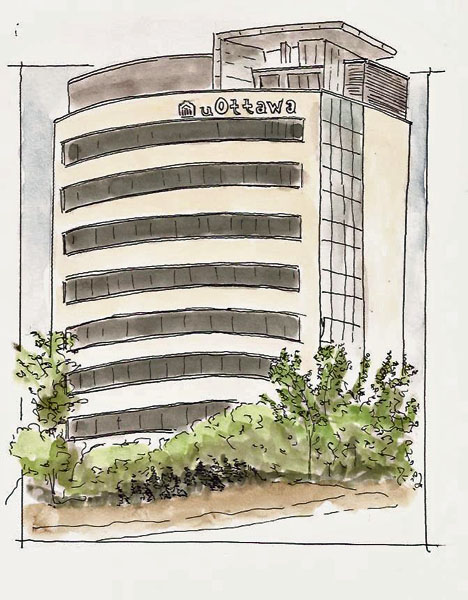 These last two sketches consumed less than an hour of time and that time was hard to come by.  For the rest?  Easy peasy if you have a sketchbook and pointy device with you.  Are the quick sketches worthy of showing to your friends?  Not sure but they were just as much fun to do as these last two and isn’t that why we sketch?

9 Responses to “Sketching When You Have No Time”