This is the time of year that a street sketcher, living in a part of the world that turns dark and cold for five months, starts thinking about what he’s going to draw for the next few months.  One thing that’s occurred to me is that there are many things I simply can’t draw ‘on location’ because they simply don’t exist any longer.  Why not draw those things, from photos or museum examples?

So, when I was sketching at a small display in the Laval University library, I decided to draw the passenger pigeon that was on display.  It’s 100 years ago, this year, that we finally ‘got the last one’ of some five BILLION of these birds that once inhabited North America.  Enterprising European immigrants, showing their mettle, blew every last one of them from the sky.  What a proud accomplishment.  It might be ok if we would have said “oops…we shouldn’t do that again” but we continue to do it, over and over and over.  I heard on the news the other day that there are currently 50% fewer animals on our planet than there were just 30 years ago.  How much longer can we continue to be so stupid?  Not much longer unless we wake up and stop our denial about what’s going on.

But enough of an old biologist grousing about what unbridled disregard for everything but money is doing to our world.  Back to sketching.  I had never seen a passenger pigeon before.  It looks very much like a very large, somewhat elongated mourning dove and certainly more lean than it’s domestic pigeon cousin.  I drew this one in a Stillman & Birn Delta sketchbook with a Pilot/Namiki Falcon pen.  The color comes from Faber-Castell Albrecht-Durer watercolor pencils.  I love these pencils and every time I get them out I wonder why I don’t use them more.  The wing primaries should be darker. 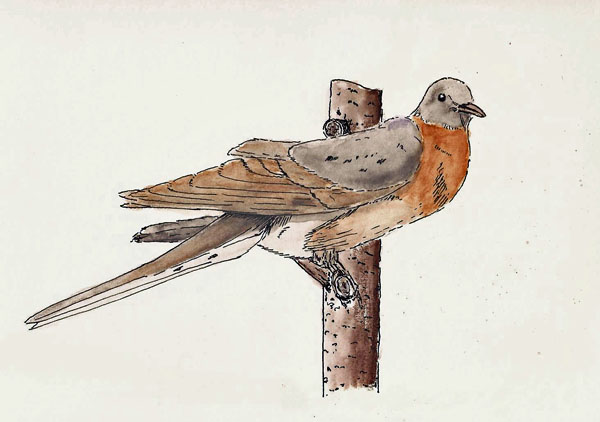 4 Responses to “Sketching The Past”