I’d arranged to meet sketching buddy Claudette downtown and so it wasn’t completely nuts when I started walking in that direction in spite of the fact that I was walking in a cloud.  It wasn’t raining but a mist was collecting on my glasses and clothes.  Walking fast beat the cold away, though.

When I met Claudette we sort of looked at each other and both of us were disappointed with the morning.  We decided to walk through the old port area looking for something to draw but I think neither of us had our hearts in it.  It was pretty miserable, depressing weather and we ended up ready to cancel completely.

Claudette spotted a cast lion that was part of the entrance to a building and as we looked at it we both decided it would be worthy of a sketch.  What I saw was how we humans have lost site of esthetics in favor of convenience and modernity, or whatever word you want to use.   Someone had destroyed much of the beauty of the lion casting by installing a large electrical plug below it and wrapping a wire up around it.  A real artist would probably have drawn the lion, leaving the plug out and ‘improving’ their drawing.  I’m more about documenting city life and thought this debauched piece of art could be the subject itself.

I did make the mistake of doing it in too small a format for a shaded pen drawing like this and both the lion and plug suffered from a lack of space for proper shading.  Nevertheless, here’s the 3×4 sketch, done in a Moleskine watercolor book.  I used my Pilot Prera and Platinum Carbon Black. 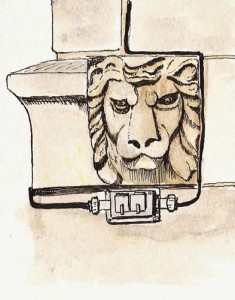 2 Responses to “Sketching The Good And The Ugly”