As I was riding the train to Ottawa I was planning where to point my feet for my upcoming sketching adventure.  First stop was to be Parliament, where I wanted to sit directly in front of Parliament’s Peace Tower and draw the entire building in one-point perspective.  It’s classic Ottawa.

There were two problems with that idea.  The first is that every government building in the city seems to be under construction, or if it isn’t, you can’t go there because of some other construction.  The entire Parliament area is full of cranes, fencing and the buildings are shrouded in scaffolding.  All of this, I’m told is being done in anticipation of July 1, 2017, which will be the 150th anniversary of Canadian confederation.

Ok…but what’s that huge, can’t see the building stage that’s sprawled out in front of Parliament.  Well, that is for Canada Day 2016.  Sometimes timing is everything and mine wasn’t great this time.

Undaunted, I decided to draw a portion of the Langevin building, which is a very long government building.  I have no idea what they do within it but the south side steps of the East Block building served as a great perch to draw it.  And so, with lots of tourists walking by, I drank coffee and drew a building. 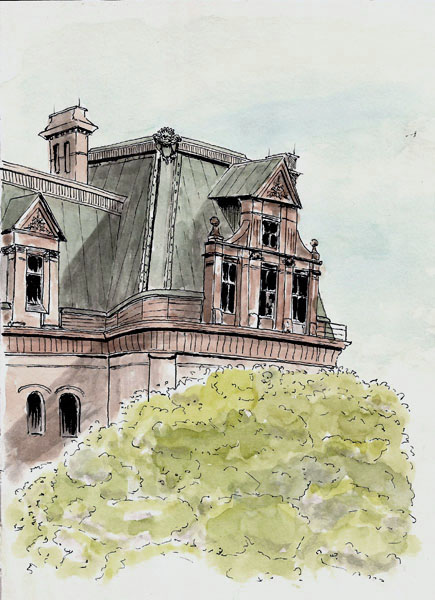 If you walk south on Elgin from Parliament you’ll find an old house (mansion?) that seems to have been converted into a small hotel or B&B.  What’s striking about it is that all around it are modern high-rise buildings.  It was a must-draw but I was unsure what to do with it.  On the one hand I wanted to draw it small with the huge skyscrapers surrounding it.  But this would shrink the building so much that I wouldn’t be able to give it any of the ‘from a different time’ feel that it exuded.  In the end I decided to just draw the building, without any of the large buildings.  Someday I’ll do it the other way I’m sure. 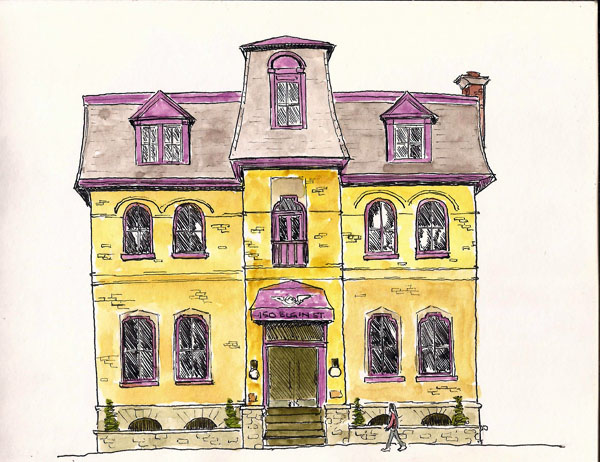