Last Sunday Yvan, Pierre, Celine and I headed to the Musee de L’Amerique Francais because they were launching a new display of art done in Quebec long ago and donated to the Catholic church who kept the collection in their museum.  We didn’t know what to expect but since it’s still too cold for outdoor sketching, what the heck, we were going sketch art.

Much of the art in this collection is religious art, not my favorite way to use display space.  I find most of it too gawdy and repetitious.  But one room was filled with some amazing Quebecois pieces, many that would be considered ‘urban’ art today.  I was looking for a new challenge, something different… at least for me. 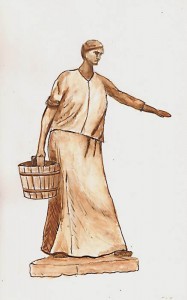 After looking around, I settled down to sketch a bronze statue of a woman carrying a heavy bucket.  I was struck by how well the sculpture captured the physical effort and body/arm positioning to maintain balance with a heavy bucket in one hand.

This was a considerable leap for me as I’m not good at drawing human forms and I had no idea how to make one look like a bronze statue.  Still, it was fun.  I drew it in a Stillman & Birn Epsilon (5.5×8.5) with a Pilot Prera and Lexington Gray.  I used watercolor pencils to fake the bronze look.

There were many paintings that seemed worthy of turning them into a Larry sketch but one in particular caught my eye.  It was a painting of a 19th Century seminary courtyard, a courtyard that was actually just next door to the museum.  I went outside to look at the real thing and found what a hundred years can do.  The basic building layout remained.  In fact, on one edge of the courtyard, the end where the artist stood, there exists the remains of an old wall, clearly a very old wall.

Aside from that, everything had been remodeled and updated.  The two main buildings had an extra story added to them and all the windows had been modernized.  The stairway was gone adn the entries had modern doors.  It definitely looked cooler in the 19th Century so I went back indoors where it was warm. 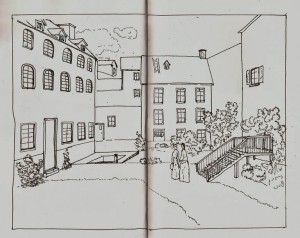 I’d never sketched an oil painting before and converting it to my cartoon sketching style did present some challenges, but it was fun, too.  Done in the same S&B sketchbook but with a Lamy Safari as my Prera ran out of ink .   I’m not sure I’ll add color to it as I like it au natural.

We’ve vowed to return to sketch some other pieces, particularly some of the sculptures.   A great day was had by all, but every sketching day is a great day, isn’t it?