I’m no expert to artist materials.  Most of the time when I talk about using them the discourse begins with me saying “This is the first time that…”  This is almost true of my use of toned paper in my sketching activities.  During last summer I made a small sketchbook from toned paper (Canson Mi-Teintes) and I did a few pen sketches in it.  Unfortunately, the sketchbook itself wasn’t stiff enough (thin covers) to work well as a sketchbook to use on location while I held it in my hand.

Now that it’s winter and very cold here, I’ve been working a lot in museums.  This shift in location and subject matter has been coupled by me doing some experimenting with different tools and materials and recently I’ve done a couple sketches on single sheets of gray, toned paper and I thought I’d share them here. 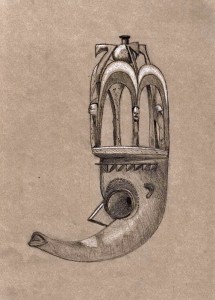 The first was done at the Musée de la Civilisation, in a large Nigeria exhibit that features lots of masks and headdresses used in ceremonies.  This one was done in Canson Mi-Teintes paper.  As I am also trying to learn how to use a pencil as a sketching medium, I used the smooth side of this paper and it worked well.  Not being a pencil guru, I started layout with a 3H pencil and ultimately ended up with an HB mechanical pencil.  Nothing special here and, I’m sure, most pencil experts will probably cringe that I didn’t use softer pencils.  I added a bit of highlight using a Prismacolor white pencil but I was fairly tentative in this as I’ve never done that before at all.  Still, the results ended up better than I expected.

The next sketch I did was done during our 38th Worldwide Sketchcrawl, which we did at the Musée de Francais and its associated chapel.  The chapel has been ‘secularized’ and is rented out for meetings and banquets.  Still, its walls are still adorned with statues of saints, the windows are stained glass, and a huge alter remains. 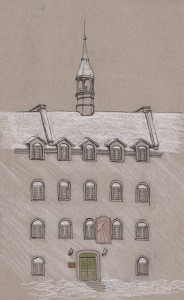 But I love to sketch buildings and being driven indoors by snow and cold is frustrating.  I took advantage of the sketchcrawl to set my tripod stool in front of a huge window that looked out on a courtyard that was bordered by a very long, probably 150+ feet long building.  Rather than capture the entire structure, I decided to concentrate on a slice of it and I came up with this sketch.

This sketch was done on Strathmore Series 400 “toned gray” paper.  I bought a 9×12 spiral sketchbook of this stuff.  The sheets are perforated and can be easily separated from the sketchbook.  I did the linework with a Pilot Prera filled with Noodler’s Lexington Gray ink.  The suggestion of snow was added using the same Prismacolor pencil I used in the first sketch.  I like this paper a lot.  It’s much cheaper than the Canson paper and it’s a great pencil paper.  I felt that it was a bit too absorptive for ink, though.  A heavy line tends to feather a bit.

I really like drawing on toned paper.  I’m less wild about using single sheets of paper for my sketching and wish Stillman & Birn would create a gray version of its Epsilon sketchbooks.  A sketcher has to have a dream (grin).

7 Responses to “Sketching On Toned Paper”