I have few inherent talents.  I can’t throw a ball 100mph.  I can’t devise new laws of physics.  But I’ve got an intense curiosity and my persistence factor is off the charts.  .

I have come to art late in life and my solution to the ‘you’re old; you don’t have much time’ dilemma has been to read everything and anything about drawing, coupled with a whole lot of doing.  Nick Meglin (Drawing From Within) is right when he says that the book that will teach you the most about drawing is your sketchbook.

But there are insights one can glean from books and those ideas and techniques can have small or large effects on how quickly you can progress.  Besides, I’m an ex-scientist and that translates into a view that understanding what smart people think is good for me.

A few things have come from wandering through dozens of ‘drawing books’ written from the 1800s onward.  It’s clear there is a difference between how drawing was once taught and how it’s being taught now.  If one reads 19th Century drawing texts one is taught to draw everything and to do it from observation, probably because most jobs for artists actually required that skill.  Modern texts from the art world all seem to assume that artists draw naked people or draw from their imagination in a studio.  It’s barely acknowledged that anyone goes out and draws planes, trains and automobiles anymore and, if one looks at the art hangs as ‘modern art’ in museums, they don’t.  Deanna Petherbridge suggests, in her Primacy of Drawing, that a renewed interest in representational art is causing a renewed interest in drawing.  I hope she’s correct.

Another thing I’ve noticed is that the sketching world is full of very good sketchers, drawing from observation.  They are masters of their craft; they are my heros.  A surprising number of them are graphics illustrators, comic book and animation artists and ARCHITECTS!  Liz Steel, Gerard Michel, Tia Boom, Matthew Brehm, and my buddy Yvan Breton all come from architectural backgrounds.  And when you talk with them it’s easy to see why.  Their schooling required them to carry sketchbooks and draw everything and anything on location. 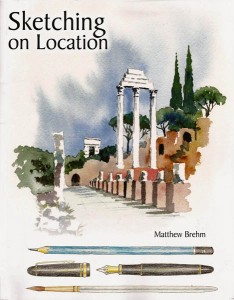 I’ve finally been able to buy a copy of Matthew Brehm’s book Sketching on Location and it is one of the few books on location sketching I’ve seen.  And is it ever good.  I reviewed Freehand Sketching by Paul Laseau (another architect) and  underscored his distinction between location sketching and sketching from photos/imagination.  Brehm makes the distinction and provides an extensive toolkit for those wanting to draw from observation.  He begins his book thus: 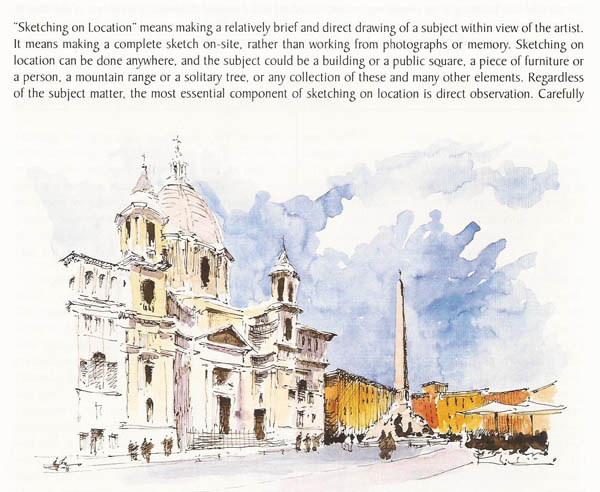 The differences between drawing from observation and drawing in a studio are greater than most seem to understand.  The best example of this is “perspective”, a term used by artists for everything having to do with showing depth on a 2D surface, it seems.  A quick scan of art books can yield authors saying they perspective to create perspective.  But mostly the word is associated with a lot of geometry, mind-boggling geometry.  The result are people who say “I can’t draw buildings because I’m not good at perspective” but who can draw gorgeous figures, flowers, etc. where the very same “perspective” exists.

And why does this view exist?  Because nobody ever told artists the Catch-22 of linear perspective when applied to location sketching.  If you’re going to determine the vanishing point for a building wall, you’ve got to ‘see’ the angles, at least the top and bottom horizontals before a vanishing point can be determined.  If you can see the angle, why do you need the vanishing point?  While it’s useful to understand the basics of linear perspective, when doing observational drawing the building is right in front of you.  You don’t have to make up the angles; you just have to see them. 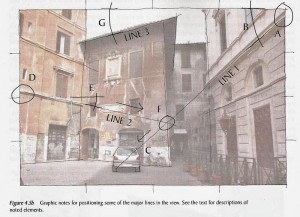 Brehm uses the term ‘composition’ as a way to build connections between objects, determine the observed angles, sizes and to identify convergences that make it much easier to capture a scene that is in front of you.  I know these methods as ‘scaffolding’ but the ‘rose by any other name…’ cliché applies here.  He does discuss linear perspective as well, but from the point of view of its more limited uses in observational drawing.

These sections of Brehm’s book alone are enough to change how you approach observational drawing.  But his approach to other, more typical drawing subjects (eg – value, color) all emphasize, as one might expect, how they are used by the observational sketcher rather than a studio artist.  I highly recommend this book to anyone who is interested in drawing real things, in real places.  This book will help you almost as much as your sketchbook.