Yesterday I promised that I would scan and post the other sketches I did when out with Louise and Claudette.  We walked to rue D’Auteuil, a street just inside the wall of old Quebec City, and a street on which I lived while doing a post-doctoral fellowship here back in the 80s.

On this day, however, the goal was to sketch the bust of Dante, at least that was the goal Claudette and Louise had set for themselves.  I seem to be in ‘Let’s try this’ mode right now so I sat on a bench and did a series of small thumbnails of stuff I could see from this one location.  It was something that Liz Steel did in her Foundations class and it seemed like a fun thing to do.  I just drew small frames and drew inside them with my Namiki Falcon.  It was as fun as it seemed when Liz did it. 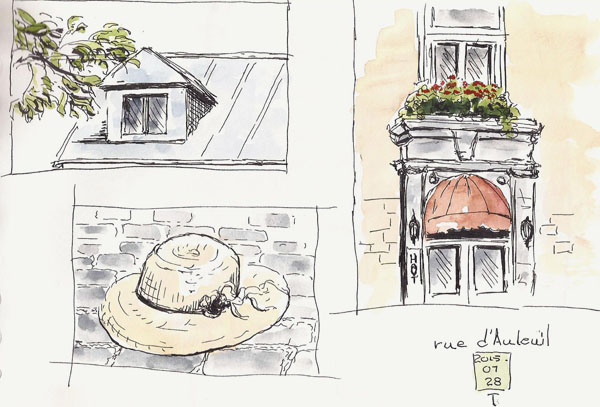 With Dante sketched, we ate lunch and then headed for coffee.  Coffee drinking took us to the Plains of Abraham where we enjoyed a nice time sitting the park and chatting.

Once we were sufficiently caffeinated, Louise and Claudette decided to sketch the Charles De Gaulle statue, something that did not interest me so I started walking around, enjoying the ambiance of Jardin Jeanne D’Arc and all its flowers.  Nothing caught my eye enough to cause me to stop gawking at flowers and so by the time I returned to Mr/ De Gaulle, Claudette and Louise were well along with their sketches.  I decided to quickly sketch Louise sketching and had some fun, quickly generating the scene around her.  This was a very good sketching day. 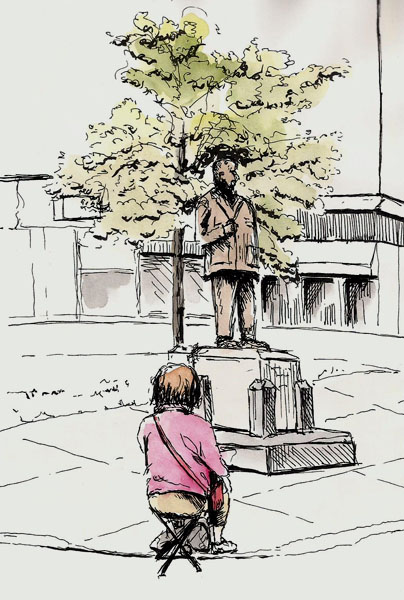 One Response to “Sketching In The Sun – Part Two”