It seems as though we won’t be having a summer this year.  Lots of rain and temps cool enough that we’re back to wearing jackets to go sketching.  Pretty odd for July, even in Quebec City. 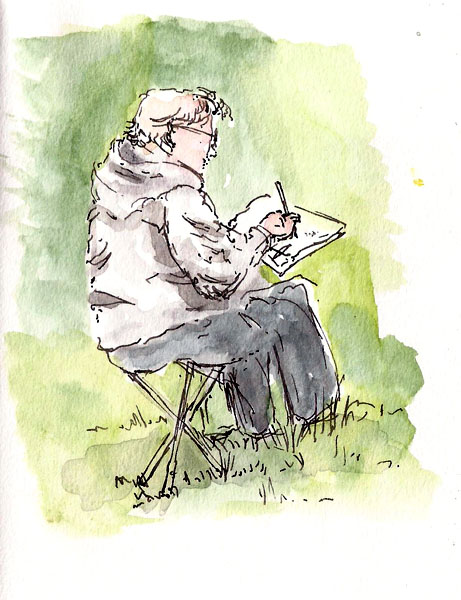 We headed to a large garden in Ste-Foy last week for a sketching session.  Reports said the rain wouldn’t start until late afternoon, though it looked as though it could rain at any minute.  We’re getting used to the dull days, though, so we didn’t think much of it.  The garden brought reality home to roost.  There were so few flowers, so little growth.  The trees and grass were all very green, probably because of the rain, but the garden plants looked like it was April.

Everyone cast around for something to draw and I started by drawing on of my fellow sketchers.  I admit my heart wasn’t into it but a quick sketch was done quickly.  After this I got up and started wandering the grounds, around and around I went.  Nothing inspired.

There were some people weeding some large beds and they had a small garden vehicle in support.  I decided “why not” and sat down to draw it.  A woman came over and asked if I wanted her to move the vehicle, thinking I wanted to draw the garden, but I explained that I was going to draw the vehicle.  She laughed, probably thought I was nuts, and I set to work.  Here’s what I came up with.  Not a Rembrandt but it sure was fun to draw. 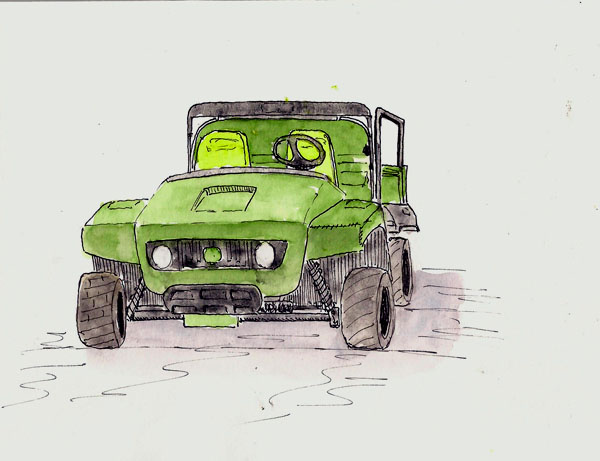