There is an exhibit at our Musée de la Civilisation right now called Haiti In Extremis, at least that’s what it says on the wall as you enter.  I think it may be Latin for “weird stuff from Haiti” but I’m not very good with Latin.  Anyways, this is an exhibit of art that has a heavy emphasis on scaring bad spirits away from the places that display it, so much of it is designed to be scary.  Another component of the art is that the sculptures are composed of old car parts and other assorted junk.  I’ll be honest.  It doesn’t appeal to me.

But I was sketching at the Musée last Sunday with Yvan, Claudette, Pierre and Celine.  We had a ball and several of us sketched what amounted to a human skull, perched on the base from some sort of rack.  The skull was draped with a shawl and fake hair added to one side.  This ‘unit’ was stuck on top of a television set.  Don’t ask me why or what as I might not say the right thing.

But as with all sketching, it was an interesting challenge and lots of fun.  Here’s my depiction of the piece, though I omitted the television set.  Done in a Stillman & Birn Zeta sketchbook (6×9) using an Wahl-Eversharp gold nib pen (love the flex in this pen) and Noodler’s Black, which smeared a bit when I added color (watercolor pencils/waterbrush). 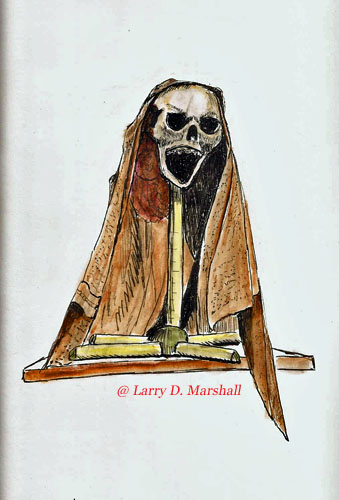