Anyone who has taken a basic chemistry class has been taught about Brownian movement.  Blame Robert Brown for that as he’s the guy who first saw small particles, suspended in a liquid, dancing around randomly, a result of many collisions with unseen and inumerable numbers of atoms that vibrate constantly.  It took Al Einstein to explain what was going on but Bob saw it first.  Timing is everything and Bob is forever famous for it.

So, what’s that got to do with sketching?  Well, I went sketching today.  I went to the mall because every Easter they have a bunch of cages with farm animals that thrill the kids to no end.  I figured that sketching kids and animals would be a good idea.  Little did I know.

This year they did things a little different.  Instead of several cages and fenced areas, they had one fenced area.  I’d guestimate it to be 15′ x 25′.  They added to this area a dozen or so goats and sheep.  They threw in a couple small pigs and a gorgeous Alpaca for variety.  What a great opportunity for a sketcher.

But throw into this area a dozen or so little kids chasing the animals around, and the animals chasing the kids around.  Add to this mix a bunch of parents, explaining to their kids that they wouldn’t be eaten and that instead, maybe they should try to feed the animals.  And what do you get – Brownian movement.  Everything within that fenced area was in constant motion.  Maybe not random motion as the goats figured out pretty quickly which kids had food and were in chase of them.  Everything was moving, except for the big parent-like entities that stood around, blocking the view.  Not such a great opportunity for a sketcher. 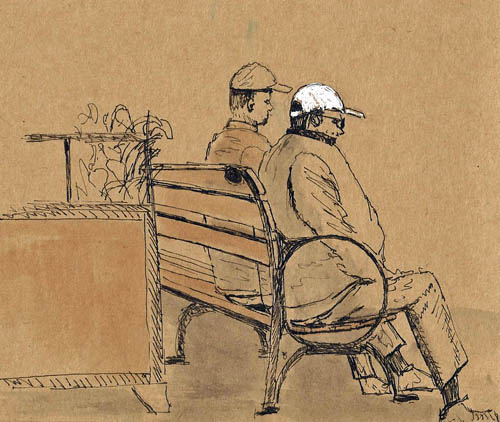 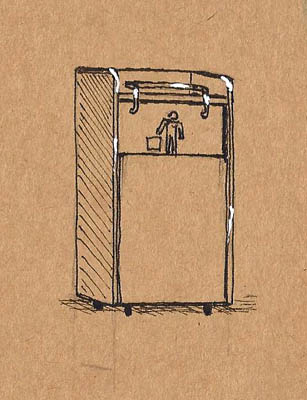 And so it went today as I went to sketch animals.  Instead, I drew these two animals, that were happy to move more slowly, content not to be chased or do any chasing.  And when I finished I realized I’d never sketched this kind of trashcan before so I’ve added it to my collection of trashcan sketches.  Not such a bad day afterall.