Last Saturday our sketching group, Le Collectif, held a sketching event at the Mt. Herman Cemetery.  It’s located just south of Sillery and stretches down to the cliffs overlooking the St. Lawrence.  This cemetery is nearly 200 years old, and contains, mostly, the remains of British, Scottish, and Irish people who did much to grow Quebec into what it is today.   And as you wander the rolling hills of the cemetery, below its canopy of old maples, ashes, and elms, you can’t help but be drawn to the names on the headstones, many dating to the middle of the 19th Century.

It must have been the case that marble was a lot cheaper back then than it is now as there’s a lot of it in this cemetery.  Tall, statuesque monuments, requiring a team of people to put in place, have stood for 100 years or more and they provide enduring symbols of what materials and craftsmanship can accomplish.

Our trip coincided with a memorial/commemoration of the retirement of the last of five Treggetts, that have acted as directors of the cemetery.  This was a bonus on the day as I got to meet Mark Brennan, the new director, his right hand, Maureen, and several other fine people who didn’t seem put off by my poor French and even allowed me to speak some English.  Oh…and they gave use cookies and coffee. 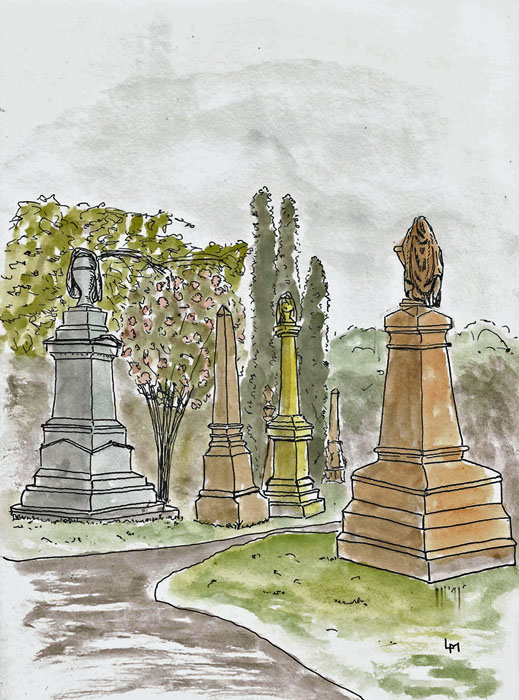 But it was sketching we came for so it was sketching we did.  The morning was cold, wet and windy so actually sitting down to sketch was a struggle, and bordering on foolhardy.  Ultimately I came across this scene and set about putting pen to paper.  There are dozens, if not hundreds of scenes like this so I hope to do more sketching here before it becomes too cold for outdoor sketching. 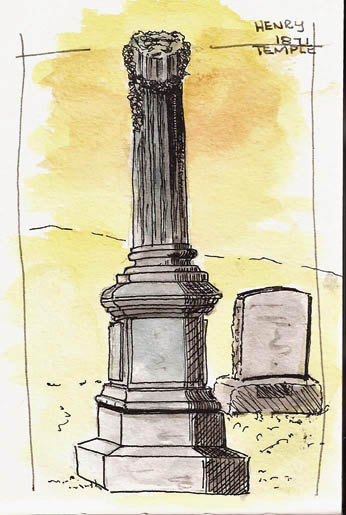 The cold morning fatigued me and it was hard to get onto the next sketch so I was slow in doing so.  Besides, the other sketchers were scattered around the grounds and I wanted to say hi and see what others were doing.  I’m nosey that way.  So, I did a lot of walking instead of sketching and it was fun.  I did sketch this headstone, dated 1871. 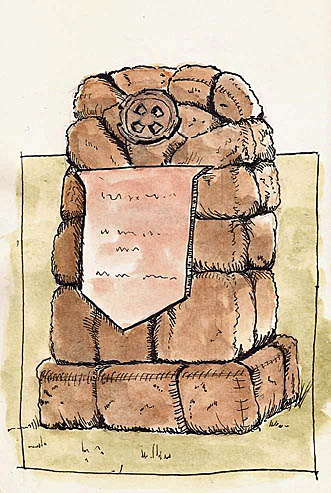 Fernande, my regularly sketching partner was there and we ate lunch together and chatted about the day.  By then the sun had come out and it sort of revitalized us a bit.  After this late lunch we started looking around for something that plucked at our 2PM sensibilities and I found it in this modest headstone, made of large, cast stones with a Celtic circle and plaque attached to it.  I found three in the cemetery that used similar construction, though each was unique.  I’m doing the ink-sketch-a-day event that’s going on right now so I approached this as an ink-only sketch, including a lot more hatching than I would normally add.  Then I decided to add some color anyway.

By the time we finished it was time to head up for the memorial.  Sadly, the time we were given for this was 3PM but by 2:40, when we arrived, the service was over.  We were, however, in time for coffee, cookies, and comraderie with some very fine folks.  Thanks, Mark and Maureen.  We had a great day.

2 Responses to “Sketching At The Mt. Herman Cemetery”