Quebec’s city hall is a gorgeous building that spans a hillside, the south end being somewhere around 20-25 meters higher than the north end.  It was built back before humanity decided that what a building looked like was unimportant as it was made operational at the end of the 19th Century.  It’s got pointy roofs with lots of gables, turrets and a very fancy entrance.

It’s also got a relatively new open area along the south wall, with a shallow pool and fountain and a whole bunch of inviting chair and table sets that, I’m sure were put there for sketchers, though it seems that downtown employees and tourists alike use them when they eat lunch.  That’s ok.  We sketchers are willing to share.

It was a sunny and, for this time of year, warm day as I arrived downtown.  I decided to sit and look around, my sketching equivalent of a dog circling before lying down.  I noticed the decorations over some of the windows and decided they would be my target.  They were beautiful.  They were challenging.  What more could a sketcher ask for?

I was trying a new ink, Noodler’s Red/Black.  I had filled a Lamy Safari with it and while it’s not my favorite pen, it was handy as a test bed.  Red/Black is a washable ink, and each ink has it’s own properties when it comes to how ink lines will respond to water so there’s always a step into the unknown when you add water.

For the second time I made the mistake of trying to do this step with a waterbrush and, more than a little bit, lost control over the washed ink.  Real brushes are the only way to go for this if you want to maintain any semblance of control – I’m not a fan of so-called “happy accidents.”  But it was a fun afternoon and I hope to repeated it soon, but with more control over the water. 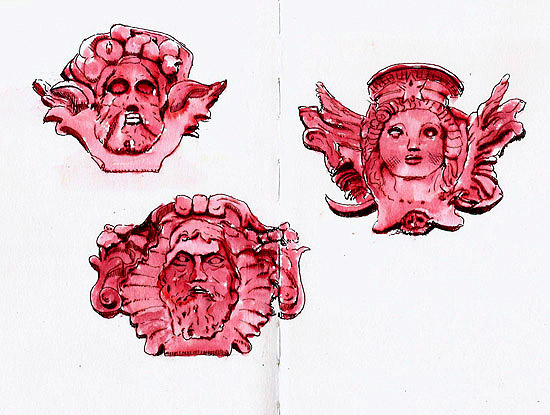