Everyone comes to Quebec City to see the “old city”, the portion of the city that has a wall around it.  It’s a UNESCO Heritage site and the architecture dates from the 16th Century to the present, though “present” is held back by significant building codes to retain this special place.

I live in the old city.  Not literally, but I spend so much time walking and sketching there that I claim it as a residence.  And last week, Louise arranged to sketch a statue that is inside the grounds of Hotel-Dieu, a hospital in the old city, so I tagged along with her, Claudette and Yvan.

Hotel-Dieu, a hospital with a reseach program associated with it, was founded in 1637.  I can only imagine what it looked like back in 1637 but since that time it has grown in patchwork fashion and is now represented by a hodge-podge of buildings – new and old.  You can see evidence of this when you enter some of its more modern portions only to see that they partially encompass old, stone construction in places.

But we were there to sketch a statue and it resided in a courtyard-like area that, itself, was the roof of an underground facility of some kind.  The statue, to me, was a disappointment and so I decided to sketch what is now an entrance to a larger building.  I’m not sure what it was originally as you pass through it, come out the other side, and then enter the large building from a small courtyard.  But it’s got a very odd shape and worthy of a sketch or three. 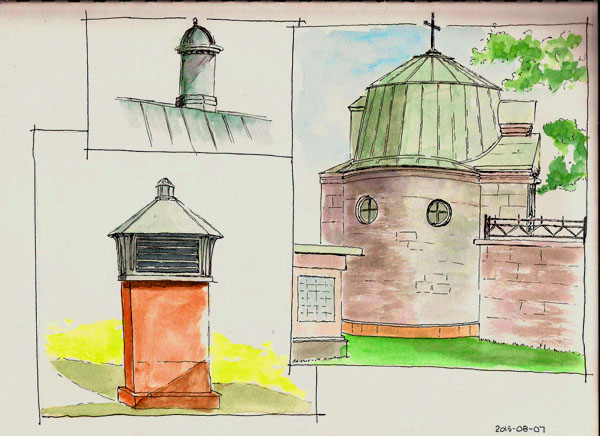 When others had finished up their statue sketching, we headed for a small park near the Hotel Frontenac, the “trademark” of Quebec City tourism.  We were there to sketch the statue on top of a large fountain in the park.  I’d done that before and wasn’t in the mood so I got out my toned paper ‘moustache’ book and started looking for targets.  Here are a couple of those sketches. 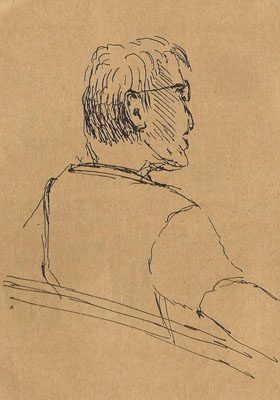 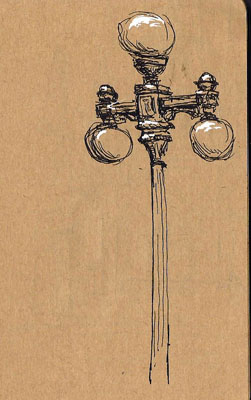 Everyone was nearing the end of their sketches and I only had a few minutes left so I just started drawing pieces of the fountain, which sort of spread across the paper like ooze from an oil spill.  The fountain is truly a complex affair and I only captured a small portion of it but there’s limited space in a 4×6 format (grin).  Like all sketching days, this was a good one. 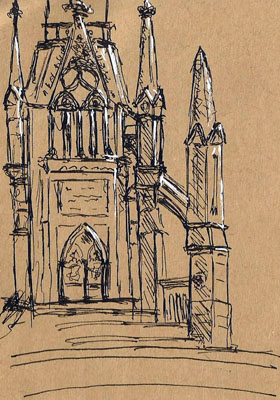 2 Responses to “Sketching At Hotel-Dieu In Quebec City”