I first came to Quebec City to do a post-doctoral fellowship.  That was to last two years and it did, and I left as I took a research position in Ontario.  More significant, though, was that during that period I met my wife.

I knew nothing of Quebec and even less French than I know now.  You can’t do much with a vocabulary that consists of bonjour, champagne and pamplemousse.  Why I knew the word for grapefruit is still a mystery to me.  If you’ve ever been in a city where you don’t speak the language, you know that sticking to tourist areas and shopping where prices are clearly marked is a survival skill.  I ate at McDonalds a lot because I could order by number.  And so life was for me.  Many parts of the city were off limits to me.

When I started dating my wife, she took me places I’d never been.  One of those places was Chez Temporel, a small cafe off the main streets.  Its facade would not be out of place in Paris and, at the time, the inside could easily have been a place where writers and artists went to talk and philosophize.  In fact, according to history, Chez Temporel hosted poetry readings and folk music on its second floor.

I discovered bol du cafe au lait (bowl of coffee with milk).  I’d never heard of drinking coffee from a bowl and, typically, I put nothing in my coffee.  But I LIKED this stuff, particularly the large volume of it that came in the bowl.  My remembrance of that first bol might be sweetened by the memories of a budding love affair but that’s another story, for another time. 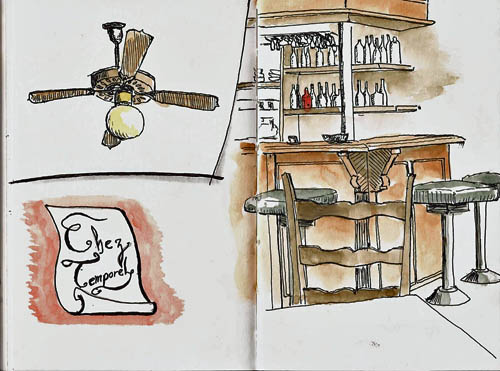 2 Responses to “Sketching At Chez Temporel”