I went to a large garden the other day.  It was overcast but warm and windless and the garden was nearly deserted.  I wandered around and finally decided to draw a scene that included an arbor that bordered one side of a central area in the garden.  I thought I’d show you the steps I took in drawing it.  The sketch was done as a two-page spread in a Stillman & Birn Beta (6×9) sketchbook. 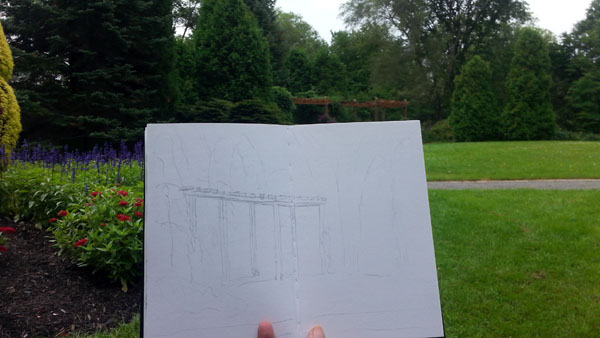 I laid out all of the objects in the scenes, most represented only by an irregular, but properly proportioned blob, but it’s during this stage that I get all my proportion thinking accomplished.  This solves two problems for me.  First, it’s too easy to start concentrating on details if I start with pen and then proportions take a back seat until it’s too late.  Doing this in pencil mentally separates it from “drawing” for me.  The second thing is that when I do pick up my pen, I no longer have to think about sizes of the objects relative to one another.  I know they will fit into their blobs and so I can really have fun while drawing. 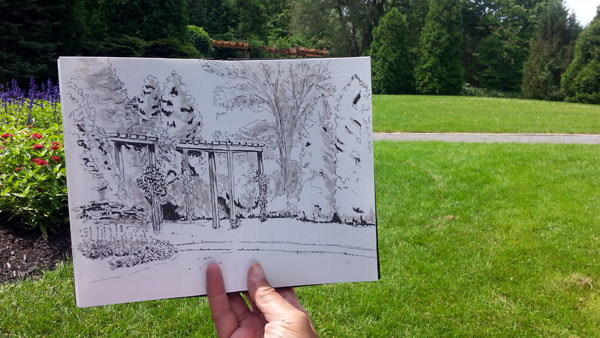 One could say that this is actually two steps.  I drew everything with a Namiki Falcon and DeAtramentis Document Black ink and then I added some darks with a Kuretake #13 brush pen.  If the darks are a second step, it’s a step I don’t do well with.  If it’s not a separate step, I still don’t do well with it.  I just don’t ‘get’ where I should put the darks and/or what marks work best to depict darks I see in the real world.  But in the end, this is what the ink drawing looks like. 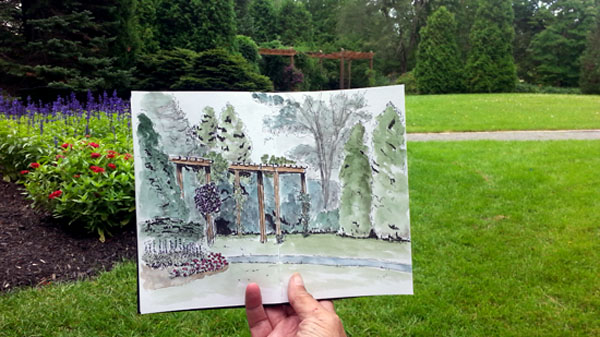 I’m really at a loss when it comes to watercolor techniques.  I can mix colors but I really have no clue what to do with them once they’re mixed (grin).  Nevertheless, this is what the sketch looked like when I was done.

I don’t always work this way.  Sometimes I skip the pencil stage and try to do the proportion/perspective stuff while drawing with ink.  I know the internet is fond of saying that ‘direct-to-ink’ is what real men do and that it’s faster.  While I think that nonsense, in my experience, it takes me longer to do a drawing like this when I skip the pencil step than when I include it.  Note, however, no erasers were abused in the creation of this drawing until the end of the ink stage when I run a kneaded eraser over the entire drawing to remove all the ‘blobs’ of the pencil sketch. 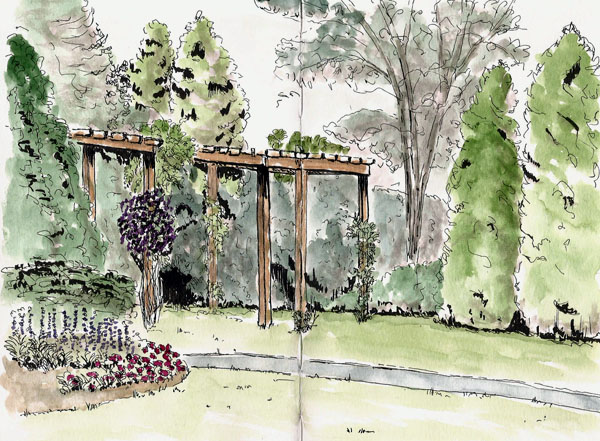 10 Responses to “Sketching Alone In A Garden”