You know those puzzles we had when we were kids?  They were cut from wood and had no more than half a dozen pieces, which matched with our little hands and puzzle-making abilities when were three.  Well, it seems, I drew one.

Not really.  In reality I was standing at the end of St. Denis street in Quebec City, looking up the hill at the depicted scene.  What was different was that I decided to paint it as a bunch of interlocking shapes.  As a basis for this I drew, in pencil, a very light box around the building and then drew boxes where the windows rested.

Then I grabbed a paint brush, a scary instrument in my hands.  You see, I’m trying to figure out a few things with watercolors.  I’m trying to figure out how to mix paints thicker than the pastel-like colors we beginners often use.  Mostly this has resulted in over-kill in my sketches but I’m making progress.  The other thing I’m investigating is whether I can sketch directly with a brush.  This is definitely putting the cart before the horse but it’s become a nothing ventured, nothing gained sort of thing for me.

Anyhow, I became overwhelmed with painting thoughts as I tried to ‘draw’ this with a brush.  I drew each shape, trying to “build the wash” (Holmes-style), avoid any outline effect, and also trying to keep the shape correct.  I was so consumed with those tasks that the thought of actually trying to draw the scene got lost in the shuffle.  After I’d created my kid’s puzzle, I used a pen to draw window frames and such but nothing was going to help this sketch much.  Interesting exercise.  It’s said that we learn from our mistakes.  I must have learned a lot with this one. 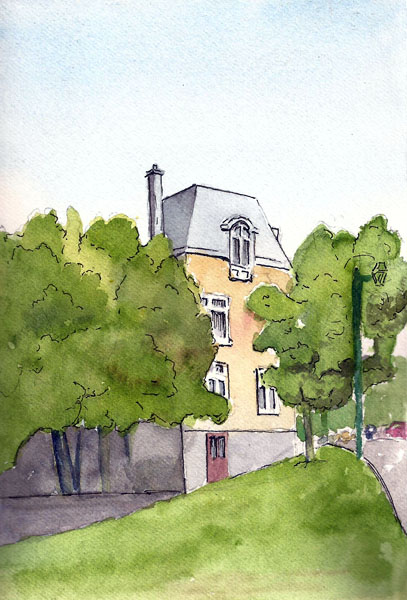 5 Responses to “Sketching A Kid’s Puzzle”