A minute later we were both in a hansom, driving furiously for the Brixton Road. – A Study in Scarlet

I’m a big fan of Sherlock Holmes.  Not the Robert Downey Jr. Sherlock.  Not the TV show Sherlocks.  I’m a fan of the original, as written by Arthur Conan-Doyle.  In those stories, Holmes and Watson were often travelling in hansom cabs.

Sherlock’s carriage equivalent of the taxi was, more precisely, the Hansom safety cab, designed by architect Joseph Hansom in 1834.  It’s interesting to note that “cab” is short for cabriolet, a French word for a 2-wheel, horse-drawn carriage.  It’s also where taxi cab comes from.

I’d never actually seen one until Quebec City’s Musée de la civilisation opened an exhibit of 13 representatives from a large collection of carriages.  I had to draw it.

I did this one in a Stillman & Birn Gamma (10×7) sketchbook.  It was the first sketch in my new, “Spring” sketchbook.  I hope you like it. 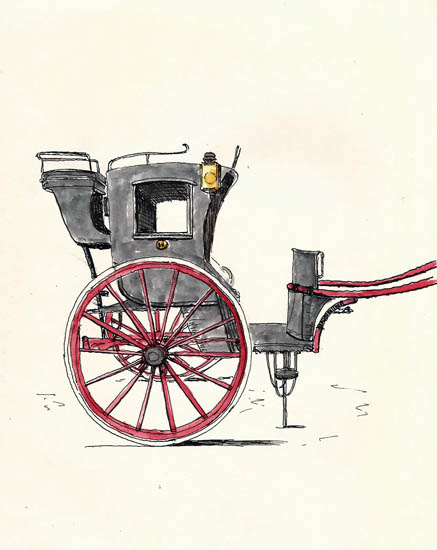 2 Responses to “Sketching A Hansom Cab”